On Monday, December 27, folklore expert Barbara Kirshenblatt-Gimblett will discuss the history of how Yiddish was included as one of the languages utilized at the POLIN Museum of the History of Polish Jews in Warsaw.

The talk, to be presented in English, is part of the week-long annual festival, “Yiddish New York” to take place from December 15 till December 30, 2021.

The POLIN Museum is actually the first and only one where visitors can get an audio tour in Yiddish. Even iconic Holocaust museums like Yad Vashem in Jerusalem and the United States Holocaust Memorial Museum in Washington, DC don’t offer this option. 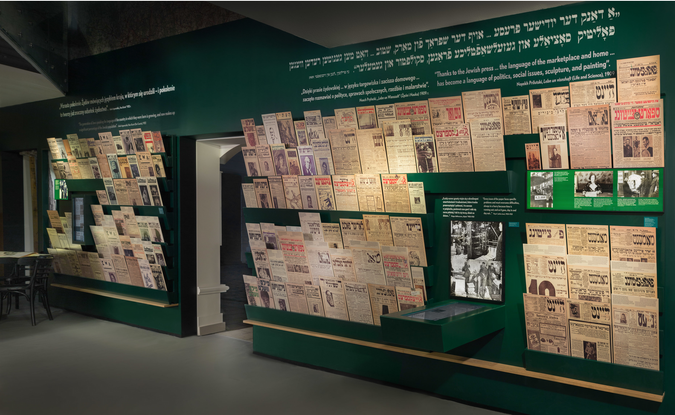 An exhibit on the Yiddish press in pre-war Poland at the POLIN Museum of the History of Polish Jews Image by M. Starowieyska D. Golik / POLIN Muse­um of the His­to­ry of Pol­ish Jews

At Yad Vashem visitors can get an audio tour in ten languages: Hebrew, English, Arabic, French, German, Spanish, Russian, Portuguese, Polish and Chinese – but not in Yiddish, which was the vernacular of the vast majority of the six million Jews murdered in the Holocaust.

The Washington museum offers the tour in fourteen languages, including Hungarian, Japanese, Korean, Italian, Turkish and Indonesian – but again, not in Yiddish.

Years ago, the late Yiddish language educator Gella Schweid-Fishman, told me that she had spoken to an official at Yad Vashem, requesting that the objects in the exhibit include not only Hebrew and English captions but Yiddish as well, considering the catastrophe that the language had suffered from the Nazi genocide. The official replied that it wasn’t necessary to do so, since nearly all Yiddish speakers today can read English or Hebrew.

Clearly, the official didn’t get the message. Schweid-Fishman didn’t suggest this for practical reasons, but rather for the powerful symbolism it would have carried, utilizing a Jewish language that the Nazis had been so intent on annihilating.

The lecture about the POLIN Museum’s decision to include Yiddish will take place on December 27 at 9 am. To register, click here.