Growing up, as a mixed race child, with survivor grandparents

Kyla Kupferstein Torres describes how her yiddishkeyt was sparked by her Buba and Zayda and what her Jewish journey has been like. As a child growing up in the 1970s and 80s, my younger brother David and I did everything in Manhattan: it was where we lived, went to school and played with our friends.

Except for the weekends when my parents would take us to visit my grandparents in the Kingsbridge section of the Bronx. Buba Fela and Zayda Hershl lived in the Amalgamated Houses on Sedgwick Avenue – a cooperative apartment complex that functioned like a reassembled shtetl, a Yiddish-speaking community of Jews from Eastern Europe who had somehow escaped or survived the Nazi genocide and lived to tell the tale.

As my brother and I (known at our grandparents’ home as Kylashi and Davittle) sat at our grandparents’ kitchen table, we were fed a steady diet of Holocaust talk. “The war,” they called it, when they spoke English, which they did only for us. Hitler, Stalin, the camps – all these were a part of their normal vocabulary. And their neighbors, some who had been my grandparents’ friends back in Warsaw, most of them Bundists ranging from agnostic to atheist, were the closest thing to an extended family that we had.

Unlike many other survivors who kept silent because they couldn’t bear to revisit the atrocities, everyone in this community told their stories openly; we waited for those stories, just as we waited for Buba’s misshapen cookies and trips to the sprinklers in Van Cortlandt Park. Countless times we heard the story of how they left: when young men were urged to leave Warsaw because of Hitler’s imminent arrival, my Zayda, Herschel, decided he couldn’t leave without his love, Fela. Her grandfather quickly married them, and they fled to Russia, innocently believing it would be safe for them as socialists. But they were arrested at the Russian border, and then jailed separately in Stalin’s prisons in Siberia.

Maybe our grandparents and their neighbors were able to talk about their experiences because they didn’t see Treblinka, or Dachau, a shower or an oven; instead they were in Stalin’s gulag. Or maybe they were so stunned to be alive and safe in America, that they had to repeat the stories to remind themselves that their escape was real. 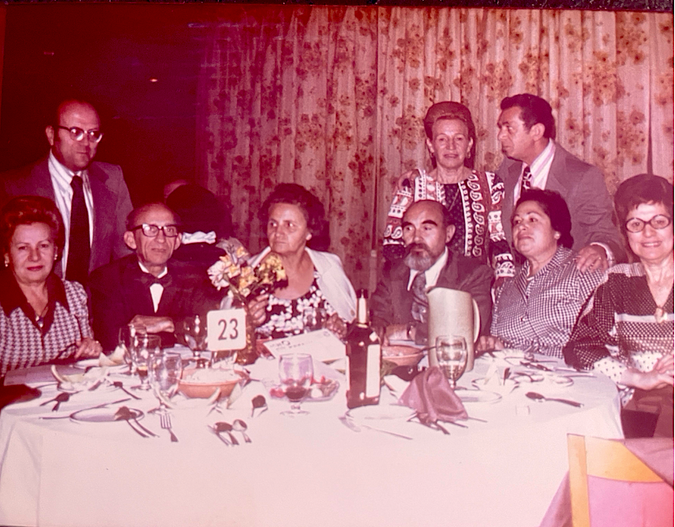 As Bundists my grandparents and their friends believed it was crucial to uphold a secular Jewish culture in Yiddish for future generations. They founded a socialist summer camp near Bear Mountain about two hours from the city. At Camp Hemshekh, which means continuation, my father and the other children of these survivors spent their summers swimming, boating, singing Yiddish songs and American folk songs like the ones Joan Baez sang, learning about khavershaft (goodwill) and the principles of freedom, democracy, international justice and brotherhood.

Maybe my father took this message a little more to heart than his parents expected. When he went off to medical school to fulfill his duty as a good Jewish son, he fell in love with a Black Jamaican woman. My Buba and Zayda believed in their values – but were also clear that their son was meant to marry a Jewish woman. It didn’t go that way.

Yet in spite of their initial objection to their marriage, it didn’t take long for my grandparents to come around, charmed by my mother whom they came to love. And my mother helped keep us close to them and to our roots as Jews, the grandchildren of survivors. Buba and Zayda told their stories to remind us of our family history, but my mother emphasized not only our grandparents’ strength but also how harrowing much of their, and our father’s, experience had been. It was important that we were here in America – the “first Yankees” in the family, my Zayda called us – and that we respected where we came from. So although there was no religious observance in my life, I always knew I was Jewish and felt deeply that this was a core part of my identity. There was, of course, the little issue of my mother not being Jewish. It didn’t come up often, but it bothered me, as if somehow I wasn’t permitted to claim the identity I’d been taught to uphold and protect. And there was no joining my many Jewish classmates who went to Hebrew school twice a week to prepare for bar and bat mitzvahs. Where my grandparents had been principled atheists as part of their socialist allegiance, my father took it to the next level: he vehemently opposed religion. If there was a benevolent force that people called God, the Holocaust never could have happened, he said. As far as he was concerned, Hitler proved religion false, and he could barely contain his irritation while sitting through a bar mitzvah in a synagogue. 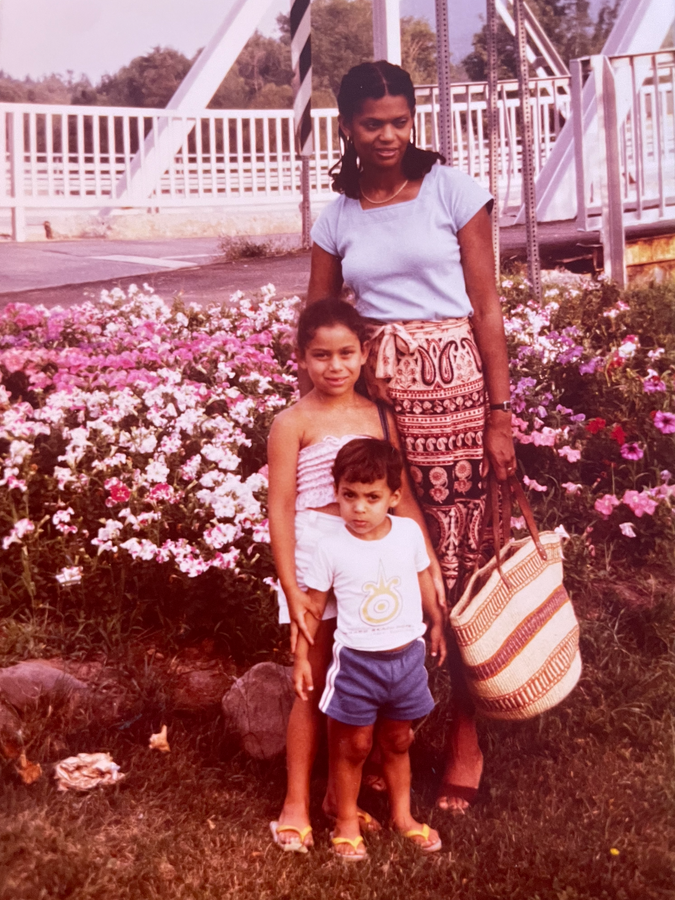 Kyla and David with their mother, Annette Courtesy of Kyla Kuperstein

Yet we never missed a Rosh Hashanah meal or Passover seder (albeit ones without prayers) up at his parents’ apartment. And I was puzzled about the Tanakh (Hebrew Bible) and the two volumes of Talmud on our bookshelves. He must have bought them, but why? The holy books sitting in the living room, their spines uncracked, their words unread, reminded me that even for my father, being Jewish couldn’t be totally disconnected from Judaism. I’d been raised without faith, but as I got older and began to venture into the world alone, I hungered for something more. Maybe not to be religious, but to be Jewish in a deeper way than a love of my Bubba’s chopped liver, remembering the khurbn (the Yiddish word for the Holocaust) and throwing around words like tsuris and nakhes. I needed a little neshome, or soul.

I wish I could say that I ran down to the YIVO Institute for Jewish Research and enrolled in a Yiddish course, or found some Reconstructionist congregation that wouldn’t bat an eye at my not having a Jewish mother or at my race. But my connection to Jewish practice came slowly, and on my own terms. First, I started to have occasional Shabbat dinners in my single-girl apartment, even before I got married, before I had a proper dinner table at which to serve my guests.

I started going to tashlich every Rosh Hashana, a ritual where you symbolically cast off your sins of the previous year by tossing bread crumbs into flowing water. This ritual felt intuitive and fitting for a time of renewal, one that was easy to make my own. Then when I became a mother, something clicked. Just as it had been my parents’ and my grandparents’ role to teach me who I was, it was now my job to teach my son, Naftali, who he was. His Puerto Rican father would ensure he spoke Spanish; we would both teach him that although he was Black in the United States, he was free, and I would raise him as a Jew.

I reach for what pieces of Jewish practice feel natural to pass on to Naftali. We eat challah and light candles on shabbat, and if we’re with our friends who aren’t Jewish, we invite them to witness and share the ritual with us. We spend the High Holy days with a group of mothers who are also Black and Jewish. We call ourselves the Afro-Semitic Sisters, and their children are like cousins to Naftali. 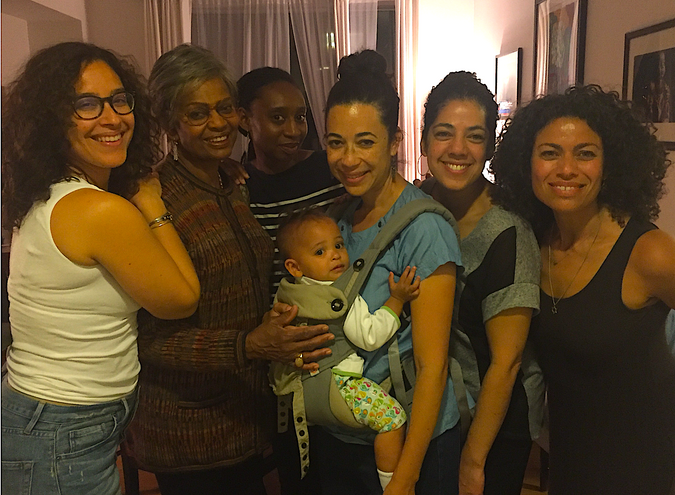 Each night that I put Naftali to bed, we say the shema prayer. Sometimes, he asks me why we have to do it.

“Because we’re Jewish, papi,” I tell him. “Because it reminds us who we are, and that the Jewish people are still here.” 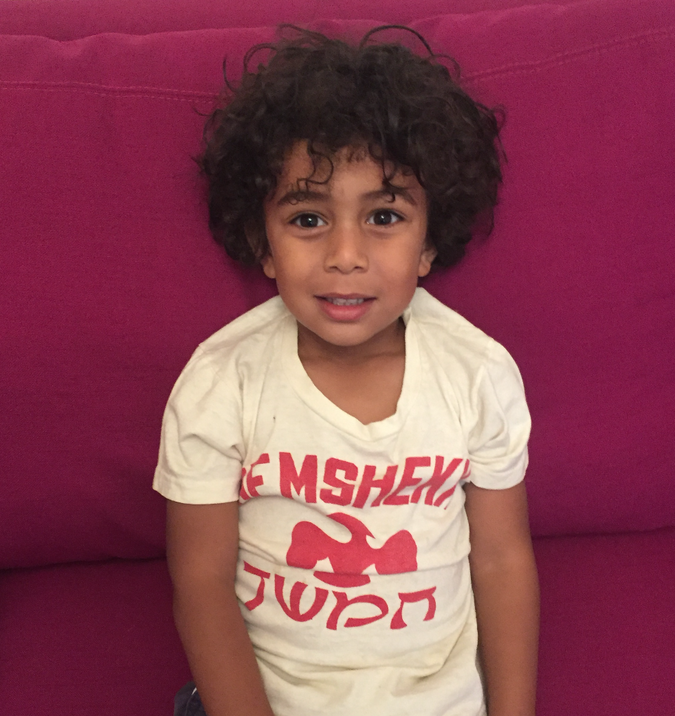 Kyla’s son Naftali in 2017, wearing the official T-shirt of Camp Hemshekh, an institution which her grandparents helped create. Courtesy of Kyla Kupferstein

Growing up, as a mixed race child, with survivor grandparents