The Last Man To Bear Witness to Independence 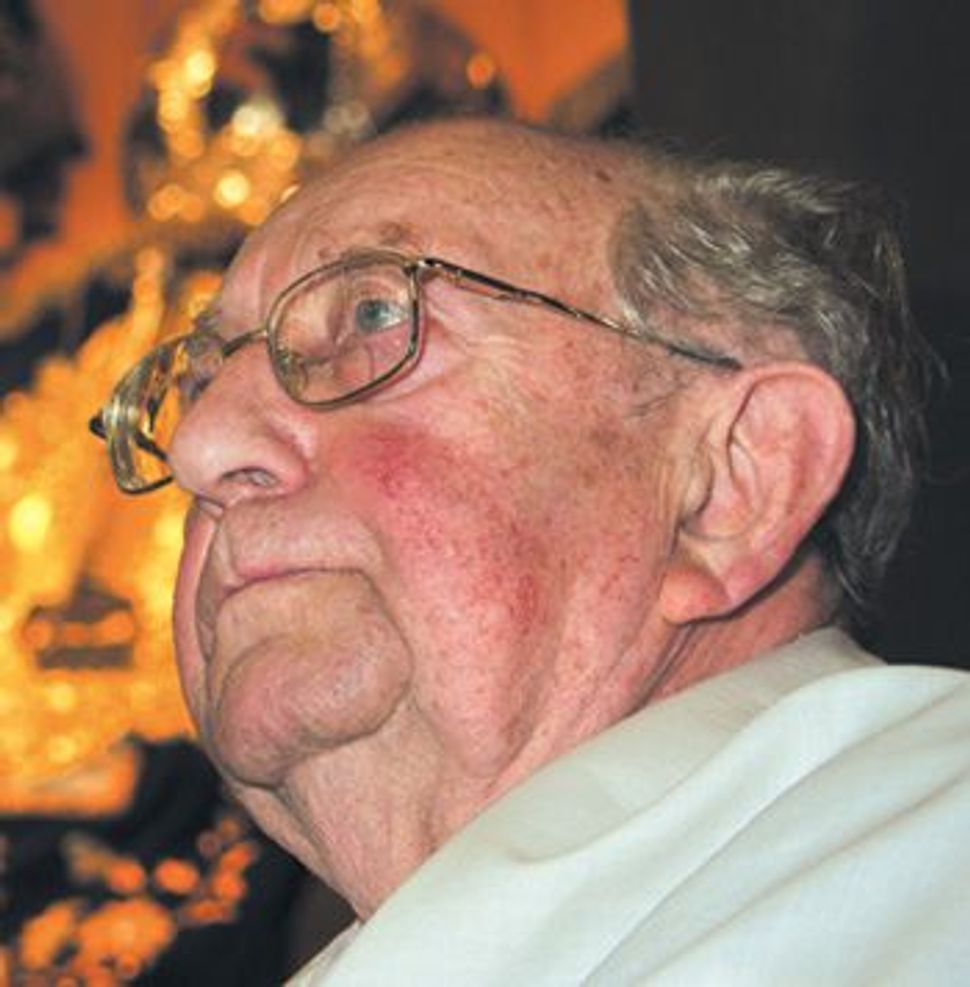 Best Day: To Arieh Handler, the Israeli independence proceedings were the ?greatest day of my life.? Image by JONNY LIPCZER

On Yom Ha’atzmaut, several million Israelis will celebrate the 61st anniversary of their country’s Declaration of Independence. But only one of them was there for the actual event.

Of the 200 Zionist leaders who gathered in Tel Aviv’s Museum Hall to witness the birth of the Jewish state, only Arieh Handler, now a sprightly 94-year-old, is still alive. 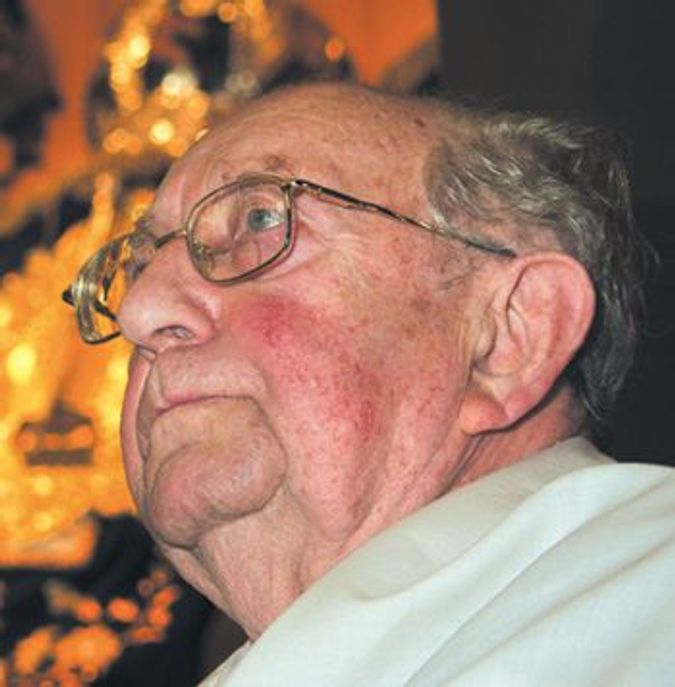 Best Day: To Arieh Handler, the Israeli independence proceedings were the ?greatest day of my life.? Image by JONNY LIPCZER

Back then, Handler was a 32-year-old new immigrant, a member of the body that managed Zionist affairs in what was then the British Mandate for Palestine — the Zionist General Council of the World Zionist Organization —and he was a neighbor of David Ben-Gurion.

On May 13, 1948, a motorbike courier showed up at the Tel Aviv apartment where Handler lived, and gave him an envelope. When Handler asked about its contents, the courier told him his lips were sealed: It was a confidential package.

Inside the envelope, Handler found an invitation to the Israeli Declaration of Independence. The invitation remains one of his most prized possessions.

It included a request to keep arrangements secret. The Zionists feared that knowledge of the event might cause the British to stop it from taking place, or give Arab nations, which opposed the formation of the new state, a chance to plan a better or an earlier attack.

But word got out. When Handler arrived at the proclamation ceremony, there were already huge crowds surrounding the hall, waiting to celebrate.

“For me,” Handler reminisced, “the day of the declaration was the greatest day of my life. None of us had believed we could do it, and we didn’t know if it would succeed, but there we were, declaring independence.”

Today, Handler, who has a wise and friendly visage, lives in a meticulously well-kept apartment filled with mementos and photographs, in the West Jerusalem neighborhood of Kiryat Moshe. He has many visitors, including a large number of family members who stop by regularly. He also receives groups of youngsters who want to hear about his experiences.

Back then, Handler was not only invited to the declaration — he had helped to make it happen.

A few weeks before the event, when it was unclear whether the Zionists would push ahead with plans to declare independence, Handler had been a vocal proponent for creating the state.

Though he had been living in Palestine for only two years, he had been instantly welcomed into the Zionist elite. He arrived as something of a hero, because he had rescued dozens of young people from his native Germany as a director of the Youth Aliyah program and then set up a British arm of the religious-Zionist youth movement Bnei Akiva.

In Palestine, he was a key member of the labor religious-Zionist movement known as Hapoel Hamizrachi. This meant he was invited to the top-level World Zionist Organization meeting convened in April 1948 to make plans for what would happen after the British Mandate expired.

Delegates from various Zionist parties sat around small tables in a Tel Aviv school hall. Top of the agenda was how the Zionist movement should respond to a Washington, D.C., proposal to abandon the plan adopted the previous year by the United Nations, in which Palestine was to be portioned into two states, one Arab and the other Jewish, and replace it with a U.N. trusteeship until a new solution was found for the region. Handler vocally opposed this prospect.

Though by the end of the meeting, all parties were unanimous in pushing for statehood, Handler said there was more division on the issue than people now imagine. He recalls clashing on the issue with party elder and renowned Rabbi Meir Berlin, who later Hebraized his name to Bar-Ilan.

The month between this meeting and the Declaration of Independence was a time of great uncertainty, he recalled. Even in the hours before the planned declaration, telegrams arrived from President Harry Truman and his Jewish associates, pleading with Ben-Gurion not to go ahead.

The discussions at the highest level continued even as those gathered for the declaration were being hushed so that the proceedings could begin. Handler remembered: “I was sitting in the hall next to [communist faction leader and Declaration of Independence signatory] Meir Wilner, who said, ‘I want to see what Stalin will say.’ I said to him, ‘If we don’t do it today, there will never be a State of Israel.’”

Once the proceedings got started, the assembled were keen to get things wrapped up quickly, partly because it was a Friday and the Sabbath was near, and partly because people feared, correctly, that war was imminent. Handler jokes that as well as making history by declaring statehood, the session did so by running more punctually than any Israeli event since, and by having a dress code of “smart” attire, a real rarity in Israel.

When the session was over, Ben-Gurion approached Handler and asked him to take care of Yehuda Leib Fishman, later known as Maimon, the rabbi who blessed the new state. After settling Fishman into a hotel, Handler went to join the celebrations. “I can remember that the Egyptian army was dropping bombs over Tel Aviv, but we were still out in the streets, dancing,” he said. “We felt we had to be there; we felt we just had to celebrate. I danced until the morning.”

In the years that followed, Handler was close to most of the country’s leaders. When he talks now of Golda Meyerson (he still hasn’t got used to calling her Golda Meir), Berlin (even with a university to remind him of his “new” name, he still hasn’t got used to calling him Meir Bar Ilan) and the legendary religious Zionist leader Yosef Burg (described, whenever mentioned, as “my friend who was like my brother”), Handler is not namedropping, just reminiscing about his social circle.

He regularly proposed ideas to his friends and acquaintances about how the state should develop. When he visited Ethiopia in the early 1950s, he was one of the first Zionist leaders to go, and on his return, he started to push for an Ethiopian aliyah.

For much of Israel’s statehood, Handler has lived in London. He first went in 1956 on the request of Israel’s second prime minister, Moshe Sharett, who wanted him to build up Migdal Group, the insurance company that was owned by Bank Leumi. He returned to Israel for several years in the 1960s, and then in the 1970s he went again to London, this time working in banking and building up religious Zionist institutions.

He became a well-known figure in British Jewry, and has been an icon for generations in the youth movement he established. Even in his 80s, he attended its weekend events, singing camp songs with members 70 years his junior.

At 90, he returned to Israel with his wife, Henny, who’s now deceased, and moved into the Jerusalem apartment where he now lives.

This year, Israel will celebrate Independence Day beginning at sundown April 28, a date that is set by the Hebrew calendar. In many respects, the Israel born in 1948 exceeds the expectations he had that day. The state, he says, is more advanced than he ever dreamed it would be, and its citizens are “largely good people.” But he complains about contemporary leaders, saying he is “deeply disappointed in all of them.”

“We don’t have leaders like the early leaders anymore,” he said. “When I think of the government today and what we had, there is no comparison. The people running the country today do not know what the people need.

“I believe that this country can be something of importance, but none of our so-called leadership, the new government included, knows what the state should be.”

The Last Man To Bear Witness to Independence