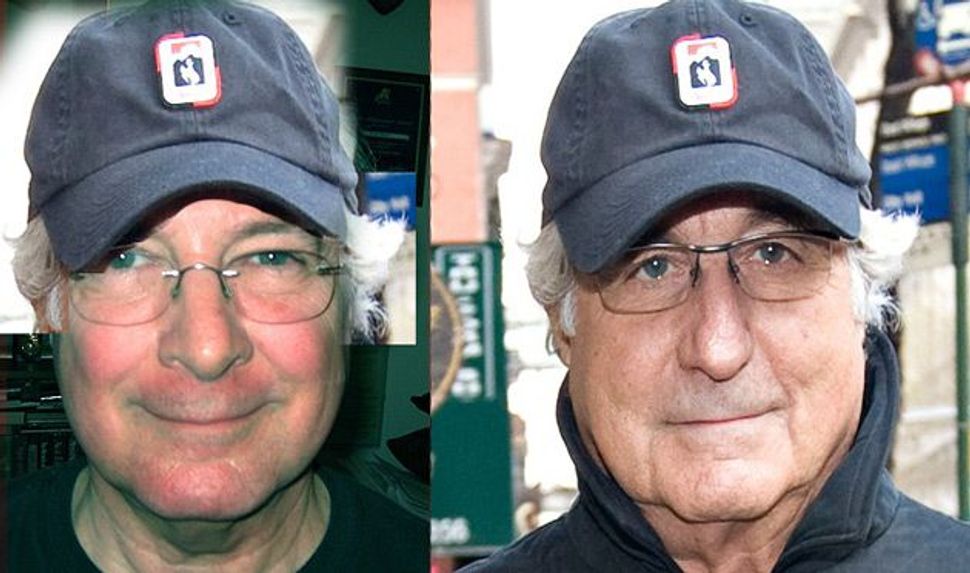 Watch out, Bernie, your doppelganger is about to make his grand entrance.

Paul Cohen, a Jersey City, N.J., resident and newspaper advertising executive, has been cast as America’s most notorious con man in the upcoming feature film “Madoff: Made Off With America.”

Cohen, 64, learned in May that he landed the plum role, beating out 45 other Madoff hopefuls. And in doing so, he also landed his first-ever acting gig. The film’s director, writer and producer, Edmund Druilhet, told The Shmooze that he feels lucky to have found someone who so closely resembles the Ponzi schemer, who is referred to on the film’s Web site as “the Satan of Wall Street.”

“[Cohen] had the best lips,” said Druilhet, who also produced the film “Polanski Unauthorized.” “I have to say he stood out.”

Besides an uncanny resemblance to the swindler from Manhattan’s Upper East Side, Cohen and Madoff share other commonalities. Both are Jewish, have April birthdays and attended school in the Far Rockaway section of Queens. And they both know how to sell.

“Being a salesman all my life, it’s like a first cousin to acting,” said Cohen, who sells advertising space at the Hudson Reporter, the Jersey City newspaper that first reported his role in the movie. He will begin filming later in June.

Cohen, who will go by the stage name Paul Cole, learned about Druilhet’s movie when he read a Page Six item in the New York Post announcing auditions for Madoff lookalikes. At his wife’s encouragement, Cohen sent in photos, and he was later called for a screen test in Los Angeles.

While an acting gig may be new territory for Cohen, he has grown accustomed to being mistaken for Madoff. Recently, as Cohen sat in the waiting room of his doctor’s office, another patient’s stare made him feel uncomfortable. The man finally apologized to Cohen for staring, but not before asking if his name was Bernie.

Nevertheless, Cohen said he’s ecstatic about the gig, even if it interrupts long-standing plans to buy property and retire with his wife to Florida.

Were they, by any chance, looking to lay down roots in Palm Beach?