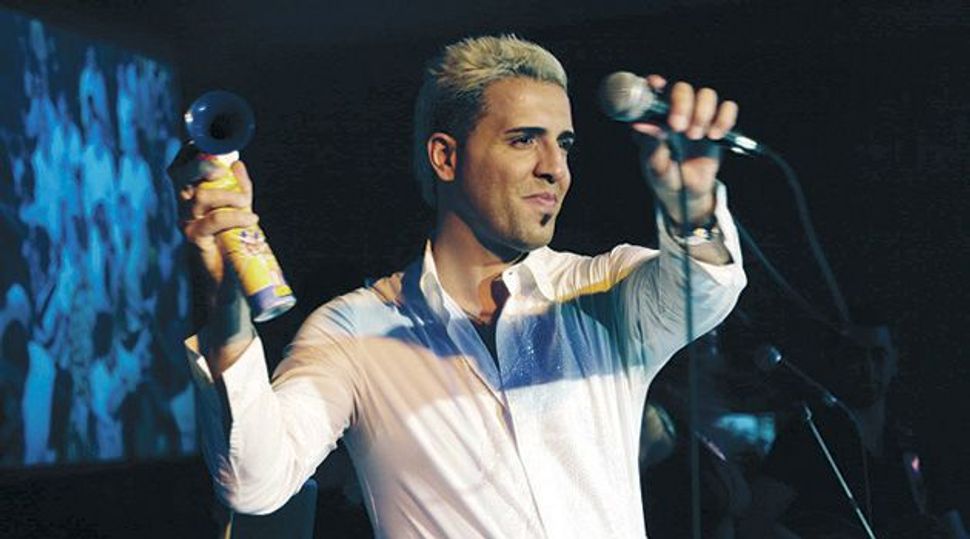 Traveling North: Eyal Golan (above) and Kobi Peretz, along with 16,000 Hasidim, made the trek from Israel to Ukraine for Rosh Hashanah. Image by HOT TELEVISION

A small group of Israel’s top entertainers returned home after Rosh Hashanah from a traditional holiday pilgrimage — to Ukraine.

Top-selling musicians, including Eyal Golan, Lior Narkis and Kobi Peretz, arrived back in Israel on September 21 after celebrating the New Year in Uman, a city in central Ukraine that has become a major destination for Hasidim around the world at the turn of each Jewish year. Home to the grave of Rabbi Nachman of Breslov, great-grandson of the Baal Shem Tov and a key figure in the revival of Hasidism two centuries ago, the city has become a mass pilgrimage site since the fall of the Soviet Union — and now evidently plays host to secular celebrities alongside tens of thousands of Hasidic visitors.

First reported on Israel’s Channel 2 News Web site, the entertainers took their trips to Uman separately, with the exception of Golan, who was joined by TV comedian Eli Yatzpan. Like their more religious counterparts, the performers brought their own, presumably kosher, food but stayed in private “villas” in the area.

Long considered a holy site for Rosh Hashanah observance by Breslov Hasidim, Uman’s most famous grave was off-limits during communist rule, though a limited number of clandestine visits continued to take place. The breakup of the Soviet Union has led to a dramatic rise in Rosh Hashanah visits to the site, attracting an estimated 16,000 Israeli Hasidim, who arrived on dozens of flights chartered directly from Tel Aviv.

The visit by the tattooed Golan and his counterparts suggests the continuing evolution of Uman’s role in Israeli religious practice. Beyond their celebrity status, the entertainers stood out from most of their fellow travelers because of their family backgrounds, rooted in such places as Yemen and Iraq rather than in Eastern Europe.