Jon & Shmuley Plus Another Media Circus 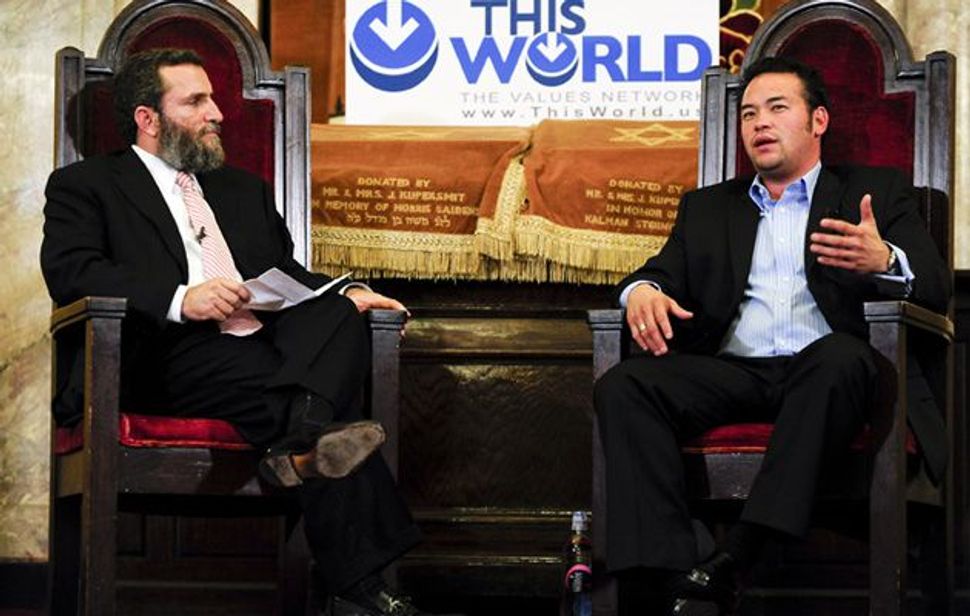 Open Dialogue: Jon Gosselin, right, announced at a forum on November 1 that he will seek counseling from Rabbi Shmuley Boteach. Image by GETTY IMAGES

Reality star Jon Gosselin, who has been plagued by a storm of ugly tabloid rumors, has been seeking to avoid more media attention. So, his recent decision to participate in a public forum — or as many media outlets are referring to it, an “apology show” — with yet another personality known for cultivating the spotlight came as a surprise. Gosselin, 32, joined Rabbi Shmuley Boteach at the West Side Synagogue in Manhattan on November 1 for an event titled “Fame: Blessing or Curse?” Run by Boteach, the discussion was billed as a “raw and intimate dialogue on the ethical challenges and moral responsibility of celebrity.”

“I am well aware that my behavior over the past few months has not always reflected my personal and religious values,” Gosselin said in a statement released to the press. “I further accept that I have allowed myself to…be carried away by the challenges of fame.” Gosselin, in addition to announcing regular study sessions and counseling with Boteach, said, “I am committed to making things right with Kate and especially my children.”

The former star of the TLC hit reality show “Jon & Kate Plus 8,” about the pair and their eight children — a set of twins and sextuplets — showed up at the event minus his signature earrings and on-again, off-again girlfriend, Hailey Glassman. The event was an attempt at damage control after recent scathing media reports about Gosselin’s behavior that surrounded his recent departure from his marriage and the show.

Boteach, who bills himself as “America’s Rabbi,” starred on the TLC show “Shalom in the Home,” in which he counseled families on marital problems and related topics. He is also known for his association with deceased pop star Michael Jackson, who is the subject of Boteach’s recent book, “The Michael Jackson Tapes,” which documents their private conversations.

Jon & Shmuley Plus Another Media Circus