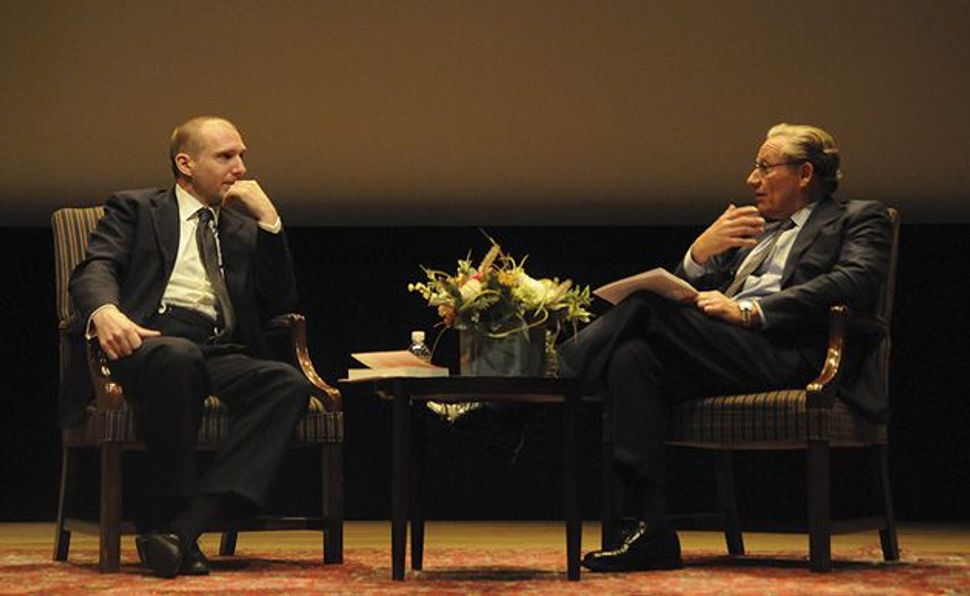 ‘Do you have to be handsome to play the role of a Nazi commander?”

That was a question that actor Ralph Fiennes was asked during a January 9 discussion, titled “The Power of Film and the Holocaust,” at the United States Holocaust Memorial Museum in Washington. Fiennes didn’t have a clear answer.

The British actor, whose role in the film “Schindler’s List” as Amon Goeth, SS commander of the Plaszow concentration camp, was described by director Steven Spielberg as “sexual evil,” did not rule out the part that aesthetics played in the Nazi propaganda machine. He recalled his first fitting of the SS uniform in his trailer on the Krakow, Poland, set of “Schindler’s List.” “The uniform is designed to have an impact,” he said.

Washington Post investigative reporter Bob Woodward, who moderated the discussion, suggested that the actor bears a striking similarity to Vladimir Putin, and asked whether he would like to portray the Russian leader in a film.

Aside from playing a Nazi SS officer in “Schindler’s List,” Fiennes played the role of a Jewish Holocaust victim in the film “Sunshine” and a lawyer in a romantic entanglement with an SS prison guard in “The Reader.” “You feel wiped out after playing these scenes, you feel empty,” he said when describing the moments after the director calls “cut” and the actor is left with his thoughts.

Woodward, making a comparison between jihadist terrorists and the Nazis, asked Fiennes if he’d play the role of Mohammed Atta, the mastermind of the 9/11 terror attacks, whom Woodward sees as “the modern [Amon] Goeth.” Fiennes objected to the comparison, but said he would be willing to play such a role were it offered to him.

Sara Bloomfield, the museum’s director, noted that the Holocaust remains a popular theme for movies around the world. Eight of the 65 films submitted for Oscar consideration in the foreign film category last year dealt with World War II or the Holocaust.