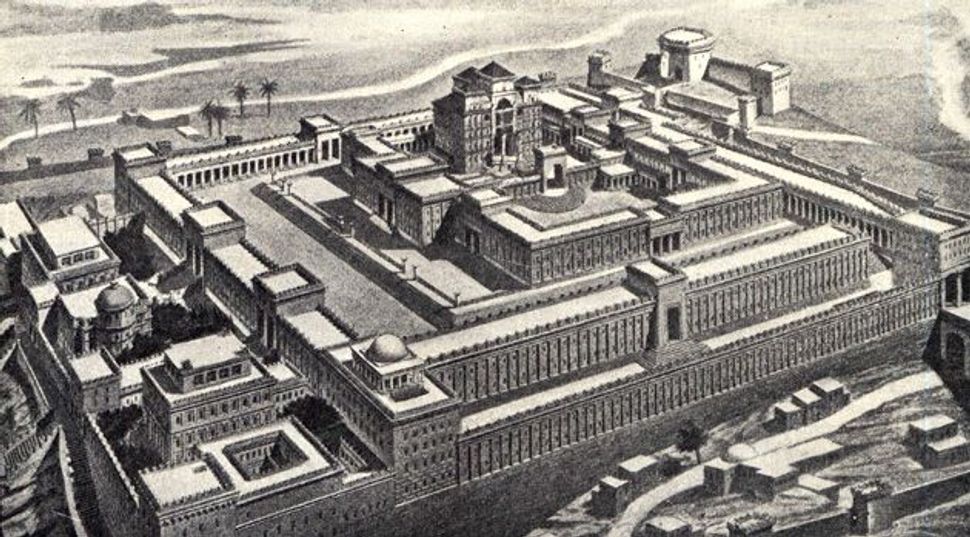 Solomon?s Temple: A sketch based on Bible descriptions. Image by WIKI COMMONS

Three times each day, strictly observant Jews pray for the rebuilding of the Temple. Their prayers have been answered. Well, sort of. King Solomon’s Temple, which was destroyed by the Babylonians in 587 BCE, is finally going to be rebuilt — in São Paulo.

The Universal Church of the Kingdom of God, a Brazilian Pentecostal church that claims 8 million followers in 180 countries, received planning permission in late July to construct a 10,000-seat replica of the holiest site in Judaism. “We are preparing ourselves to build the temple, in the same mold as Solomon’s,” Bishop Edir Macedo, the church’s founder and leader, said in a televised service posted on his blog.

The church has signed an $8 million contract to import Jerusalem stone, which was used in the construction of the First Temple, from Israel. The building, which will be designed by Brazilian architect Rogério Silva de Araújo, will stand at 180 feet tall, nearly twice the height of the iconic Christ the Redeemer statue that towers over Rio de Janeiro. The Temple will house a replica of the Ark of the Covenant, and the complex will include classrooms for 1,300 students, and spaces for television and radio studios, according to the Guardian.

UCKG, which was founded in 1977, promotes “prosperity theology,” where acts of faith and donations are rewarded with material wealth. In 2009, the church came under scrutiny for its finances during the previous decade. Macedo and nine other senior members of the church were accused by Sao Paulo’s public prosecutor of stealing billions of dollars from donations to UCKG, though they have yet to stand trial.

Most Jews believe that the Temple should not be rebuilt until the era of the Messiah, though Macedo’s blog commented on the possibility of the rebuilding of it in its original location: “For Jews, there is still hope that the Third Temple is constructed so that the Messiah will reign with them. But for that to happen, they will have to expect some natural disaster or governmental changes.”