The 1970s: Judaism and the Territories 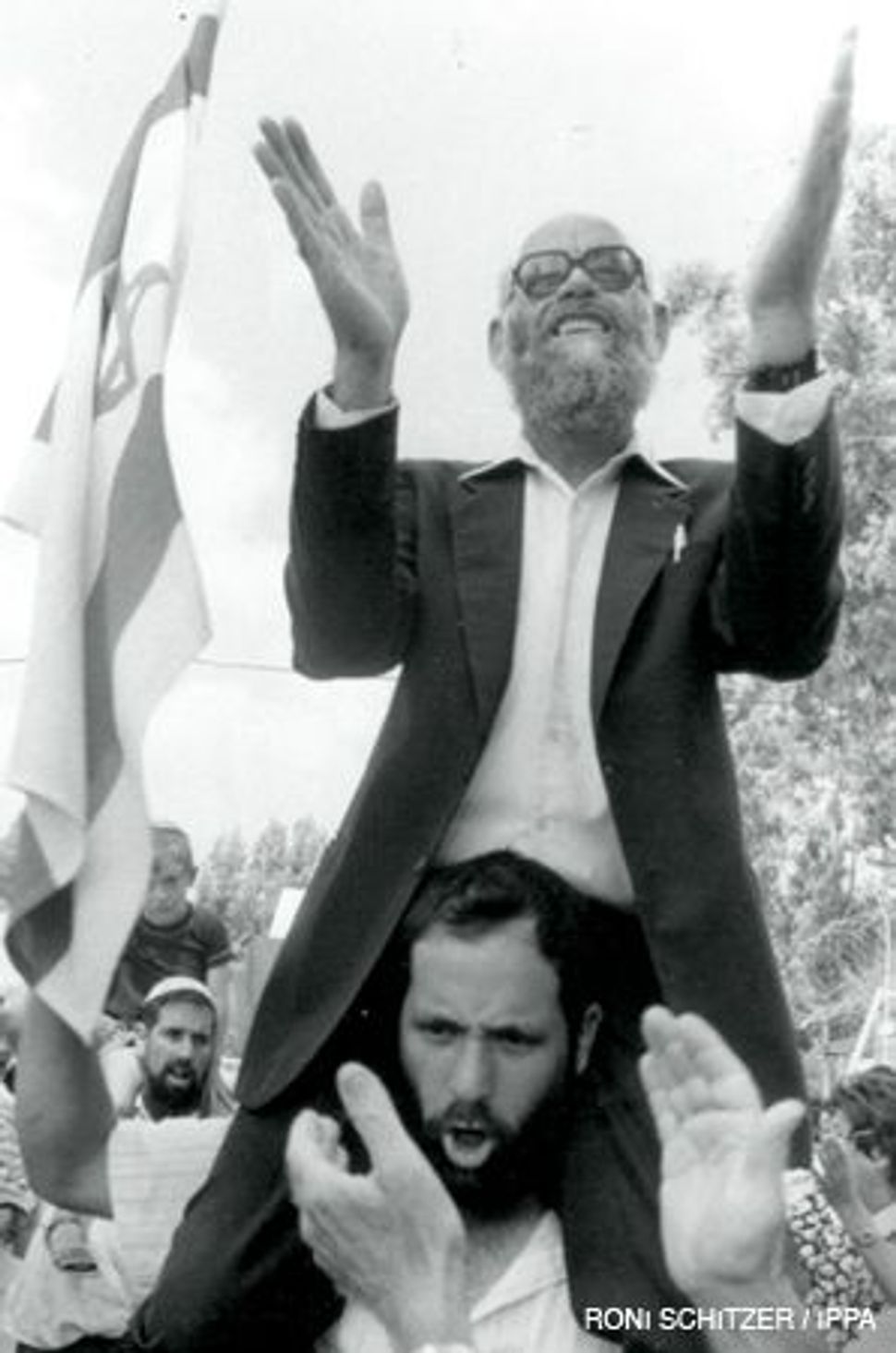 West Bank: Rabbi Moshe Levinger, a religious Zionist, was a leading figure in the settler movement after the Six Day War, spearheading Jewish settlement in Hebron and playing a large role in Gush Emunim. Above, supporters carry Levinger away from the gates of Eyal prison following his release in 1990. He had been imprisoned for three months for killing an Arab shopkeeper in Hebron.

Charles Dickens might have characterized the 1970s in Israel as both the best of times and the worst of times. Few people could have experienced the decade’s contradictions and paradoxes more acutely than a young, religiously observant immigrant to the Jewish state, as I was. It was the decade in which Israelis began settling into their new role as rulers of the West Bank, and the Palestinians began fighting in earnest. It was a time of social ferment and political change. 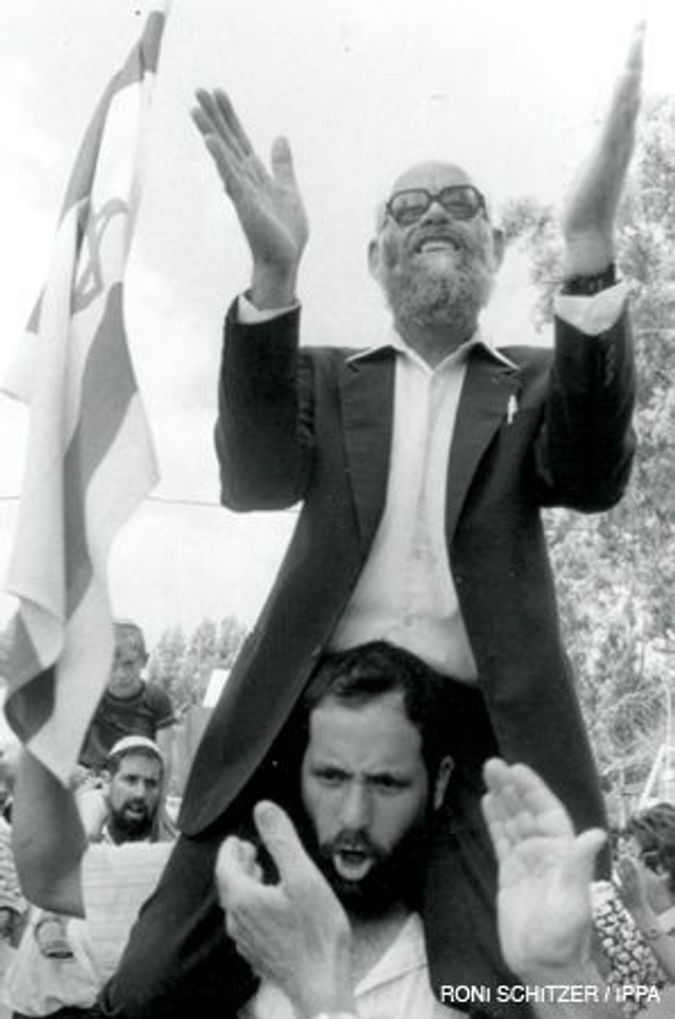 West Bank: Rabbi Moshe Levinger, a religious Zionist, was a leading figure in the settler movement after the Six Day War, spearheading Jewish settlement in Hebron and playing a large role in Gush Emunim. Above, supporters carry Levinger away from the gates of Eyal prison following his release in 1990. He had been imprisoned for three months for killing an Arab shopkeeper in Hebron.

The year that I moved to Israel, 1972, was marked by a dramatic escalation in the viciousness of anti-Israel terrorism. In particular, the year saw two major incidents more deadly than any that had come before: a mass shooting in May at Israel’s international airport and the murder of Israel’s Olympic athletes in Munich in early September. I arrived in Israel less than three weeks after Munich.

One year after I settled in Jerusalem, the Yom Kippur War broke out. The war took a terrible toll on a generation of young men and on the national psyche. It was the deadliest war since 1948, and the first that Israelis felt they might lose. The Six Day War had left Israelis feeling invincible; the Yom Kippur War shattered that confidence.

The year that followed was a difficult and depressing time, especially for young single women. Nearly 3,000 men had been killed and thousands more injured. Most of the other men remained mobilized until the spring. Israelis were angry and disappointed — angry at the unexpected losses, and disappointed with the poor leadership shown by the long-ruling Labor Party. They were angry, too, at the cases of public corruption that suddenly seemed to be surfacing everywhere. Over the next four years the anger would build until it led in 1977 to the political upset known as “the earthquake.” For the first time in Israel’s history, going back to the pre-state era of the Jewish Agency and the early pioneers, the Labor Party was put out of power and a different ruling party emerged, Menachem Begin’s Likud. Begin, the perpetual outsider of Israeli politics, was elected prime minister.

The novelist Amos Oz warned us that as much as we disagreed with Begin, we would end up missing him one day. The political scene in Israel was destined only to go from bad to worse, he said.

In fact, the first years of the Begin era were an unusually happy and promising time. Israel won the Eurovision song contest — largely unknown in America but wildly popular here — not just once but two years in a row. The second winning entry was the upbeat and optimistic “Hallelujah.” Egyptian President Anwar Sadat’s historic 1977 visit to Jerusalem touched off a peace process that culminated in 1979 with the signing of a peace treaty between Israel and its most powerful Arab neighbor. In 1978, the politician and writer Yitzhak Navon was elected fifth president of the State of Israel, the first president with roots in the Sephardic Jewish community that was just beginning to assert itself on the national stage. Navon was the first president to move into his official residence with small children in tow, to Israel’s delight. The festivities surrounding his inauguration, featuring his popular young wife, Ophira, were capped by a musical rendition of a poem he had written, “May Great Peace Blossom in My Land.” A newsmagazine might have used the adjective “heady” to describe the atmosphere of those hopeful days.

But I was facing unanticipated dilemmas in my own entry to Israeli society. As a new immigrant and an observant Jew, I faced the unsettling polarization of the religious Zionist community, Israel’s equivalent of Modern Orthodoxy, into hostile right and left wings. The dividing line was the future of the territories that had been acquired/liberated/occupied (pick one, based on your political outlook) in 1967. Some of my colleagues saw this as a messianic opportunity to fulfill their maximalist Zionist dreams of possessing the Greater Land of Israel. In 1974, a new movement was founded, called Gush Emunim, “the Bloc of the Faithful.” The Gush was the initial kernel of the nascent movement for Jewish settlement in the West Bank — Judea and Samaria — and in Gaza. Almost immediately, those of us who opposed the settlement movement founded our own, much smaller group, which we called Oz V’Shalom, or Strength and Peace. We based ourselves on the verse from Psalms 29:11: “The Lord will give strength to His people; the Lord will bless His people with peace.” The secular peace movement, Shalom Achshav (Peace Now), didn’t get started until 1978.

We spent a major chunk of our time in the 1970s debating the meaning of Zionism in general and religious Zionism in particular, and the need for Israel to live at peace with her neighbors. Many of our discussions involved attitudes toward the Other in Judaism. It was still early for most of us to talk of a Palestinian state: We envisioned something closer to the territorial compromise suggested by then-foreign minister Yigal Allon. But we were deeply concerned for the future of Israel as a Jewish and democratic state, and we felt that widespread settlement of the territories would jeopardize that.

In the 1970s, it was still possible to believe that our views might come to dominate thinking in the Modern Orthodox community. We didn’t foresee the power with which the settler ideology would capture imaginations in the Orthodox world — nor the religious crisis that would ensue when territorial compromise became reality and settlements were dismantled. We didn’t foresee the alienation that would come to divide Orthodox and non-Orthodox Jews in the years ahead. There were inklings in the 1970s, but we were still confident.

Allon died suddenly in 1980. Sadat was assassinated in 1981. The first Lebanon War broke out in 1982. Our religious peace movement was always small, and never managed, somehow, to keep up with all the rapidly unfolding events. Still, in retrospect, we were right — almost prescient.

Debbie Weissman is a Jewish educator and interfaith activist, based in Jerusalem. She has lived in Israel since 1972 and has held a number of important positions. Among these have been director of a teacher training institute for Israeli high-school teachers; lecturer at the Hebrew University, primarily in the Melton Centre Library for Jewish Education and the School for Overseas Students, and an education officer in the Israel Defense Forces. She is currently co-chair of the Inter-religious Coordinating Council in Israel.

The 1970s: Judaism and the Territories