Before Independence: The Meaning of a Jewish State 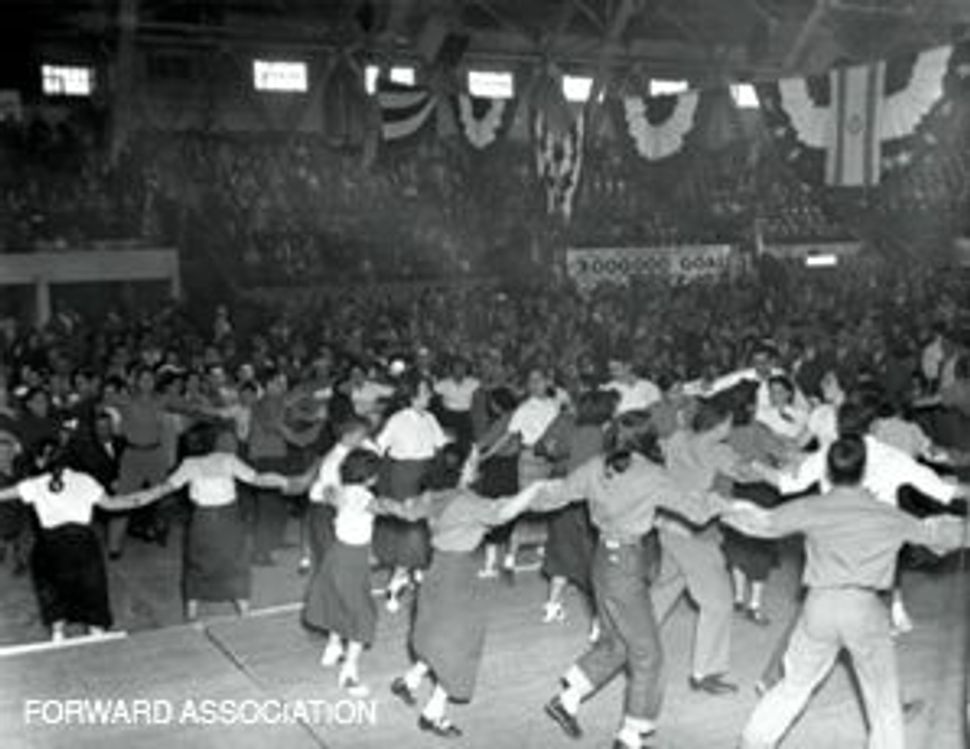 In America: Members of the Habonim labor Zionist youth group in Detroit dance the hora at a celebration of Israel?s third year of independence, in 1951.

What we knew about Israel back then, in the months before and in the months and early years after, was derived 10% or so from newsreels and 90% from Zionist youth movements, Hebrew schools, now and then a newspaper or a book. The world was different before television, and the first years of television were only a tiny foretaste of what television was to become, with its 24/7 coverage of just about everything. The world was different before the Internet, too. Today Israeli newspapers, frequently updated, are a mere key click away. Israel back then was mostly an imagining, and imagination offers more room for dreams, for milk and honey and utopian speculation or messianic conviction than does insistently graphic depiction. 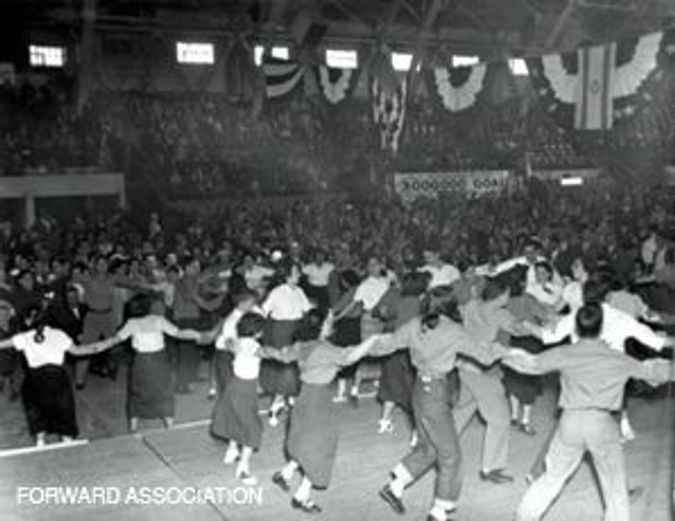 In America: Members of the Habonim labor Zionist youth group in Detroit dance the hora at a celebration of Israel?s third year of independence, in 1951.

On a cloudless Baltimore spring day in 1948, I walked with my father, a learned skeptic, and we spoke of the Jewish state that was then imminent. Just over four months earlier, the United Nations had voted in favor of partitioning Palestine, establishing a state for the Jews and a state for the Palestinians. We knew it would not be long at all before the Jewish state came into being. We spoke of the revival of the Hebrew language, a revival that was, in my father’s view, a mixed blessing, since the rise of Hebrew (good) meant also the decline of Yiddish (bad). (Fluent in both, Hebrew was for him an evocative language, Yiddish afforded him a worldview.) We spoke of the wonders of the kibbutz movement, Israel’s proud contribution to utopian realism.

And then, all of a sudden, my father turned to me and asked provocatively, “Do you think there will ever come a day when there will be an Arab prime minister of Israel?”

It was as if at that moment a dark cloud blocked the sun. The question was way too big for me to wrap my mind around. I knew, of course, there would be Arabs in the Jewish state, and it never occurred to me that the Jewish state would be anything other than democratic, and if I believed, as surely I did, that a (then) Negro had every right to be elected president of the United States, why shouldn’t an Israeli Arab be able to become prime minister of Israel?

To which the obvious response was, Israel is a Jewish state — actually, the Jewish state. But that is a response, not an answer.

As to my father’s question, it revealed his skepticism toward nationalism, his fear that Jews would make no better a job of the nation-state than so many others had managed. And as to the cloud that blocked the sun, it lingers still, formed as a question mark regarding Israel’s capacity to handle the ongoing tension between being simultaneously Jewish and democratic. An Arab prime minister, exceedingly unlikely — but why has that turned out to mean also dramatically lower per capita investment in the Arab sector (20% of Israel’s population) than in the Jewish sector?

That question, and others like it, mostly tracing back to my father’s unsettling question of 60 years ago, have long since displaced the imagined answers of an earlier time.

In that earlier time, we sang, “We have come to the land to build it and be rebuilt by it,” or, “We have planted but we have not yet harvested,” or, “How beautiful are the nights in Canaan.” The songs were anthems, they were prayers, they were pledges.

So it was one night in 1953 that my friends and I stayed up all night on the deck of the Artza — a 3,000 (or so) ton immigrant ship, now more or less converted into an ocean-liner — steaming into the dawn and waiting to glimpse the first lights of Haifa. We knew the map, the shape of the coastline, knew that Haifa was Israel’s workers’ city, just as Tel Aviv was its commercial hub and Jerusalem its academic center and heart. We knew the rudiments of the language, we knew the demography, the history, the geography, the competing ideologies, all the abstractions. But we didn’t know the look of trachoma, we didn’t know the smell of oranges or the taste of falafel, the feel of the waterfall at Ein Gedi after hiking through desert, the sounds of the bus station vendors selling newspapers or peanuts, the sight of Jewish beggars, the thrill of the sudden shift to cooler air on the road up to Jerusalem, the rich blueness of the Mediterranean. Above all, we did not know what lay in store for this so-long awaited yet still so fledgling an enterprise, this Jewish state, the promise fulfilled and now itself home to new and often extravagant promises. We did not know the tumbling dissonance of promises met and exceeded alongside promises neglected, broken, discarded. We did not know, refused to know, the depth of the enmity, so we did not foresee the widows and orphans traumatized by war, or what it would cost and what it would mean to keep a society ever-mobilized. We did not know that the swords would morph not into plowshares but into tanks, the spears not into pruning-hooks but lethal drones.

There has been and still is so much learning to do. It is no longer (if ever it was) simple, straightforward. It is no longer an imagining; it is a mixed multitude of realities, of satisfactions and disappointments, of heroes and knaves. It is an ongoing collision between our remembered yesterdays and the remembered tomorrow for so long promised.

When a kibbutz called Geva celebrated its 60th anniversary in 1982, its popular choir — later a recipient of the Israel Prize — featured a song written for the occasion, called “Sixty Years Old.” The chorus goes, “Ki amitit hi v’lo semel v’lo degel v’lo ot; he’avar me’achoreha — hi tzovah el haba’ot”— “She is authentic, not a symbol and not a flag and not a sign. The past is behind her — she craves what’s yet to come.”

That song has now been adopted as a signature for Israel’s 60th. It’s not given to us to know what’s yet to come — nor, for that matter, is yesterday quite over, not in a place that is so heavy with millennia past, not in a nation-state that carries a history so rich, so frenetic, so emphatic. All we can know is what we must do.

Leonard Fein, a Forward opinion columnist, is the author of “Politics in Israel” (Little Brown, 1965).

Before Independence: The Meaning of a Jewish State