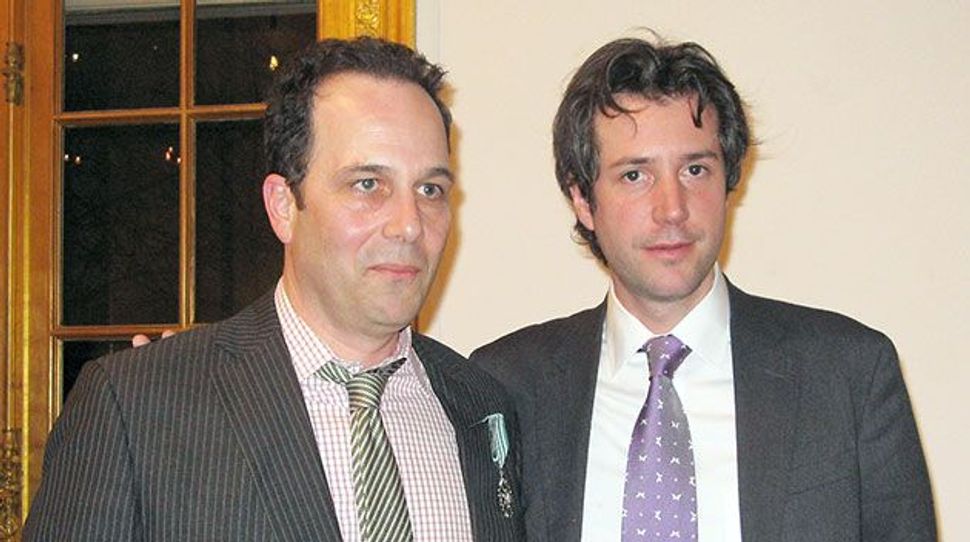 “You are a man of books and stories,” said Antonin Baudry, cultural counselor of the French Embassy in New York, as he introduced Philip Gourevitch, recipient of France’s Order of Arts and Letters, at the January 31 ceremony held at the Cultural Services of the French Embassy. “You are a voice not only for France, but Europe… a correspondent in Asia, Europe, Africa, Siberia, Cambodia… the Iraqi War…. You first worked for the Forward, before working as a freelance writer.” Gourevitch, author of the award-winning book “We Wish To Inform You That Tomorrow We Will Be Killed With Our Families: Stories From Rwanda (Farrar, Straus and Giroux, 1998), responded: “I’m bewildered. My connection with France is personal…. It is my father who should be receiving this medal…. My mother [Jacqueline Gourevitch] was born in France. My father [Victor Gourevitch] came to France [from Belgium] in the early 1940s.”

Gurevitch continued: “I grew up in a home where [there was] the best of French writing, literature, film… [André] Gide, [Albert] Camus, and [André] Malraux… inspired me to be a writer.” Among the guests were Kati Marton, Salman Rushdie and Forward founder Seth Lipsky.

Gourevitch is the former editor of The Paris Review and a staff writer for the New Yorker. His book about Rwanda — along with others, including “A Cold Case” (Farrar, Straus and Giroux, 2001) and, with Erroll Morris, “Standard Operating Procedure: Inside Abu Ghraib” (Penguin Press, 2008), — has been translated into a dozen languages. Baudry described Gourevitch as “a merciless speaker whose comments about war always struck me.” Then he quoted the honoree: “People who win wars always know what they are fighting for. And people who lose wars generally only know what they are fighting against.”

Presenting the medal to Gourevitch, Baudry stated: “France is a country of diversity that knows how to recognize the quality of different standpoints, even those it doesn’t always agree with. People and countries can be defined by the people they honor and by their friends. Tonight we have chosen a very good friend… very demanding, very intelligent, as we wish our friends to be.”

The Order of Arts and Letters was created in 1957 to recognize eminent artists and writers, as well as individuals who have contributed to making French culture known throughout the world.

I am delighted to inform that “Rabbit a la Berlin,” a 2009 film in German and Polish with English subtitles, is now geared for national distribution. A 2010 Academy Award nominee for best short documentary, “Rabbit” is about the situation that once existed in Berlin along the 120-mile walls that separated East and West Berlin. A population of well-fed, content rabbits lived between the walls, and it was verboten to shoot at them. Humans, however, were shot if they tried to escape to West Berlin. A no-stress Socialist paradise for the floppy-eared hoppers, they became a “must see” tourist attraction for such visitors as Fidel Castro, Nikita Khrushchev, Willy Brandt and Yasser Arafat. German shepherd dogs protected the rabbits’ security until the fecund generations over-bred and the thousands of younger bunnies lost all sense of fear, having no memory of any other existence. Running out of space and food, the “socialist” rabbits began to burrow under the wall to the “capitalist” West. Like their human counterparts, some were shot, food was poisoned and the once placid, well-fed hoppers were transformed into anxiety-ridden fugitives.

‘Loss,’ A 30-Minute Short Lamenting the Absence of Jews In Germany

Shown along with “Rabbit” is “Loss,” a 30-minute film by **Nurith Aviv ** that had a brief run at New York City’s Film Forum this past December. In the preface, Hannah Arendt, in a clip from a 1984 interview, stares into the camera and declares: “The intellectuals abandoned us.”

In a series of monologue interviews during a 30-minute train ride to Berlin, Germans reflect on the absence of Jews from Germany.

Gustav Obermair, professor of theoretical physics at the University of Regensburg, muses about the expulsion of Jewish physicists from Göttingen University. “This ended physics at the school,” said Obermair, who defines “quantum theory” as “a melding of Prussian thoroughness and Jewish unorthodox thinking” with which he credits Einstein. As an afterthought, he adds, “In 1933, half of Germany’s Nobel Prizes were won by Jews.”

Claus-Dieter Rath, a psychoanalyst, laments: “The first postwar generation lacked role models. The fathers were not there. There were no men….”

Not until he came to the United Sates did Rath meet Jewish researchers and scientists. He seemed surprised that they accepted him. He noted: “You hear of Germans dreaming of having had Jewish ancestors, a time when the world was orderly and everyone had his place…. There are people [who invent] “Jewish aunts, biographies,” to exculpate themselves, as if they were on the side of the victims. “What is missing,” he said, “is the Jewish experience in Germany.”

The final interviewee, Hanns Zischler, informs that in Bavaria he did not know that there had ever been a Jewish culture in Germany. Only after he went to Berlin did he discover this culture to be “a viable essence.”