Having a (Purim) Ball 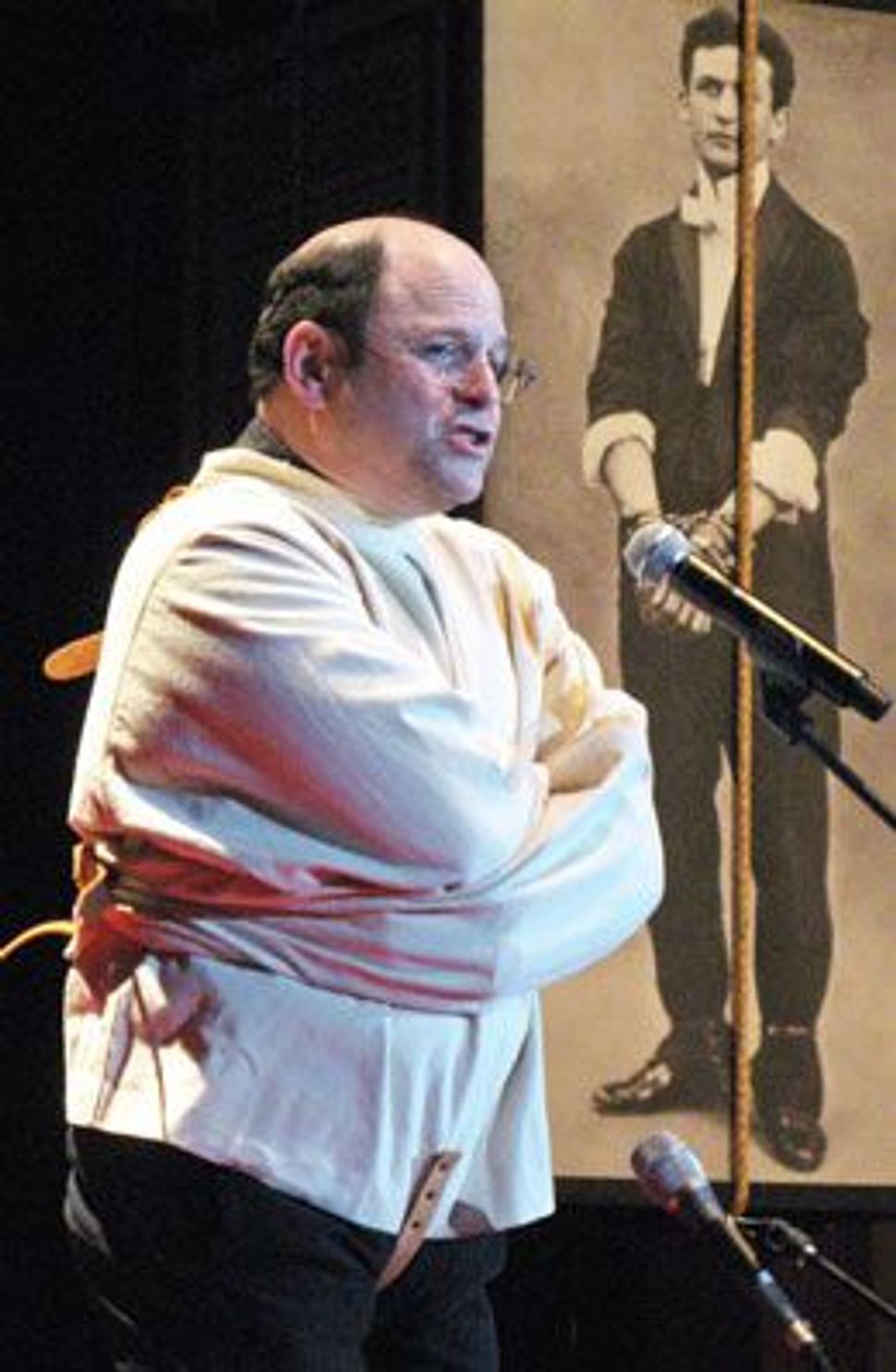 It was raves and roasts at the February 28 Museum of the Moving Image’s salute to Alec Baldwin”, held at Cipriani 42nd Street. It was also an adieu for the museum’s founding director, Rochelle Slovin, who has led the institution for the past 30 years. Slovin declared: “People said they did not need a museum of movies and TV and [that] Astoria was not the place…. It is now the most important institution of its kind in the world! ” There were clips from a dozen Baldwin films, including “Beetlejuice” (1988), “It’s Complicated” (2009), “Glengarry Glen Ross “(1992) and “The Hunt for the Red October” (1990), with each clip prefaced with a tribute by a fellow actor. “Peeing next to you was one of the highlights of my career,” said Ben Stiller, a 2008 museum honoree, as an onscreen clip came on from “Along Came Polly” (2004) showing the two actors side by side at a urinal, discussing business. “Not since Archie Bunker have my parents seen a character they agreed with,” said “Saturday Night Live” alum Tina Fey, currently starring with Baldwin in the NBC-TV series “30 Rock.” Introduced by SNL executive producer Lorne Michaels as “a liberal who looks good in a suit, “ a somber Baldwin said, “We need arts funding in America.” Lightening up, he joshed: “‘30 Rock’ is the most fun I ever had. Who would have thought that playing [Jack Donaghy] a Machiavellian… Republican, would be the highlight of my life.” 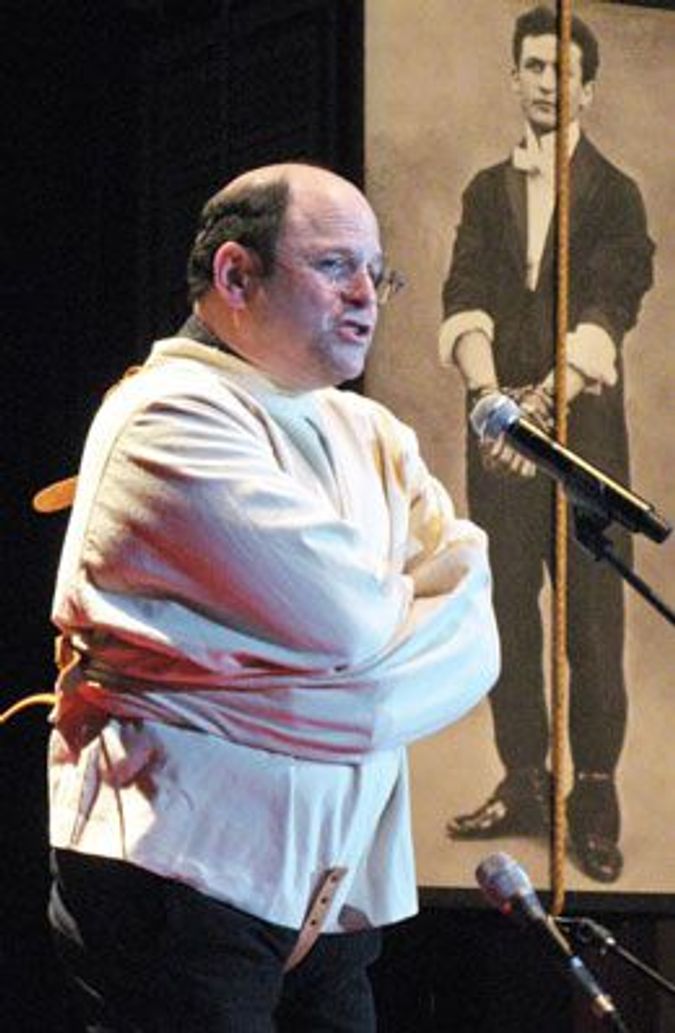 The 500 guests who helped raise $1.3 million for the museum then witnessed a most unorthodox Purim shpiel, performed by actor, writer and director Jason Alexander (aka George Costanza of “Seinfeld”). Alexander declared: “There is no association between Purim and Houdini. Purim celebrates a miracle, and I will perform a miracle.” As three volunteers from the audience buckled him up, Alexander proclaimed, “I will recite the Purim shpiel while attempting to escape from this 100% canvas-and-leather straightjacket!”

Alexander began his attempt to extricate himself. Incongruously he declared, “The Waldorf-Astoria has a policy of not hanging Jews from the ceiling.” While twisting, kvetching, Alexander, seemingly in distress, recounted the 2,400-year-old tale of Ahtzuris (Alexander’s articulation of King Ahasuerus); Ahtzuris’s problems with his wife, Vashti; the arrogance of Mordechai, who would not bow down to Haman but saved Ahtzuris’s life, and Esther saving her people. As the audience watched in amazement, Alexander — red-faced and panting — wiggled free! “With cunning and food, the Jews can get out of anything,” the Houdini impersonator said. “Tonight, the spirit of Esther, Houdini and Johnny Walker Red enabled me to escape.” Among those relishing the magic of the evening were Ambassador Howard Rubenstein, chairman of Rubenstein Communications, and his wife, **Amy.

During my chat with Alexander, I said, “Yesterday I told Richard Gere, ‘I’ll be seeing your attorney’ tomorrow night,’” a reference to Alexander’s role as Gere’s legal adviser in “Pretty Woman.” I told Alexander that Gere graciously sent him warm regards. Without missing a beat, and with his signature squinting smile fully operative, Alexander told me, “When you see him, tell him, ‘The bill’s in the mail!’”

“The Human Resources Manager”: An Israeli Film About a Man Who Discovers His Humanity

Israel’s Academy Award submission, “The Human Resources Manager,” which opened on March 4, is about the transformation of a frozen soul. Directed by** Eran Riklis**, this dark film offers moments of exquisite sensitivity. Mark Ivanir portrays a manager in Jerusalem’s largest bakery who discovers that one of his employees — Yulia, an illegal worker from Romania — was killed in a suicide bombing. He has to deal not only with the legal implications of an undocumented worker, but also with his own disintegrating marriage. He is assigned to accompany the body to Yulia’s hometown in Romania. This is not the land immortalized by Aaron Lebedeff’s Yiddish song “Rumania! Rumania!” a “sweet, beautiful land.” Like the landscape, the people are in a state of emotional permafrost, one in which bribes trump law. With characters identified as only “son” (Noah Silver) and “widow” (Israeli films’ diva Gila Almagor), it is human resources manager Ivanir who carries the film and finally touches the heart with his transformation.

During my chat with Ivanir before the film’s New York opening, he told me, “My grandfather, Meshulam Surkis, wrote for the Forward from Paris in the 1970s.” “You were in ‘Schindler’s List’?” I asked. “I played the kapo Marcel Goldberg, the one in charge of the list…. I was born in Czernowitz.” I interrupted: “That’s where the 1928 conference establishing Yiddish as a legitimate language was held!” Ivanir replied, “My grandfather was one of its organizers.” When asked about his role as an HR manager, he responded: “ None of us were sure about the emotional cost of the journey…. Someone who is stuck in life… he’s not sure where life is going… a state of emotional death. [But] through the death of the woman, he discovers his own humanity.” It’s a movie well worth seeing.

Having a (Purim) Ball