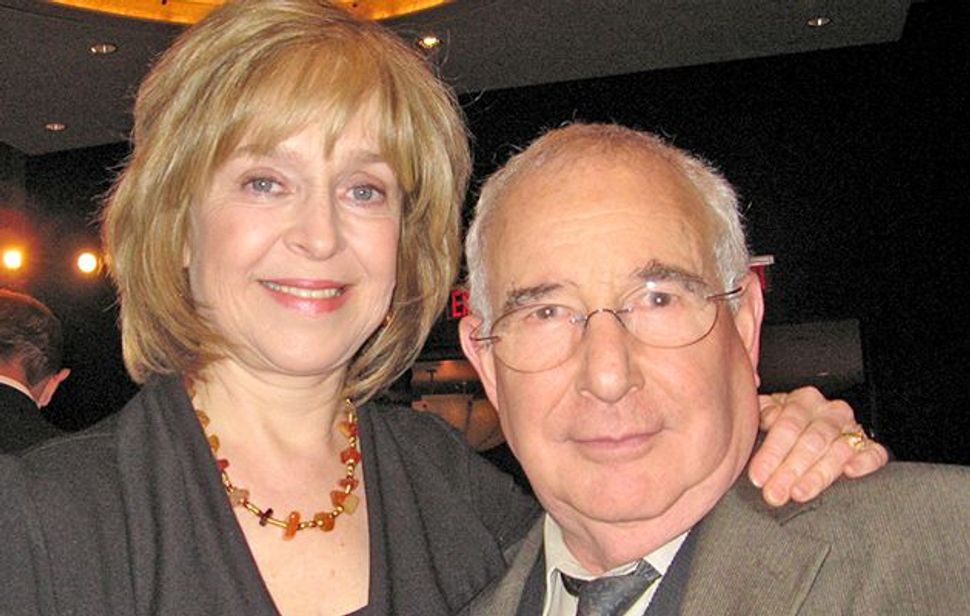 What a Pair: Jill Eikenberry and Michael Tucker. Image by Karen Leon

“A good newspaper.. .is a nation talking to itself,” said Jane Eisner, editor of the Forward, quoting playwright Arthur Miller at the Forward Association’s March 8 “Looking Forward” fundraising gala, held at Mandarin Oriental.

With the assurance of one versed in psychological lore, Sheffer helped readers, calming their angst and giving them hope. In one case, he assured a young man that he can safely marry a woman who has a dimple and that the belief that men who marry women with dimples die within the year is nothing more than a bubbe-mayse, an old wives’ tale. The man can rest easy and marry his dimpled sweetheart.

“The Forward is a newspaper that helps readers make sense of their world, whether in the 19th and 20th centuries or now, in the 21st”. Eisner said. She explained that it “examines the cutting-edge of our culture. It means a special kind of watchdog journalism, holding our government and our communal leadership accountable. It means publishing original poetry and prose and satire… with Jewish sensibility…. It means airing certain truths that no one else has the chutzpah to publish. And it means telling the Jewish story better than anyone else.”

She told the audience that each week, in print, the Forward “reaches about 70,000 readers in the United States and 35,000 in Israel.”

“Once we spoke to our readers only in Yiddish. Then we added English. Now we are also speaking a new language,” Eisner said, referring to what Sheffer had dubbed earlier in the evening as “digitalish.” Eisner continued, “In the last year alone, the number of page views each month has increased by two-thirds, now up to nearly 1 million clicks”

Acknowledging the Yiddish Forverts’s editor, Boris Sandler; the paper’s associate editor, Itzik Gottesman, and other dignitaries in the room, Samuel Norich, executive director of the Forward Association, launched his address with the oft-used Yiddish speaker’s preamble: “Eyder ikh heyb on tsu redn, vil ikh zogn a por verter.” (“Before I begin speaking, I’d like to say a couple of words.”)

Norich thanked the donors and Forward subscribers who contributed to the success of the evening, which raised $330,000. He also noted that the Forward has won a first-place “Webby Award… beating out The New York Times, The Wall Street Journal, Variety and Christian Science Monitor.”

“The National Committee on American Foreign Policy is a policy-oriented nonprofit think tank dedicated to the resolution of conflicts that threaten U.S. national security interests,” said George Schwab, committee co-founder and president, at the March 2 gala dinner honoring New York City Police Commissioner Raymond Kelly and Paul E. Jacobs, who is chairman of the board and CEO at the mobile communications supplier Qualcomm. Welcoming remarks were by committee chairman William Flynn, whom Schwab credited with playing “a definitive role in the resolution of the conflict of Northern Ireland, [helping] bring stability in Taiwan Strait and [helping move] Central Asia to the front-burner of U.S. foreign policy concerns.” The awards were presented by American career diplomat John Negroponte and Paul Volcker. Two years ago, Volcker was appointed by President Obama to head his Economic Recovery Advisory Board, where he remained until this past January. Unable to attend in person, United States Army general David Petraeus sent videotaped congratulations to the honorees.

Kelly, recipient of the George F. Kennan Award for distinguished public service, was lauded for the extraordinary and comprehensive anti-terrorist system he had instituted for New York City, as well for as the NYPD’s interaction with their counterparts abroad. Recipient of the Global Business Leadership Award, Jacobs, owner of 35 patents in the area of wireless technology, described his rise at Qualcomm and the company’s innovations. He informed that though 90% of the company’s profits were earned abroad, “75% of our work force is based in the U.S.” Held at The Plaza, the dinner was hosted by ABC News contributor John Berman. Among the guests were Kenneth Bialkin, Barbaralee Diamonstein-Spielvogel and Diamonstein’s husband, former American ambassador to the Slovak Republic, Carl Spielvogel.

Schwab, a Holocaust survivor from Latvia, a former president of Jewish Survivors of Latvia — USA, in 2002 received Latvia’s highest honor, the Order of the Three Stars. In 1998 he was awarded the Ellis Island Medal of Honor.

“I hope that children will make the future beautiful,” said Dr. Freya Schnabel, an honoree at the March 3 American Cancer Society Mothers of the Year Luncheon, held at The Plaza. “What my daughters did for me [was] give my life meaning,” said Schnabel, director of breast surgery and a professor of surgery at New York University’s Langone Medical Center. She recalled how she told her daughter, who was invited by her teacher to speak to her eighth-grade classmates: “When you go out into the world, [be] a credit to your families, yourself, and add value to the world.” Also honored was Muffie Potter Aston, whose advocacy and campaign for cancer causes dovetails with a roster of affiliations ranging from being a board member of the Society of Memorial Sloan-Kettering Cancer Center to a board trustee for the American Ballet Theatre.

Her husband and award presenter, plastic surgeon Sherrell Aston, detailed his wife’s journey to motherhood. “I met Muffie in 1994 on a blind date. We went to a Barbra Streisand concert at Madison Square Garden. This was the lady I wanted to spend the rest of my life with. After the fourth date, Muffie said: ‘Hold on! I want to have children! I intend to be a mother…. No point in dating’…. We were married 18 months later. It took 12 pregnancies — one as long as six months — before the twins [Ashleigh ** and **Bracie] were born…. A hands-on mother for the past six years, she never let the girls cry themselves to sleep. For four years, she was absent from the social scene.” Muffie Potter Aston responded: “Motherhood was a hard-fought battle…. I never heard a parent say, ‘Darn, my kids grew up so slowly!”

Diana Feldman, volunteer chairman of the American Cancer Society’s, special events committee, thanked the honorees and the nearly 300 women — and men — in the room. “We hope we can continue to count on you to help… so that one day, cancer can no longer strike fear in our hearts.” The event’s co-chairmen were Grace Hightower De Niro, Patti Hansen, Somers Farkas, Daphna Keitel, Alexandra Lebenthal, Cynthia Lufkin, Georgette Mosbacher, Allison Stern and Adrienne Vittadini. Founded in 1913, the American Cancer Society has offices in 3,400 communities, involving millions of volunteers across the United States.