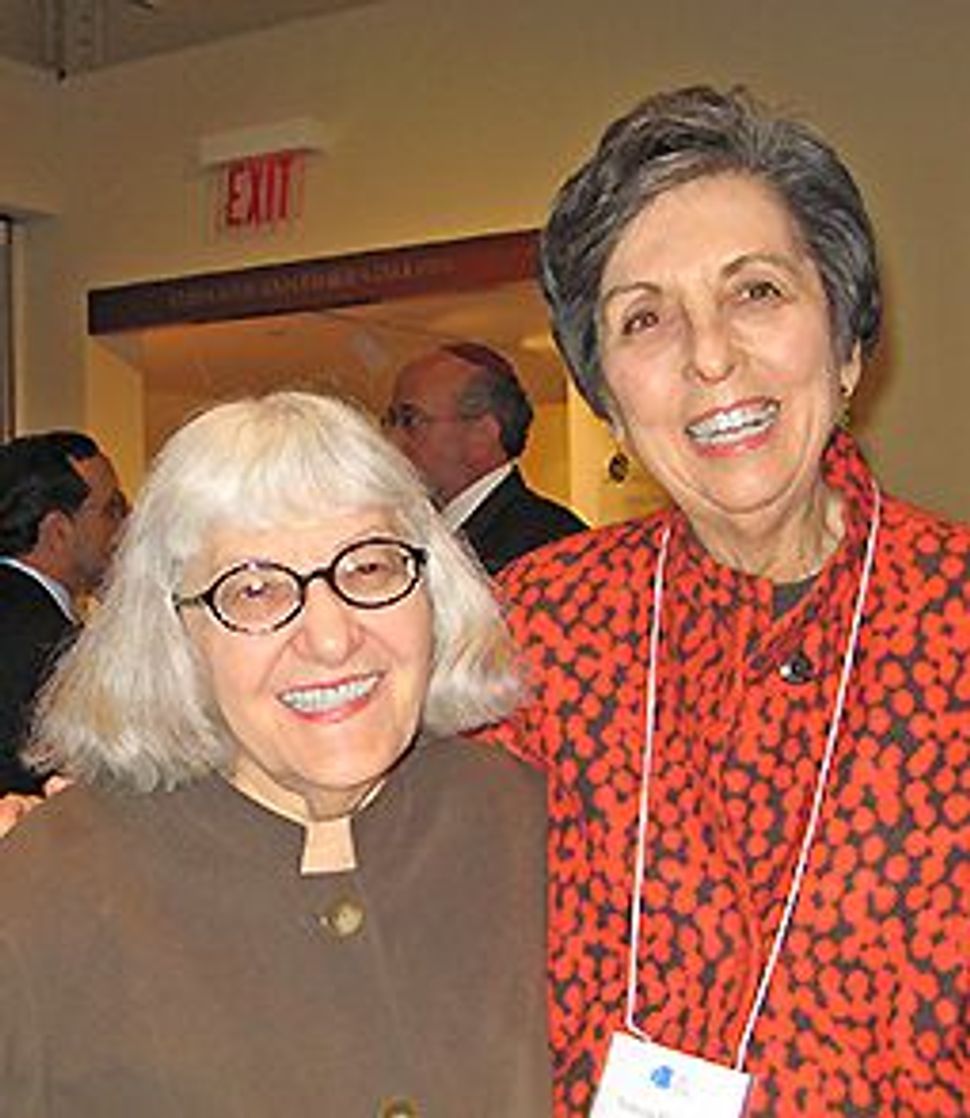 “To speak of Cynthia Ozick is to speak of magical storytelling,” said Francine Klagsbrun, a board member of the Jewish Book Council, before presenting Ozick with the council’s lifetime achievement award at its 60th annual National Jewish Book Award ceremony, held March 9 at the Center for Jewish History. Ozick’s response was a literary dissertation leading off with: “Lionel Trilling, one of the most influential literary critics of the century… and the first Jew to have been officially appointed professor of English at Columbia University, is remembered in particular for two Jewishly oriented statements, one more shocking than the other: ‘Being a Jew’ he wrote, ‘is like walking in the wind or swimming: You are touched at all points and conscious everywhere.’… There is nothing in it of Jewish civilization or culture or history or heritage or even bookishness,” Ozick said. Quoting Trilling, she went on: “’I know of no writer in English who has added a micro-millimeter to his stature by ‘realizing his Jewishness,’ although I know of some who have curtailed their stature by trying to heighten their Jewish consciousness.” Ozick noted that the phrase “realizing his Jewishness” appeared in quotes “to let us know it is meant to be spoken in derision.” She was adamant: “This deeply vulnerable remark — we might even call it cowardly — is not especially surprising from a man who had to fight to be admitted to a university English department at a time when Jews were told they would not fit in.” She gave high marks to Saul Bellow, who “unlike Trilling, was fearless… refused to be refused, and in announcing that the legacy of Western history was also the Jewish legacy… aspired to the acme of literary power and himself joined that dazzling company of great masters.” 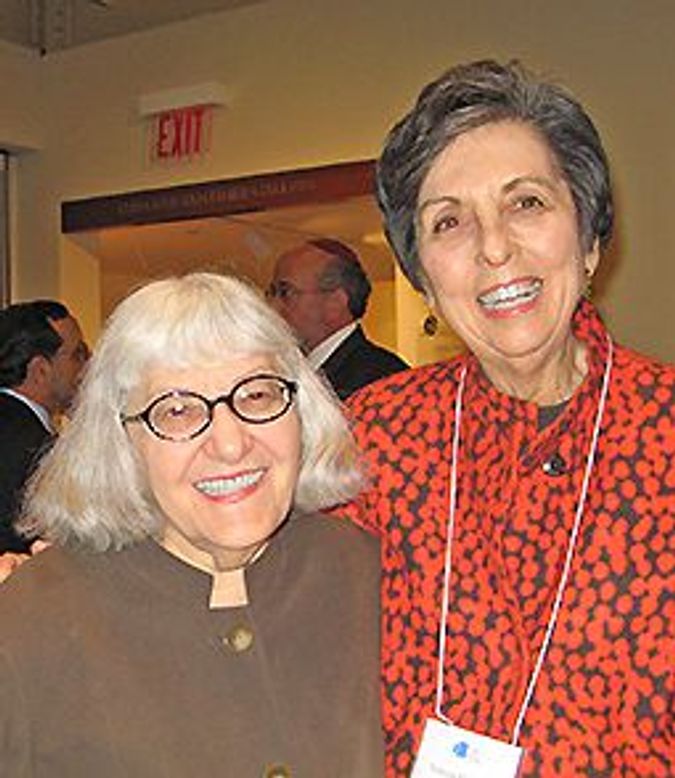 Hosted by Alana Newhouse, editor-in-chief of Tablet magazine, and Columbia University journalism professor Ari Goldman, a former New York Times reporter, the evening featured the presentation of 19 awards, including the JJ Greenberg Memorial Award for Fiction to David Grossman for “To the End of the Land” (Knopf, 2010). Grossman expressed a “deep anxiety… Israel may not be able to survive all it faces,” adding, “We lost our son Uri during the last days of the war in Lebanon.” The recipient of the council’s Impact Award was Harold Grinspoon, who, it was noted at the event, established with Diane Troderman the Harold Grinspoon Foundation in 1993 “to promote Jewish life among young people, adults and families in Western Massachusetts, North America and Israel.” The event journal noted, “Since its founding, HGF has dispensed over $100 million to the Jewish world in programs, grants and operations.” The Everett Family Foundation Jewish Book of the Year Award was presented to the Forward’s Gal Beckerman for “When They Come for Us, We’ll Be Gone” (Houghton Mifflin Harcourt, 2010).

“When you lose a patient, he may die. When you lose a client, I get letters for 25 years,” joshed, criminal defense lawyer Benjamin Brafman, host of the March 10 Israel Cancer Research Fund 2011 Tower of Hope Gala, held at the Mandarin Oriental. “Every year, I agree to do this dinner six months in advance. Then something catapults me onto the front page…. [New York] State Senator Carl Kruger was arrested and indicted… you’ll read about it in tomorrow’s papers.” Beacon of Hope Award recipient Andrew Faas led off with, “Were it not for an Israel scientist funded by the ICRF, I would be dead today.” An honorary member of Toronto’s ICRF board of Trustees, Faas informed: “Six years ago I was diagnosed with leukemia. Thanks to the miracle drug Gleevec, what was a fatal condition is now a chronic one. Today I live a full life without limitations other than no grapefruit — which is no hardship, since I don’t like the fruit. Four years ago I met Dr. Eli Canaani, supported by ICRF at the Weizmann Institute of Science…. After 20 years of research and 26 years of saving peoples’ lives, I was the first person Dr. Cananni met who is on the drug! [It was] an incredible moment for both of us.”

“My relationship to the art world is quizzical at best and tenuous at worst,” author, designer and illustrator Maira Kalman said at the March 8 preview reception of “Maira Kalman: Various illuminations (of a Crazy World)” at the Jewish Museum. On display were a jar of buttons, three ladders, five metal buckets and a can of mushy peas. “These are the things that inspire me,” she said. The exhibit includes illustrations from her children’s books, a painting titled “Ruth Bader Ginsburg” (2000) showing a cropped image of a Supreme Court justice’s black robe on a hanger, and pieces titled “Herring and Philosophy Club” (2006) and “Pickle Tag” (2010) “What’s with the herring?” I asked Kalman. “My mother loved herring…. [and] we made our own pickles,” replied Kalman, whose family roots, she told me, include the towns of Valozhyn and Lenin, not far from Russia’s border. In her address, in the ballroom, museum director ex officio Joan Rosenbaum told the crowd, “Her work has a profound sense of joy and a unique sense of humor.” Amid the crush was fashion guru Isaac Mizrahi. “We’ve been friends for years, since the early ‘90s.” he said of his relationship with Kalman.

”Winter In Wartime”: A Teenage Hero Takes on the Nazis

There is a fleeting moment in Martin Koolhoven’s film “Winter in Wartime” in which a little dark-haired girl building a snowman is told “Sarah! Come in!” by an unseen woman. A man rushes out of the house and demolishes the snowman. If your Holocaust sensors are operative, you grasp that Sarah is a hidden Jewish child. This is an example of the texture of life in 1945 in occupied Holland. “Wartime” stars Martijn Lakemeier as 13-year-old Michiel, a one-man secret Resistance operator in a small Dutch town of which his father, Johan Van Beusekom (Raymond Thiry), is the mayor who maintains a neutral relationship with the Nazis. Michiel secretly aids a downed British pilot hidden in a nearby forest. Sensitively directed and beautifully photographed in The Netherlands, this film, with Michiel’s smarts and his father’s redemptive act, is not to be missed. My sense that the forest scenes were not shot in Holland was validated when I read in the press notes that these were “shot in eastern Lithuania at the Russian border” because, as Koolhoven said in an interview, “it looked like Holland.” For me the forest was akin to one my mother and I fled through in the winter in 1940 from Soviet-occupied Poland en route to Lithuania.

The film is currently playing at the Lincoln Cinemas and the Quad Cinema.