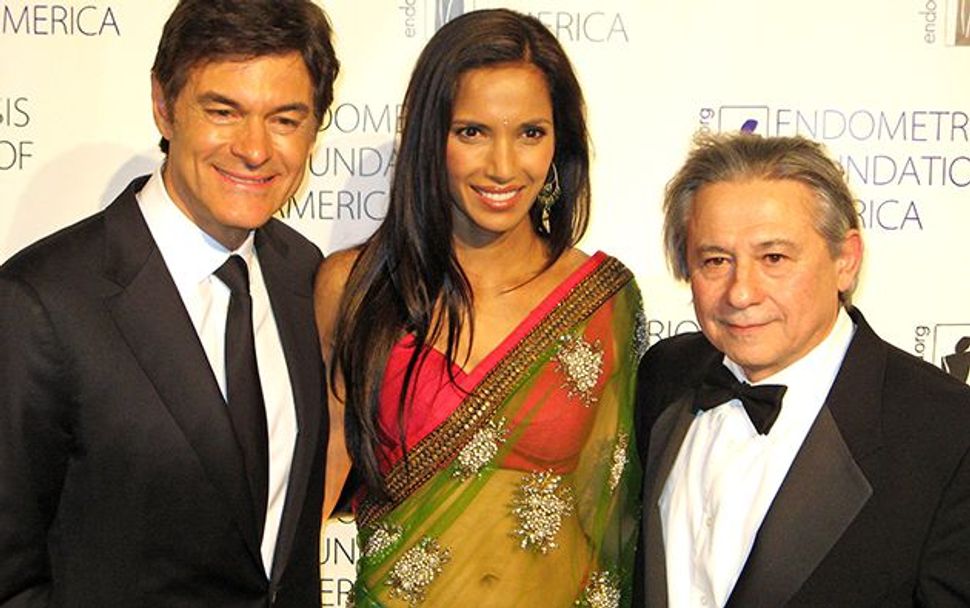 ?I won?t bore you with tales of my genitalia,? said Padma Lakshmi, co-founder with Dr. Tamer Seckin of the Endometriosis Foundation of America, at the foundation?s third annual Blossom Ball, held March 18 at the New York Public Library. Lakshmi, a model, actress, award-wining author and Emmy-winning host of Bravo?s ?Top Chef,? credited ?advanced gynecological surgeon? Seckin for having ?changed my life. He made me healthy and able to have my daughter, Krishna.? Another guest that night Dr. Mehmet Oz, host of ?The Dr. Oz Show.?

Lakshmi told the nearly 400 guests: ?Ten million adolescents and women in America needlessly suffer pain, infertility?. I don?t want another woman to go through what I did.? Actress Susan Sarandon, who co-chaired the event with art historian and chairman of the board of the New York Academy of Art Eileen Guggenheim and the editor-in-chief of Glamour magazine, Cindi Leive, described her own tortured struggle with endometriosis. ?In college? I used to faint?. My story ended happily. I don?t know how I managed to have three children.?

According to the program notes, and as articulated from the podium that evening, ?endometriosis, which affects nearly 180 million women and adolescents globally ? more than Alzheimer?s and Crohn?s disease combined ? is a leading cause of infertility and pelvic pain.? In their joint welcome journal address, Ms. Lakshmi and Dr. Seckin stated: ?Endometriosis remains a mystery; often dubbed as ?psychosomatic?? fraught with missed diagnoses? and needless hysterectomies? the average woman will go nearly a decade [and] see as many as five physicians before her pain is taken seriously.?

?My love for Israel [is like] my love for my children? they are our tomorrows and our children?s children?s tomorrows,? Elizabeth Taylor said to the awestruck guests at the Emunah Women of America?s September 1981 Award dinner at Manhattan?s Milford Plaza. That night, Taylor ? who died March 23 at 79, of heart failure ? was breathtaking in a flowing red chiffon gown, a double string of pearls and blinding diamond earrings. Surrounded by 6-foot-plus bodyguards and with husband No. 6, Virginia Senator John Warner, in tow, she made her entrance into the ballroom through swinging kitchen doors. It was bedlam! As the awestruck women rushed to greet her, so intense was the crush that a shaytl, a wig, catapulted off a guest?s head, landing atop a food platter! Regal, gracious, Taylor mounted the stage to accept the organization?s first-ever Freedom Award from Emunah?s then president, Shirley Billet. Taylor, who following her 1960 conversion to Judaism purchased $100,000 worth of Israel Bonds, made donations to Israeli war victim funds and raised millions for Israel through personal appearances, ended her remarks with ?Hazak v?amatz?, strength and endurance. She was cheered!

In 1942, in Outremont, Montreal, I saw a small ad in Modern Screen ? one of a dozen movie magazines I devoured weekly in a local candy store. MGM was looking for a 12- to 14-year-old girl who ?could speak English with a British accent and could ride a horse.? Newly arrived in Canada from Japan, not yet 12, my English problematic and never having been astride a horse, I answered the ad. When Taylor won the part of Velvet Brown in MGM?s 1944 film ?National Velvet,? I sent her a congratulatory letter. From Culver City, Calif., came Taylor?s handwritten ?thank you? note, with an autographed photo (which I still have). In 1946 I bought her book ?Nibbles,? about her pet chipmunk, which I sent to her at MGM Studios to be autographed. I never got the book back. That night, when I told Taylor about the ?Velvet? and ?Nibbles? stories, she threw back her head and roared with laughter! Warner interrupted: ?Sorry, we have another engagement.? Taylor, then appearing in Lillian Hellman?s ?Little Foxes? at the Martin Beck Theater with co-star Maureen Stapleton at her side, was hustled out the kitchen doors. Suddenly the room?s lights seemed dimmer. Founded in Israel (then Palestine) in 1935, Emunah is Israel?s largest women?s religious Zionist organization. Its American division was established in 1977.

On March 16 at the French Consulate, Consul General Philippe Lalliot paid tribute to Helene Berr, a graduate of the Sorbonne who, from April 1942 to February 1944, kept a remarkable diary about life in occupied Paris. It was published in English as ?The Journal of Hélène Berr? (Weinstein Books, 2008). Arrested in March 1944, she was sent to Auschwitz with her family. The all-in-French evening followed the exhibition ?Helene Berr, a Stolen Life? curated by the Mémorial de la Shoah, in France. It had been on display at the United Nations headquarters from January 25 to March 13. Present were Mariette Job, who is Berr?s niece; Rabbi Levy Djian, founder of the online entity Torah on Demand, and Menachem Rosensaft, president of the Federation of Survivors of Bergen-Belsen. In French, Rosensaft said: ?It was possible that Helene and my mother saw each other in Auschwitz? even interacted with each other, since my mother spoke French fluently?. On October 31, 1944 Helene was transported from Auschwitz?to Bergen-Belsen in Germany. Two weeks later the notorious SS Dr. Josef Mengele assigned my mother and eight other Jewish women as a medical team to be sent to Bergen-Belsen.?

The evening?s star attraction was Guila Kessous, a French-Jewish professor at Boston University who was a student of Elie Wiesel. Kessous, who is also an actress, director and producer, channeled Berr for almost an hour in an adaptation of Berr?s diary, by playwright Pierre Tre-Hardy. ?About the Shoah, I have been Elie Wiesel?s student for six years during my Ph.D.,? Kessous later told me. A professor with ?a degree from the French government and a doctorate in ethics and aesthetics,? and a researcher at Harvard University?s Center for Jewish Studies, the beautiful 28-year-old Kessous has produced and directed the world premiere of Wiesel?s ?Il Était un Fois? (?Once Upon a Time?), which she translated into English and which was performed both in Boston and at France?s Avignon Theater Festival, with actors from the Comédie-Française. ?I am about to publish a book in France about [Wiesel?s] theater works? and was also the only director to have been permitted to stage [Wiesel?s] three plays: ?The Trial of God,? ?Once Upon a Time? and ?Zalmen, or the Madness of God.??