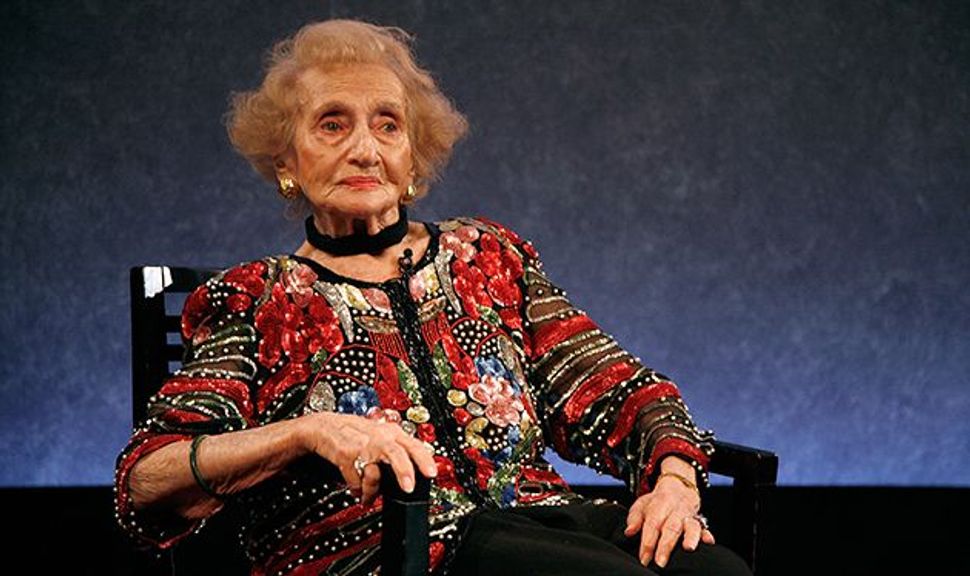 In one of the early frames of an upcoming documentary that soon will be shown in New York — “The Rescuers: Heroes of the Holocaust,” by African-American filmmaker Michael King and featuring British historian Martin Gilbert as narrator — Britain’s Prince Charles is seen addressing the Kindertransport Association. This takes place November 23, 2008, on the occasion of the 70th anniversary of the Jewish Free School, in London. “My grandmother, Princess Alice of Greece, took in a Jewish family during the Holocaust. My father’s mother never told anybody for years. I am incredibly proud that a member of my family did the right thing,” the prince said.

This dovetails with the April 4 lecture “The Permanent Greek Exhibition at the Auschwitz Museum,” sponsored by the American Friends of the Jewish Museum of Greece under the auspices of Aghi Balta, consul general of Greece in New York. The lecture was held at the Greek Press and Communications Office a few blocks from the United Nations, and the keynote speaker was Photini Tomai-Konstantopoulou, expert minister a’ director of the Diplomatic and Historical Archives of the Ministry of Foreign Affairs of Greece. Following welcoming remarks by AFJMG President Solomon Asser, Konstantopoulou declared, “After decades of silence, today, humanity finally demonstrates the willingness to reveal… that drama that cost millions of lives.” She bemoaned the difficulty of teaching the Holocaust in Greece: “I presume that other countries encountered difficulties, as well. In effect, there has been much difficulty in making the Holocaust visible in Greece in general, but especially in the schools.”

She recalled her grandmother’s [Jewish] friends “Sarah, Bella and Gratsia”; her mother, “who also had Jewish friends,” and a “paternal uncle who married Aunt Milka, the rich daughter of a Jewish banker from Corfu… the only one that survived from the whole family from the hell of Auschwitz.” That it was at her suggestion 13 years ago that “her then-political superior, Theodoros Pangalos, minister of Foreign Affairs, let me get involved in the Holocaust. But that, as the 26th state member of the Task Force for International Cooperation on Holocaust Education, Remembrance and Research) [Greece] is [now] required to integrate the Holocaust in primary and secondary history curricula.”

Konstantopoulou informed that “In [the] Acropolis in the summer of 2010… lit with lights of alternating colors, [there stands] a broken Star of David made out of marble cut from the nearby Penteli mountain…. Since then, promenaders… of the ancient Agora… stand and ask and learn. A few meters yonder, there exists the historic Beth Shalom synagogue of Athens on Melidoni Street.” The evening concluded with a video presentation of the state-of-the-art, beautifully designed museum to be installed at Auschwitz’s Barack 18.

“A visceral search for justice [infuses] the majority of teachings of the Conservative movement,” Arnold Eisen, chancellor of the Jewish Theological Seminary, told the guests April 7, at JTS’s Louis B. Marshall Award dinner. “We brag about the finest Jewish faculty outside of Israel… 500 extraordinary students from all parts of the world whom we bring up to date with… the Internet, Podcast, Twitter and Facebook.”

New York Rep. Nita Lowey, who presented the Louis B. Marshall Award to Ruth and Stephen Hendel, lauded the on- and off-Broadway theater producers for “their tzedakah [charity].” Eisen informed that the Hendels’ hit “Fela!” which garnered 11 Tony nominations, including for best musical of 2010, is now headed for Nigeria in the middle of Nigerian elections! Raising the roof and the temperature of the evening at the Waldorf-Astoria’s Rainbow Room, the young yarmulke-topped and stiletto-heeled crowd were on their feet, undulating to the Nigerian beat of “Fela!” which had a 10-man ensemble that included brass players and drummers.

“JTS is close to our hearts,” said honoree Stephen Hendel, founder and managing partner of Hess Energy Trading Company. “We are Conservative Jews. Ruth was born Orthodox [but] became Conservative… a tradition with no political implication!” The Hendel’s Broadway involvement includes “Driving Miss Daisy,” “Golda’s Balcony” and, most recently, “Priscilla Queen of the Desert.” The evening’s welcoming and closing remarks were offered by JTS board chair Abby Joseph Cohen.

Eisen stressed: “Judaism is not something you keep to yourself…. The world needs more Jews, non-Jews, to teach future leaders [without] leaving our tradition behind us..”

“We have to look into our souls and find the tools to fight injustice and help build a better world,” said 99-year-old photojournalist and author Ruth Gruber, keynote speaker at the April 7 American Friends of Rabin Medical Center annual Women’s Luncheon, held at the Friars Club. Following the screening of “Ahead of Time,” a 2009 documentary that chronicles Gruber’s extraordinary life, she recounted that, as a student in Germany in 1931, witnessing Hitler’s rant against the Jews: “My heart was pounding so hard. I could hear it. I thought everyone else could too, and I was scared that someone would know I was Jewish.” Gruber, who is the author of 19 books, has a trajectory as a photojournalist that includes being the New York Herald Tribune’s foreign correspondent in the Soviet Arctic in the 1930s; escorting 1,000 Jewish and Christian refugees to the United States from Italy in 1944, under Franklin Roosevelt’s watch, and in 1948 chronicling the desperate plight of the refugees aboard the ship Exodus.

An audience member, 21-year-old Sasha Mishkin, asked Gruber what advice she would give to her 20-year-old self as a journalist starting out today. Gruber replied: “You have to listen to the great speakers and know what’s going on. I needed to see the world. I was lucky because I was in the right place and time, [and] someone was looking out for me.”

Upon presenting Gruber with a biography of Yitzhak Rabin, “namesake of Israel’s largest hospital, Rabin Medical Center,” Joshua Plaut, AFRMC executive director, asked: “What do you give a lady who made history?” Then he quickly responded, “A piece of history.”