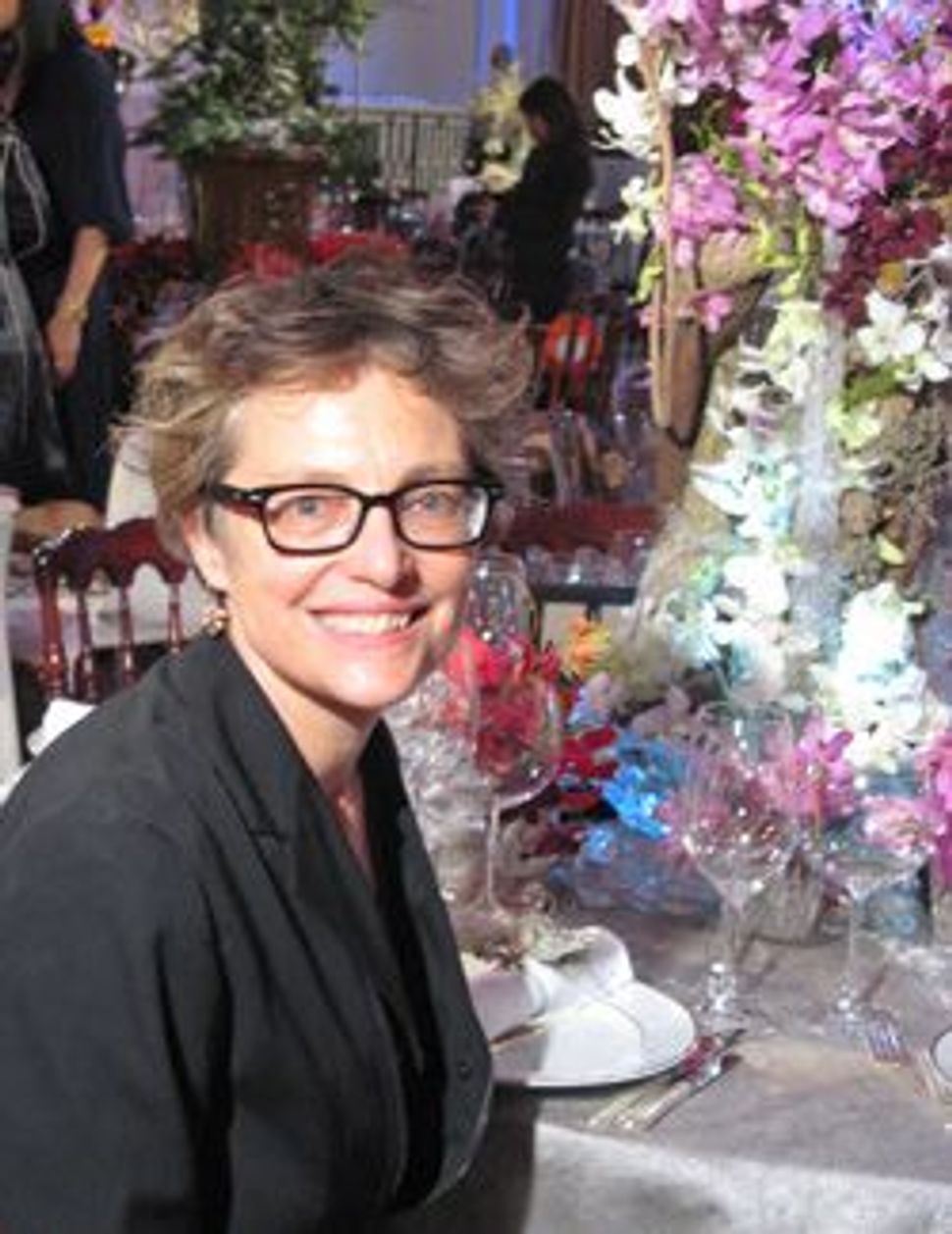 “I grew up with his paintings around me,” said Bella Meyer, floral designer and founder of the studio Fleurs Bella, describing her grandfather, Marc Chagall. Meyer was among those attending and competing April 12 in The Horticultural Society of New York’s “Flower Show Dinner Dance Showcasing Table Designs,” held at 583 Park Avenue. Paris-born Meyer reminisced about frequent visits to her grandfather in the South of France. “We used to go for walks, talk…. My grandfather spoke Yiddish, Russian and had a funny French-Romanian accent. He [believed in] freedom for the Jews…. He always spoke about ‘my Bella’ [his wife]. She was the only one who truly understood him. The only other person who understood him was his daughter, Ida, my mother.” 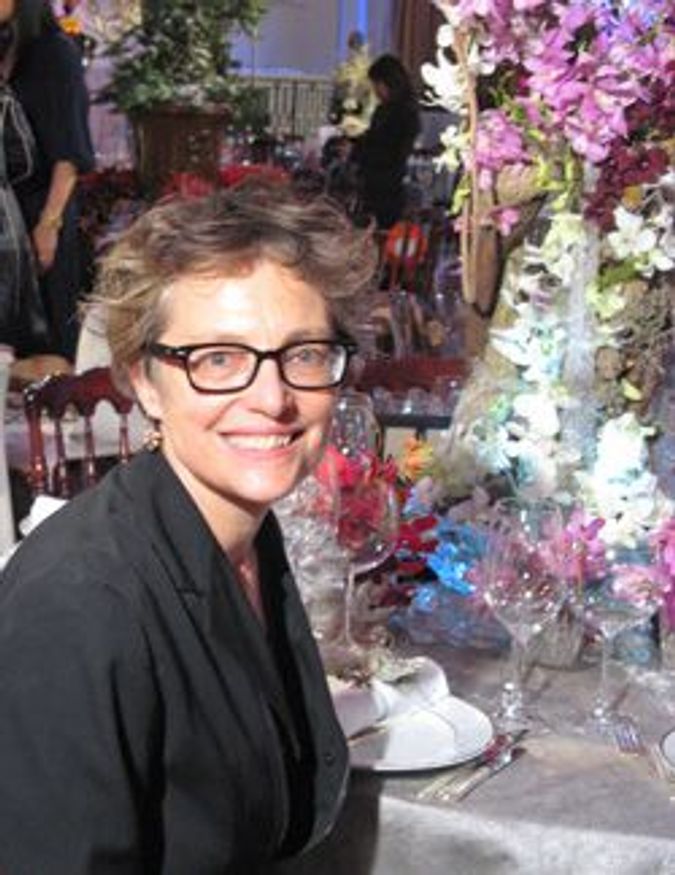 Meyer said her grandfather was instrumental in helping her understand who she was. “He would always ask us children if we found ‘your ideal.’ He taught me that each piece I do [needs] to ‘speak from the heart.’” That evening, Meyer ‘s table setting display, called “Tree of Life” won her the award for most distinctive horticulture. The display was described as an exotic design that would transport the viewer “to an imaginary world.”

In the 1970s, Meyer’s multifaceted art career took her to Israel, where, she said, she was involved in a 1973 archaeological restoration research project for the Israel Museum. She also told me, “I have a twin sister, Meret Meyer, who takes care of the Chagall estate, and my older brother, Piet Meyer publishes art books.”

Among the two dozen imaginative floral design table-setting exhibitors was Ayako Tachikawa, listed in the program as “a master professor in Japan’s traditional flower art, known as Ikebana.” Tachikawa, CEO of Kobe-based Rhapsody, Inc., said she hoped “to bring East and West together via floral design.” With the help of a translator, we reminisced about “old Kobe,” where I had lived in 1941, in a section known as Yamamoto Dori — a part of Kobe that disappeared in the massive 1995 earthquake.

During my conversation with the society’s executive director, Sarah Hobel, I discovered that Hobel’s husband, Scott Mendel— now a literary agent with his own agency, Mendel Media — taught Yiddish at the University of Chicago and at the University of Illinois at Chicago. The event’s honorees included Frances Tenenbaum, Houghton Mifflin’s legendary gardening books editor.

When I asked Ann Bialkin, founder and chair of ELEM/Youth in Distress in Israel, why the organization chose the musical “The Book of Mormon” for its annual theatrical fundraiser, she smiled and said: “We were all concerned. And then came the reviews!” The 200 benefit tickets, which raised $100,000 for the organization, , sold out fast. There was not an empty seat at the April 14 performance at the Eugene O’Neill Theatre. From the opening production number, when the young, white-shirted Elder Cunningham (Josh Gad) and his partner, Elder Price (Andrew Rannells), backed up by the all-male chorus line of Elders, began ringing imaginary doorbells, the audience was on a rollercoaster of laughter. The Mormon “history” that is recounted in the play includes reference to two Jewish tribes that “long ago” paddled their way to America, a mention that heightened the ELEM crowd’s laugh-meter output.

As the plot develops, Elders Cunningham and Price are assigned to a backwater Ugandan village whose doctor proclaims to them, “I’ve got maggots in my scrotum!” The duo is confronted with such issues as clitoral circumcision and the local belief that “sleeping with a baby” is a cure for AIDS! The Mormon lads also seem shell-shocked when told, “Not to worry, 80% of us have AIDS.” It may not read funny, but as one ELEM guest told me during the post-theater reception, “I haven’t laughed so much in a long, long time!” The villagers, who envision Salt Lake City as the ultimate reward for their redemption, are not aware that — as the Elders tell the audience — it was not until 1978 that they would become acceptable for redemption in Mormon heaven.

Produced by Anne Garefino and Scott Rudin; co-directed by Casey Nicholaw, who also choreographed the musical, and with book, music and lyrics by Robert Lopez and the award-winning creators of the animated series “South Park” — Trey Parker and Matt Stone — the musical sends a basic message that doing the right thing trumps religious specifics. Bottom line: Who cares what you believe in, if, through your actions, you save lives, rescue communities and give people hope?

In Israel, ELEM is known for the quality care it provides for at-risk youth — whether Arabs, native-born Jews or recent immigrants. Founded 29 years ago, ELEM now has a network of professionals and volunteers covering 30 cities and villages throughout the country, and it reaches more than 50,000 youths annually. ELEM provides preventive treatment, counseling centers, rehabilitation intervention, vocational training and mobile humanitarian services. It offers a safe haven, a sympathetic ear and a voice for the largely invisible troubled youth of Israel.

Itzhak Perlman, With N.Y. Philharmonic, Thrills at a Night of Cinematic Nostalgia

Call it nostalgic or “schmaltzy,” as someone did during intermission, but the April 11 presentation of Itzhak Perlman — who, conducted by Alan Gilbert, performed music from Vienna and Hollywood with the New York Philharmonic — at Avery Fisher Hall was an audience pleaser, a tear-duct activator and a multiple standing ovation event. Tickets sold out like zudike bialys, hotcakes. Why this particular food allusion? Because behind me sat former New York Times food critic Mimi Sheraton, who wrote the book, “The Bialy Eaters: The Story of a Bread and a Lost World” (Broadway Books, 2000). And like that distant relative of the bagel, the evening’s music was a treat for the gut as well as for the soul. As Sheraton and I chatted, Alan Alda sauntered down the aisle.

Perlman tweaked many memories with his interpretation of “As Time Goes By.” from the 1942 film “Casablanca.” I was not the only one dabbing at my eyes during his rendition of John Williams’s “’Theme From Schindler’s List’” from Steven Spielberg’s 1993 film. The evening’s classical program included a performance of Mozart’s overture to “The Magic Harp” and Beethoven’s “Leonore Overture No 3.” Play it again, Perlman!