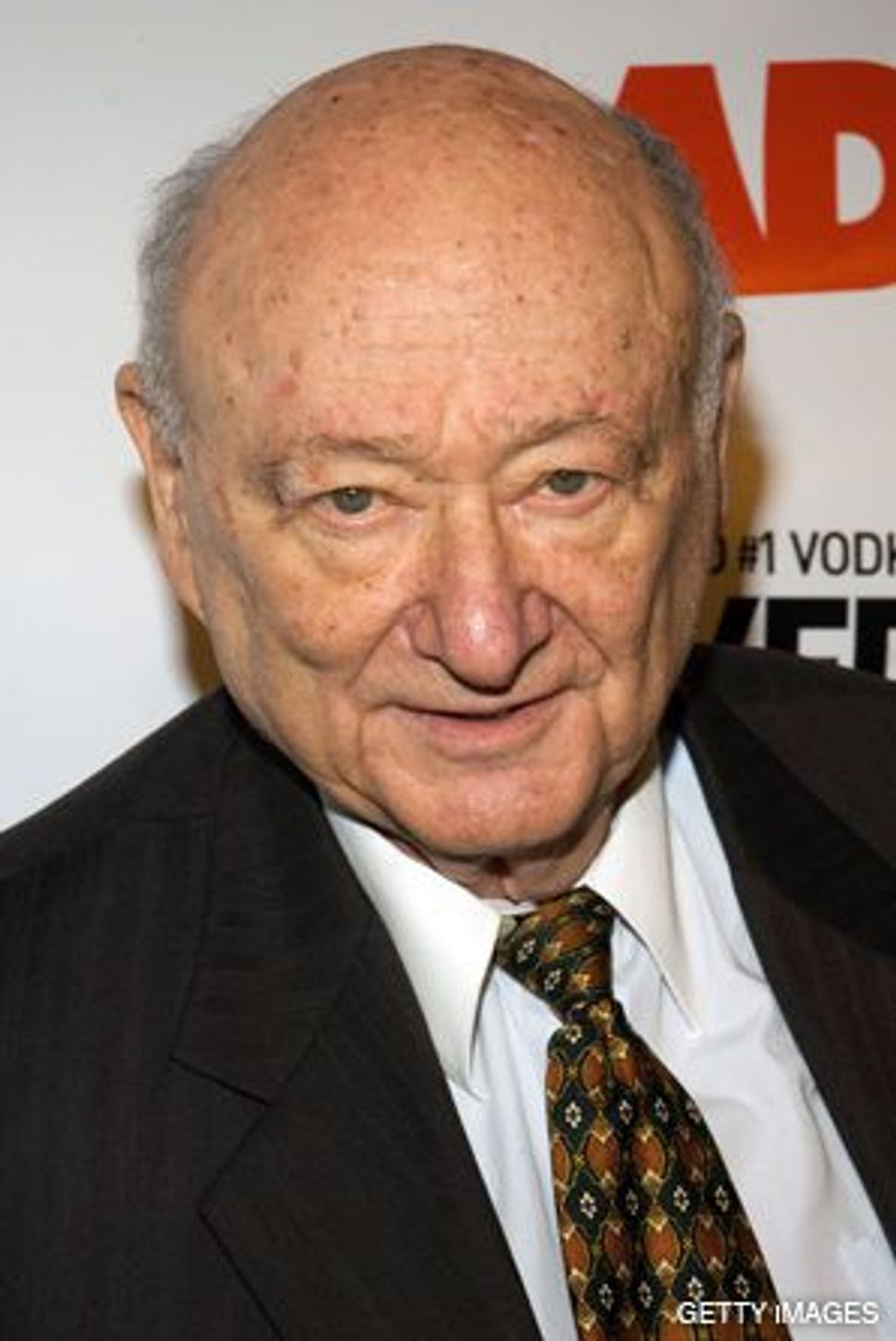 The critics agree: “Wall-E,” the animated summer blockbuster about a cute robot collecting garbage in the aftermath of a man-made environmental apocalypse, is a fantastic film. 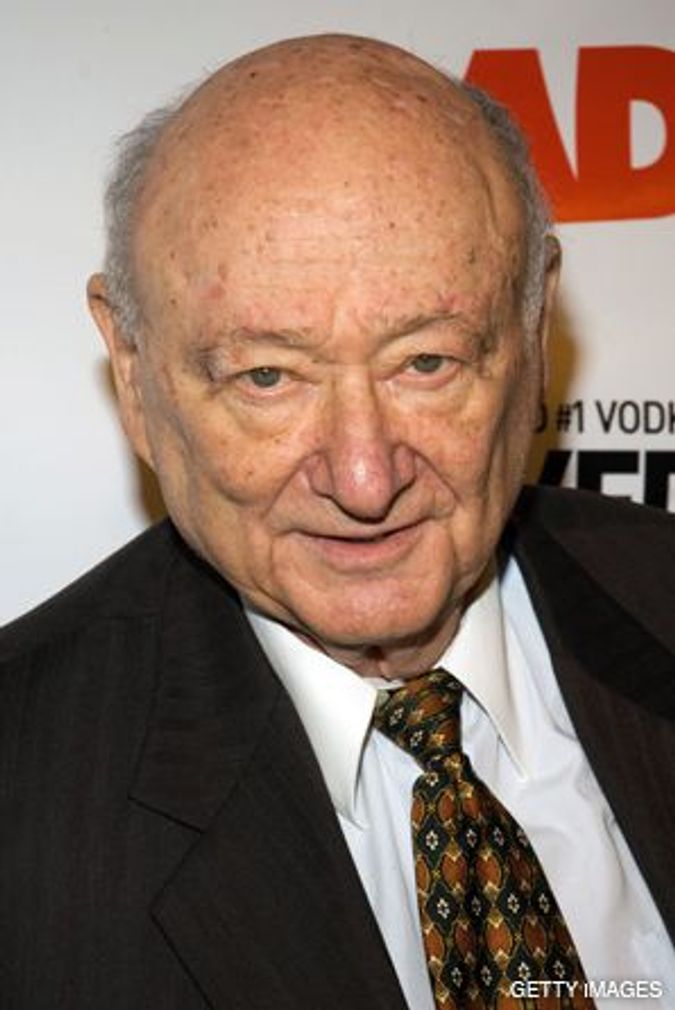 Okay, maybe not all of them agree.

“Ridiculous,” former New York City mayor Ed Koch wrote of the critical raves for “Wall-E.” Koch, who reviews movies for the Manhattan community newspaper The Villager, panned the film that has been given the thumbs up by an astonishing 97% of critics, according to the review aggregator RottenTomatoes.com.

“This is your Captain speaking,” Koch wrote. “Take cover, take cover. Don’t leave your home to see this flick. It is toxic.”

Contacted by The Shmooze and asked to elaborate, Koch noted that he tends to dislike animated films. But Koch — an outspoken critic of the Kyoto Protocol on carbon emissions who also says he believes that global warming is a real problem — conceded that the movie’s message “probably unconsciously” rubbed him the wrong way. “Al Gore, if he sees it, as I’m sure he will if he hasn’t already, will lose 10 pounds in giggling,” Koch said.

Koch’s main criticism, however, was that he found “Wall-E” to be “dull, dull, dull.”

It’s not the first time Koch has found himself at odds with his fellow film critics. The former mayor estimated that “40% of the films that get high marks from the reviewers are lousy.”

Asked why that is, Koch answered, “They have lousy taste.”

Below is an edited transcript of the Forward’s interview with former New York City mayor and Villager film critic Ed Koch conducted July 9.

I wanted to speak with you about your review of “Wall-E.”

I’m one of the few critics who writes professionally — because I do have my reviews published in several newspapers — who found it ludicrous that this movie received such great reviews from the Times, The Wall Street Journal and others. I’m amazed. And I’m supported in my feelings by a number of people who come over and say, “Yay for your review,” after seeing the movie based on the other critics’ positive reviews.

Why did you hate the film so much?

Well, truth in packaging is always important for a columnist: Firstly, I don’t expect much from cartoons, that’s number one. And every time I’ve seen one, with rare exception, I’ve been really disappointed and felt I had had a wasted night. But this one received such extraordinary reviews, and obviously it’s the subject that intrigues people: I mean you have a movie that’s devoted to the environment, to having to leave Earth, to what’s happened to the Earth people who are in the spaceship who become indolent and obese waiting to return, and then this cute little machine cleaning up in a small spot on the Earth, and falling in love with another machine that doesn’t look at all to be of the same species. And I didn’t find it cute, and I didn’t find it amusing, and I didn’t find it uplifting. I found it to be a bore.

Did you have any issues with the not-so-veiled political message of the film?

Oh, there’s no question. Al Gore, if he sees it, as I’m sure he will if he hasn’t already, will lose 10 pounds in giggling.

Are you a skeptic on global warming?

No, I believe in global warming. My opposition to the Kyoto treaty has been for years that China and India were excluded. And I was berated by all the environmentalists who didn’t like my point of view, and now suddenly everybody realizes that China is number two in the use of fossil fuel and number one in the discharge of the gases that cause global warming. And, finally, the G-8 group that met said that they will take on goals, but only if China is included. That was announced in today’s paper. So I feel vindicated.

Did the global warming politics in this film play any role in your dim view on it?

Probably unconsciously. I mean, I believe that the people who constantly berate the United States and don’t include China as being required to be included, along with India, are doing great damage to the United States. I think those people — they’re mostly Americans, constantly beating up America unfairly — they’re masochists, and I am for dealing with global warming. And if you put China and India in Kyoto, I’m for our being in there, too. But not being in there if the two largest nations of the world population-wise are excluded.

The other outlying critics who also didn’t like the film, some of them said it was preachy.

Well, it is! There’s no question about that. But it’s boring. They say preachy, I say boring.

So that was your main issue? You just found it dull?

Was there much dialogue? I read that it was a pretty quiet film.

Do you often find yourself out of step with the rest of the critics?

Often. Let me tell you how I pick my movies: I don’t have a lot of time, and this is not my profession. I do it because I enjoy it. I like movies. And I read the Times and the other papers on Friday, when they do the reviews. And then I select for the two movies that I might see over the weekend on Friday and Saturday from the list of those that have received very good reviews from the Times, The Wall Street Journal or Post, etc. And I discard all the ones that they didn’t like, and the reason being that I have found over the years that 40% of the films that get high marks from the reviewers are lousy. So I don’t want to waste my time with the ones that they think are lousy, because they have to be worse than lousy to have gotten that designation. And so I find from the list of those that are deemed to be good, really good, that 40% at least are terrible, and I’m disappointed in them. So I’m a very tough critic, and people know me when I go to the movie houses, and they come over, and they chat about films. Overwhelmingly, they have agreed with me. Overwhelmingly. And they urge me on. And that makes me feel good.

Is there any meta-reason why critics are predisposed to liking movies that are “lousy”?

They have lousy taste.

Is this like William F. Buckley saying he’d rather be governed by the first 2,000 people in the Boston telephone book than by the faculty of Harvard?

Bill Buckley, who I knew, and who I loved, never said anything that wasn’t true. So that’s a true statement.

Is it a similar thing with critics, that you’d be better off asking 50 people on the street what they think?

Except for you right? You’re the exception.

Well, there has to be one exception.