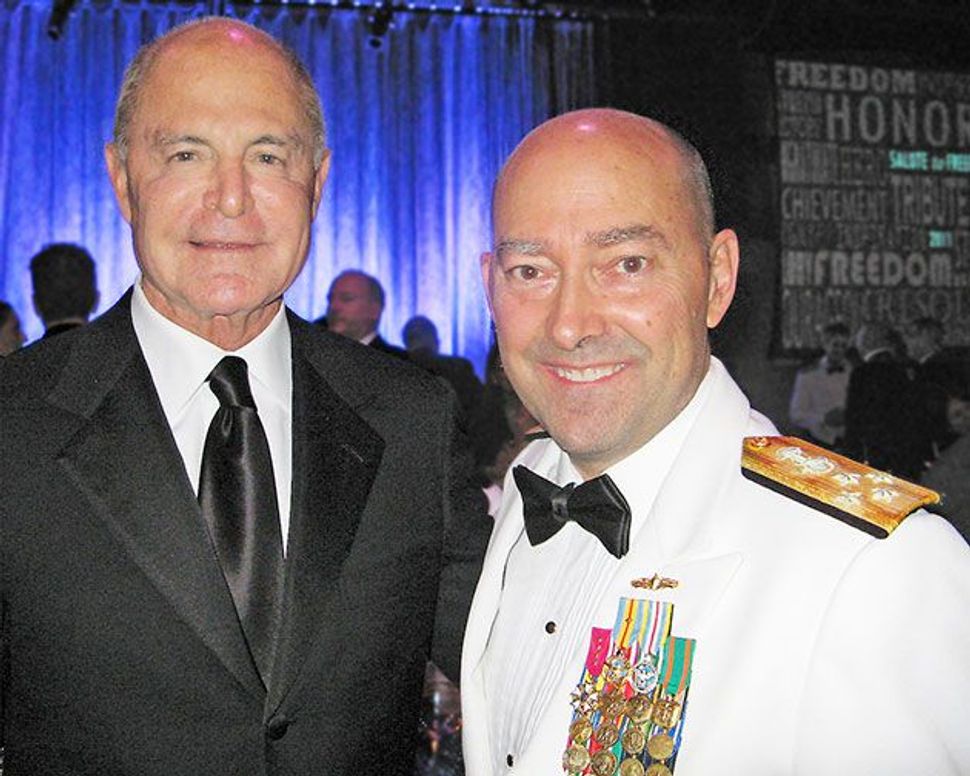 “He is a Renaissance admiral and a consummate diplomat,” Mel Immergut, co-chair of the May 26 Salute to Freedom Award Dinner, said of multifaceted Admiral James G. Stavridis, recipient of the 2011 Intrepid Freedom Award. Immergut, chairman of Milbank, Tweed, Hadley & McCloy LLP and a 2006 recipient of the Simon H. Rifkind Award from the Jewish Theological Seminary, listed but few of the admiral’s rankings and proficiencies: He is NATO’s Supreme Allied Commander of Europe and commander of the U.S. European command. He also noted that Stavridis holds a doctorate in international relations, law and diplomacy from Tufts University and is the author of several books.

Addressing the nearly 1,000 guests aboard the Intrepid Sea, Air & Space Museum, Stavridis said: “I will not inflict my own voice.. .but will give voice to the men and women who have fallen in our service, stood watch on our behalf in 1,000 different places…. On Memorial Day, I read to you words… some from grieving parents… a love letter from a Civil War soldier before the Battle of Bull Run to his wife, Sarah….. A letter from a soldier to a daughter in Madison, Wis., saying: ’Sorry, I broke my promise when I promised to come home. Stay beautiful, stay sweet. Find it in your heart to forgive me for leaving you alone. Go outside, look at the stars.’”

“What do we take from these letters?” posited Stavridis, whose service record includes the staff of the chairman of the Joint Chiefs of Staff, executive assistant to the secretary of the Navy and senior military assistant to the secretary of Defense. “We are lucky to have such men and women who say ‘Take me.’ The words in these letters matter. We keep supporting their families. Hug and kiss your children. Go out, look at the stars and smile. What else matters?”

Among the evening’s speakers were two soldiers who had been severely wounded. They credited their survival to the military’s medical protocols and speed of response. They expressed gratitude for the Fisher House Foundation, which helped them and their families during their time of need.

The texture of the evening brought back the memory of the October 24, 1995, dinner aboard the Intrepid, at which Israel’s prime minister, Yitzhak Rabin, an honoree, said: “At that hour, they are still laughing and weeping, still weaving plans and dreaming about love, still musing about planting a garden or building a house — and they have no idea these are their last hours on earth. Which of them is fated to die?” Rabin recalled “the terrifying silence of the moment before he issued orders for hundreds of military operations” when he was military commander. “I shall always remember the moment just after making the decision to mount an action, the hush as the senior officers slowly rise from their seats, the sight of their receding backs… and then the silence, in which I remain alone. That is the moment you grasp that as a result of the decision just made, people will be going to their deaths — and they still don’t know it.” Eleven days later, on November 4, Rabin was assassinated.

“It’s a good thing that Karl Marx is dead,” joshed Stanley Fischer, governor of the Bank of Israel and keynote speaker at the May 16 American Friends of the Hebrew University Gala, held at the Pierre. “Can you imagine Freud, Einstein and Marx! [Marx] was a contemporary of the university’s founders [who included] Einstein, Freud, Martin Buber and Chaim Weizmann.”
Fischer touted Israel’s vibrant economy: “We are back to full employment… we have a surplus in our balance of payments…. Our exports are doing well… [but] we face a poverty rate of 60% — and rising — among the Arab and Orthodox populations. Only 30% work, the rest study. It will have to stop!”

Michael Federman, chairman of the board at the Hebrew University of Jerusalem, presented the American Friends of Hebrew University’s Scopus Award to Jacob Frenkel, chairman of JPMorgan Chase International, The program noted that Frenkel “is credited with reducing inflation in Israel… liberalizing Israel’s financial markets, and integrating the Israeli economy into the global financial system.” Between 1987 and 1991 he was the economic counselor and director of research at the International Money Fund.

Australian-born James Wolfensohn accepted H.U.’s Truman Peace Prize from gala chair Barbara Mandel. The third president in the World Bank’s history to be reappointed for a second five-year term, Wolfensohn, who was on Australia’s 1956 Olympics fencing team and served as an officer in the Royal Australian Air Force, shrugged and remarked, “I don’t have a hell of a lot to say.” An admirer of president Harry Truman, Wolfensohn, a naturalized American citizen and currently chairman and CEO of Wolfensohn & Company, LLC, added, “Truman acted against advice.”

Carmi Gillon, H.U.’s vice president for external affairs, lauded H.Y. as “the jewel in the crown of Jerusalem” and said that the university is “recognized as a world-class institution which boasts seven Nobel Prize winners in one decade.” He added that among its many innovations is “the development of the drug Doxil, for Alzheimer’s disease,” and that “most of the world’s cherry tomatoes come from Hebrew University.”

“Picasso was also a philosopher. He said, ‘We do not grow older, we grow riper,’” stated Dr. Mark Lachs, keynote speaker at the Jewish Association for Services for the Aged May 18 benefit, held at the Museum of Modern Art. Introduced as “a rising star in geriatric medicine” by JASA trustee Ruth Perelson, Lachs, author of “Treat Me, Not My Age: A Doctor’s Guide To Getting the Best Care as You or a Loved One Gets Older” (Viking Penguin, 2010), recalled how he had been influenced by the medical TV shows of his youth. “The least tainted was ‘Dr. Kildare,’ an insufferable son-of-a-bitch who chain-smoked, transfused a lady with his own blood and was the prototypical narcissistic, militaristic doctor. My favorite was ‘Medical Center’’s Chad Everett, [who portrayed Joe Gannon], a generalist who did bypass surgery, delivered a baby and cured someone of blindness. These medical jack-of-all-trades no longer exist. We now have left- and right-thumb specialists. This is not how a geriatrician works today. [The approach is] low touch, high tech…. But the most compelling disease of JASA clients is loneliness. Isolation kills.” JASA’s president, David Warren, informed: “We deliver 700,000 homebound meals, 70% of which are kosher, as well as 600,000 congregate meals during the year…. Often the JASA driver is the only person [a client] will see when not hospitalized.”

John Ruskay, executive vice president and CEO of UJA-Federation of New York, of which JASA is a member agency, offered greetings. Following the reception, the guests proceeded to view the MOMA exhibition “Picasso: Guitars 1912–1914.”

The 92nd Street Y Celebrates Its Own 25th Gala and the 40th Anniversary of Earth, Wind & Fire

In honor of the rhythm and blues group Earth, Wind and Fire’s 40th anniversary, the 92nd Street Y — which was also celebrating its 25th anniversary on May 16 — decorated three of its rooms green (for earth), blue (for wind) and red (for fire). Thomas Kaplan, president of the Y’s board of directors, dubbed both the Y and the music group “elemental” forces, adding: “It is our service to the community that is most elemental…. It is the thing that brings us together.”

Event co-chairs Mara and Ricky Sandler informed that the night’s 600 guests — who danced away in the aisles — helped raise $2.7 million.