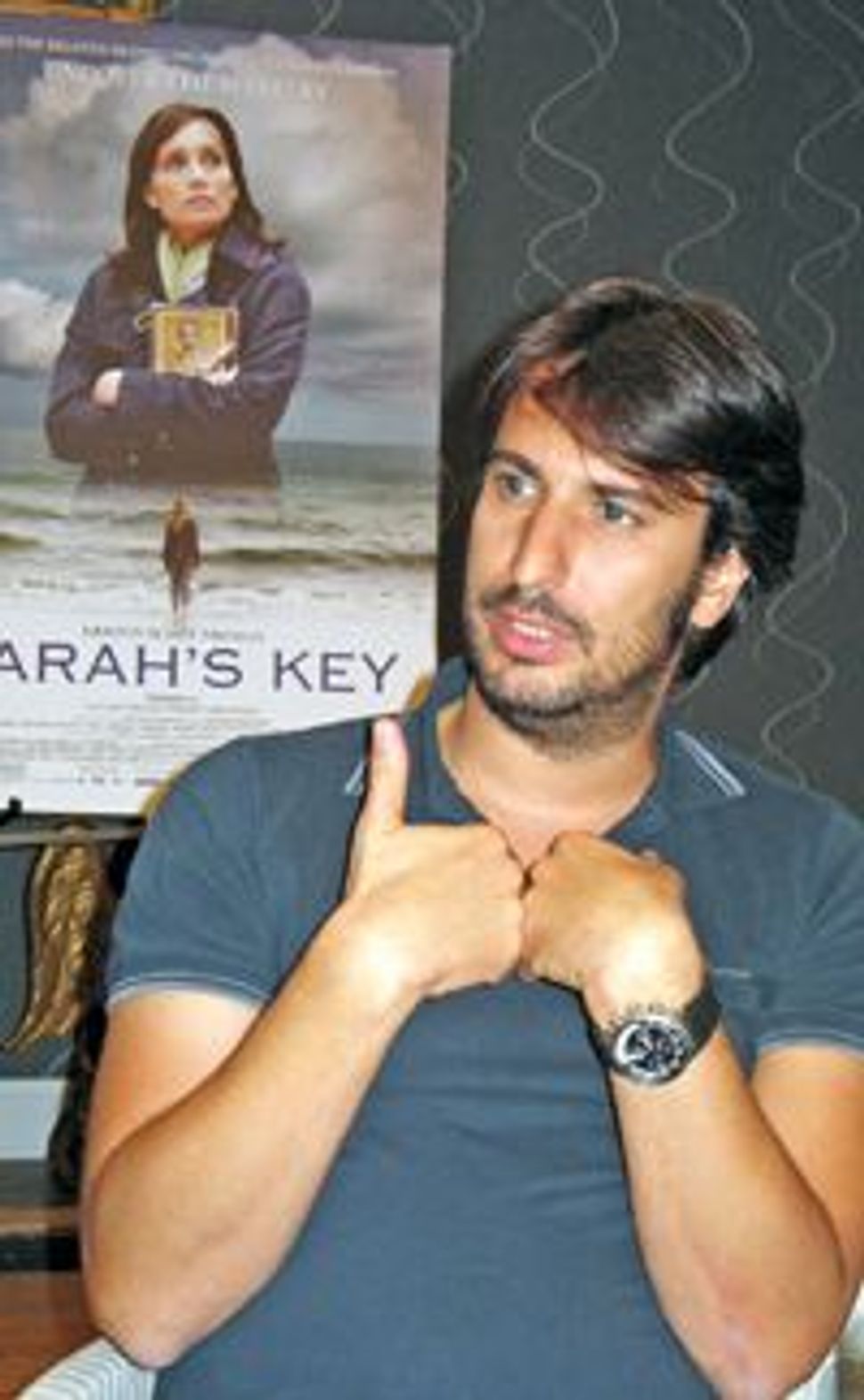 “I am not a person who scares easily, but of this scene I was scared,” said Gilles Paquet-Brenner, director of “Sarah’s Key,” during the interview at the Crosby Street Hotel in SoHo a few days before the film’s July 22 opening. He was referring to the film’s re-creation of the panic that ensued during the July 16, 1942 round-up by French Police of Jewish men, women and children who had been herded into Paris’s Velodrome d’Hiver (Vel’ d’Hiv’) sports stadium before being shipped off to their death.

“During the one and a half days we shot the chaotic Vel’d’Hiv’ scene, I had the cameraman go into the heart of the frenzied crowd, where, as he was shooting the scene, he was pummeled by the actors. Everyone on the set was crying. We knew we had a responsibility. Next to me sat Annette Muller who [as a 9-year old] survived deportation.” In 1942 she was the same age as the film’s young Sarah, whose portrayal, by Melusine Mayance, is astonishing. 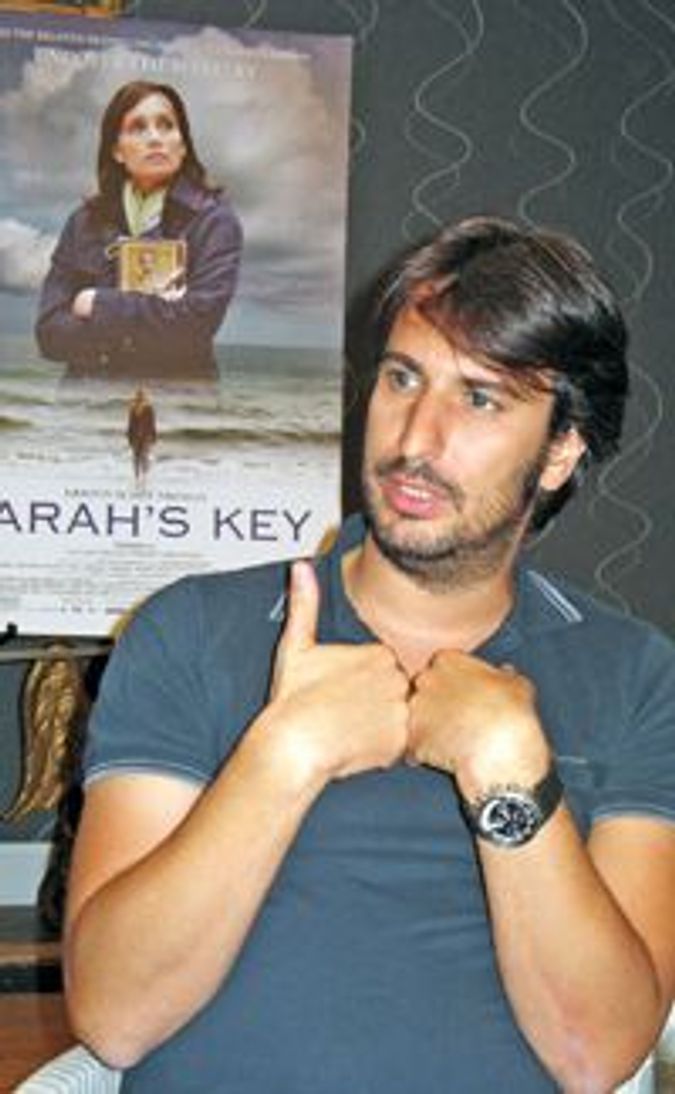 Paquet-Brenner said: “I am of Jewish origin… a secular person. My grandfather was a German Jew who had been denounced by some French people and sent to his death in the camps.” Tatiana de Rosnay, author of the international best-seller “Sarah’s Key,” on which the film, produced by The Weinstein Company, is based, told me: “Writing the book has changed me. Here was a subject, taboo for 60 years, surrounding one of the darkest moments of our history. Why, as French citizens, were we not told until 1995 by [then president Jacques] Chirac what happened? I was horrified that there was not even an historical book [describing] the trauma. Actually, the film is about a woman’s self-discovery.” In the film, American journalist Julia Jarmond, portrayed by Kristin Scott Thomas, begins an investigation about the Vel’d’Hiv’ tragedy that sets her on a journey leading to Sarah’s son (Aidan Quinn).

“Sarah’s Key” (St. Martin’s Griffin, 2008) has been published in 38 countries, has sold more than 1 million copies in the United States and was on the New York Times Best Sellers list for 120 weeks. Upon her return to Paris, De Rosnay, as promised, sent me a copy of Annette Muller’s autobiography, in French, with its dedication to “Rachel Muller, my mother whose name is engraved at the monument at Beaune-la-Rolande.” In the film, Beaune-la-Rolande is the campsite setting for the indelibly wrenching re-enactment of the French police tearing hysterical deportation-bound mothers from their screaming children. “The Beaune-la-Rolande camp was originally intended for Germans,” Paquet-Brenner told me during our interview. And yes, he told me, as shown in the film, “two children did manage to escape that camp.”

Thanks to “Yiddish consultant” Rosa Rotsztein, the film’s Yiddish-speaking actors deliver on-key articulation of Galizianer and other Yiddish dialects. Another plus is the opening soundtrack of a young girl singing Itzik Manger’s postwar lament, “Oyfn Veg Shteyt a Boym” (“On the Road Stands a Tree”), set to music by Philip Laskowsky (neither Manger nor Laskowksy is credited). “Sarah’s Key” also offers the never-before-seen-in-film Paris Holocaust Memorial, on which is inscribed the names of the 76,000 French Jews sent to Auschwitz. The monument has a multi-wall collage of photos of the 11,000 Jewish children deported from France.

“It was the memory of my mother, Hadassah, who had breast cancer twice,”Joshua Plaut cited as the catalyst for his organizing the July 17, NYC Schlep: Jewish Breast Cancer 5k Run/Walk, held at New York City’s Battery Park. “One in seven Jewish women will be diagnosed with breast cancer in their lifetime” said Plaut, executive director of American Friends of Rabin Medical Center’s New York office, which organized the event. New York State Assemblyman David Weprin, who is running for the Congressional seat vacated by Anthony Weiner, told the 200 participants — including 88-year-old Grace Salant, who completed the entire course in just a little more than an hour — “All of us are partners with AFRMC to raise awareness of breast cancer among Jewish women in America and Israel.” The $56,000 raised is earmarked for cancer research at Rabin Medical Center at Petah Tikva /Tel Aviv, Israel.

At Lincoln Center: Rare ‘This Is Your Life!’ 1950s and ’60s TV Episodes Showcasing Holocaust Survivors

Three restored episodes of the documentary series “This Is Your Life” featuring Holocaust survivors were shown at Lincoln Center’s Walter Reade Theater on July 17 as part of the University of California, Los Angeles’s Film & Television Archive’s Festival of Preservation. Righteous Persons Foundation and the Ronald T. Shedlo Preservation Fund funded the showcase. The event’s host was Aviva Weintraub, associate curator and director and director of the New York Jewish Film Festival at the Jewish Museum. In each of the three episodes, series host, Ralph Edwards ambushes an unsuspecting woman in the audience — who happens to be a Holocaust survivor. Brought onstage, the “victim” or “star” sits, shell-shocked, as Edwards reads her life history (which may include forgotten or painful episodes), and long-absent friends and family members are brought onstage.

In a 1953 episode of “This Is Your Life,” Edwards plucked an elegant, charming Hannah Bloch Kohner from the audience. She seemed dazed. Born in Czechoslovakia, she survived four concentration camps (including Theriesenstadt and Auschwitz) and went on to reunite with and marry her childhood sweetheart, Walter Kohner, also a survivor. Her husband became a Hollywood theatrical agent. During a question-and-answer session after the screening, the Kohners’ daughter spoke. Julie Kohner, founder and CEO of the not-for-profit charity “Voices of the Generations,” which sponsors Holocaust education, said to Weintraub, “My mother was the first Holocaust survivor to be interviewed on national TV!”

In a 1961 episode of “This Is Your Life” Edwards plucked from the audience Sara Veffer, a stocky woman who looked like the prototypical powerhouse yidishe mame of 1930s stage and screen. She described how she, her husband and their five children spent 1000 nights hidden in an 11-by-12 room — in total silence. By the end of the war, the room, replicated to scale onstage, held 10 people. At the episode’s closing, the stage was crowded with Veffer family members and friends, and the daughter of the Dutch family that hid them at their own peril.

I found these half-century-old, restored black-and-white “This Is Your Life” episodes — Holocaust testimonials juxtaposed with commercials for Hazel Bishop No-Smear Lipstick — disquieting and surreal. Did the studio audience, which enthusiastically applauded at the pleasure of prompters, and the American TV audience at the time, fully comprehend the unarticulated horror and memories to which these survivors were being subjected? As invaluable as these restored public testimonials are, for a fleeting moment I felt as though I had been viewing episodes of Rod Serling’s “The Twilight Zone.”