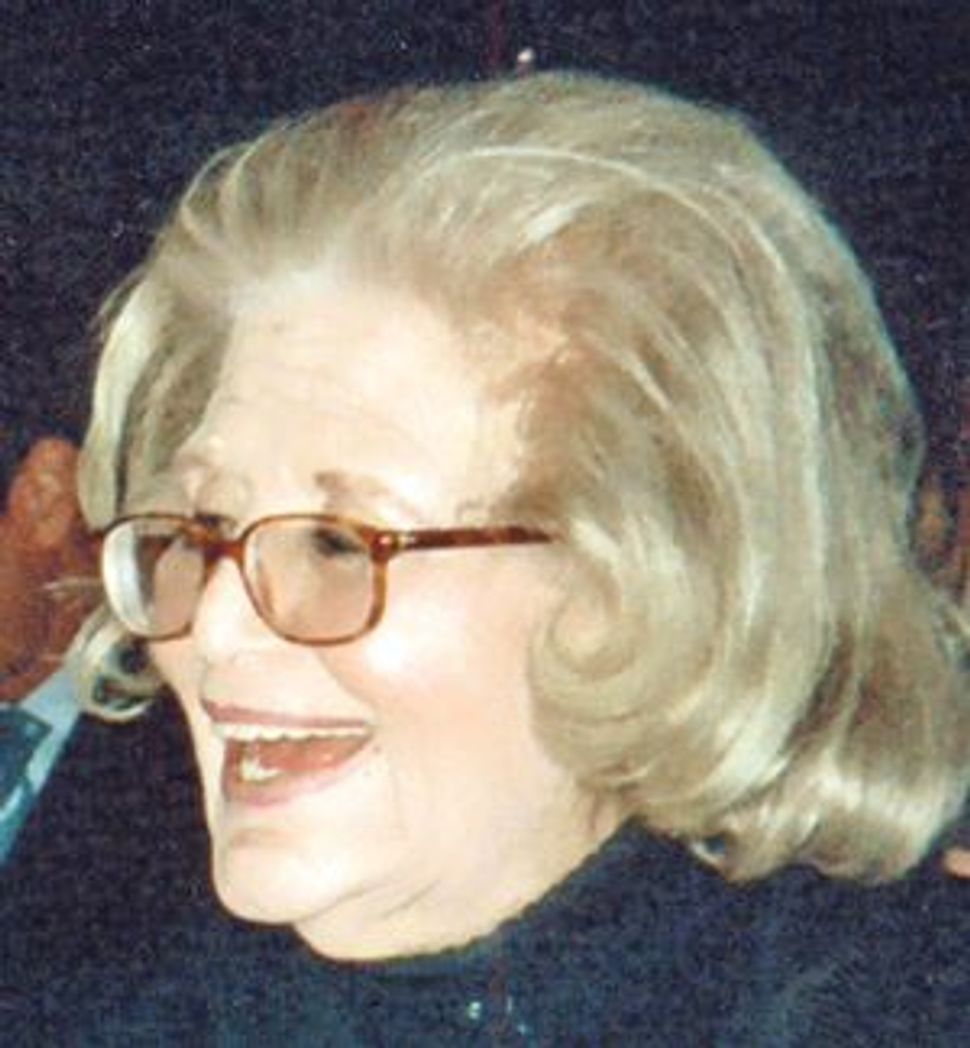 “If she had been on the Titanic, it would not have sunk,” said NYC Police Commissioner Ray Kelly, one of the eulogizers at the August 21 funeral of Sally Goodgold, whose death at the age of 82 on August 18 sent shock waves through New York City’s civic and Jewish communities. The funeral was held at Plaza Memorial in Manhattan, and the casket was draped with New York City’s flag — a rare honor, for which Sally’s son, Jay Goodgold, thanked the Commissioner and Mayor Michael Bloomberg.

“She was a tireless force for the good of the city…. She helped build bridges of understanding between communities of all faiths,” said Kelly. “She helped make New York City a safer and best place to live…I’d known her since I was a captain, 25 years ago. She was always someone I could go to.”

Assistant rabbi at Park Avenue Synagogue Steven Rein led the service. He said, “She was a legend at Park Avenue Synagogue,” and then read a letter from PAS’s senior rabbi, Elliot Cosgrove, who was unable to attend. “Sally knew everyone, and everyone knew Sally,” wrote Rabbi Cosgrove. “Upon arriving in New York from Chicago, she took me to lunch, gave me a crash course in New York politics past and present — the first of several tutorials. She stood at the crossroads of New York City Jewish and civic life…. She [achieved] Churchill’s bar of being able to walk with kings, but never losing the human touch.” 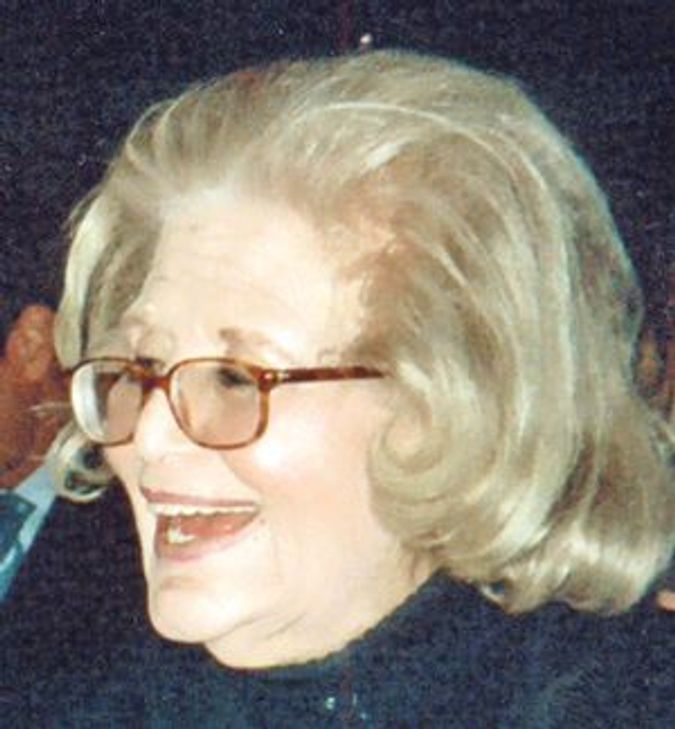 Rabbi Ken Stern of Congregation Gesher Shalom, Fort Lee, N.J., and a former rabbi at PAS, also spoke. “She never got into politics directly, to keep her independence,” he said. “Without her wisdom, wit, insight, communal friendships and passion, we are all diminished.” In his tribute, Rabbi Michael Miller, Executive V.P. and CEO of the Jewish Community Relations Council, said, “When I came to the JCRC in 1984, I was in awe of her. She loved to go to meetings! She derived nakhas from Ray Kelly’s accomplishments. If the JCRC wanted to reach out to the police commissioner, they needed her permission!” In his address, PAS Rabbi David Lincoln recalled, “She arranged for me to attend a private meeting with [South Africa’s] President Nelson Mandela.” He added, “It is not enough to just remember the memory of someone. [We need to] try to lead the kind of life she wanted us to lead.” Rabbi Michael Siegel, of Chicago’s Anshe Emet, said,“ The synagogue was an extension of her life…. She was a force of nature.”

A 1949 graduate of Bucknell University, Sally Goodgold’s long list of positions includes: member of the board of the New York City Police Foundation; first woman president of the City Club of New York; member of the Settlement Housing Fund, the Hayden Planetarium, and The Citizens Union; and consultant to the Women’s Bureau of the United States Department of Labor.

Jay Goodgold spoke on behalf of the family — his sister, Iris; his wife, Karen; their children, Michael, Dina and Jonathan; and his mother’s sister, Betty Gottfried. “My mother loved this great city. Her imperative was Tikun Olam — how to repair the world. Henry Kissinger did not invent ping-pong diplomacy. My mother was a ping-pong champion!”

At the April 15, 1998, Three ‘I’ Awards presentation at Central Park’s Arsenal, Sally Goodgold, as usual, was introducing people to one another. The event, hosted by then Parks Commissioner Henry Stern, was on behalf of the New York Metropolitan Region of the American Jewish Congress and honored consuls general from countries whose names started with the letter “I”: Shmuel Sisso of Israel, Franco Mistretta of Italy, and Barrie Robinson of Ireland.

“What’s with ‘Calpurnia’?” I asked Goodgold, apropos the brass name pin she wore in her lapel. Goodgold, then a volunteer for both the Parks Department and AJC Congress, laughed: “The Parks Commissioner likes to give everyone a special name. Henry is known as ‘Starquest.’ His dog, an Irish setter who is Jewish, is ‘Boomer,’ and Mayor Giuliani is ‘Eagle.’” I joshed, “So, Stern named you after Caesar’s above suspicion wife—she without a hint of scandal.” Without a word, Goodgold linked her arm through mine and brought me over to Stern. “You have to give her a name tag,” she told him. Stern, whom I had met before, gave me a head-to-toe once-over and said, “O.K., Sally.” A few weeks later, in the mail came my Stern moniker — “Vitality.” For a few years after that, whenever we met, I’d greet Goodgold with, “So how’s Caesar’s wife doing?” Her usual reply: “Don’t ask.”

“I’m an animal rights guy, and I care passionately about animals,” Leslie Alexander, co-host of the August 20 “Get Wild” Evelyn Alexander Wildlife Rescue Center benefit, told me. The event was held at the Waterfront estate of Liz Brown and Leslie Alexander in Southampton. The formerly named Wildlife Rescue Center of the Hamptons was renamed by Alexander in memory of his mother. Among the high-profile guests were Beth Ostrofsky Stern and Howard Stern. When I asked Alexander — one of a number of Jewish owners of NBA teams — about his team, he replied, “I now have one team—the Houston Rockets.” Apropos one of this bios’ notes that “sometimes the team’s dance squad wears ‘Animals Have Rights’ shirts” and that “complimentary dinners are vegetarian,” I asked if he was a vegetarian. “No,” he replied. “I am not, but I am PETA [People for the Ethical Treatment of Animals] all the way.”

Raised in New Jersey, Alexander, a member of the Humane Society of the United States, told me, “My grandmother was from England. My grandfather from [somewhere] in Russia. I have a dog. I also have an animal sanctuary for horses in Virginia, where we give horses older than 24 good lives.”

The center’s facility for wild animals is located in a unique and irreplaceable ecosystem, which consists of salt and fresh wetlands, deciduous forest and meadowlands. Its executive director, Virginia (Ginnie) Frati — founder of the wildlife center— thanked the guests for their support and said: “We are able to offer state-of-the-art care to our wild neighbors that so richly deserve it because they are usually injured by human activities.”