Congress Moves To Punish Palestinians, But Even Israel Objects 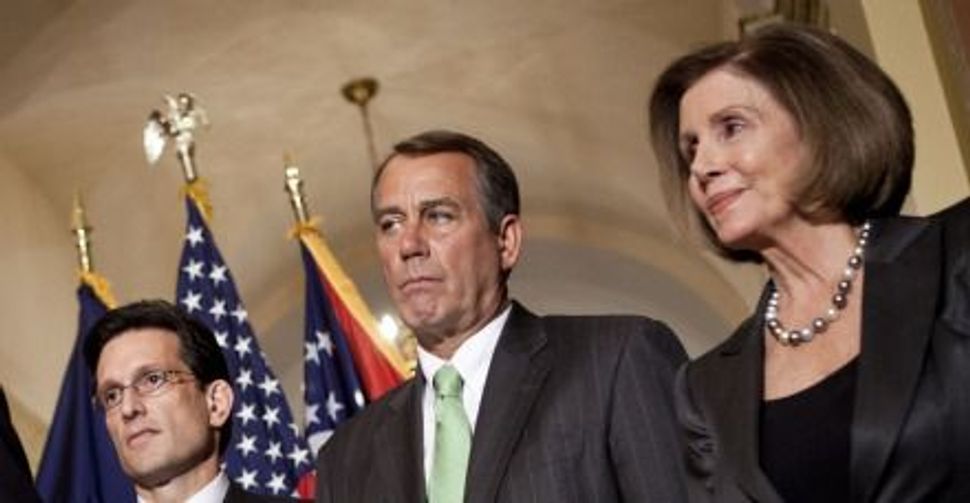 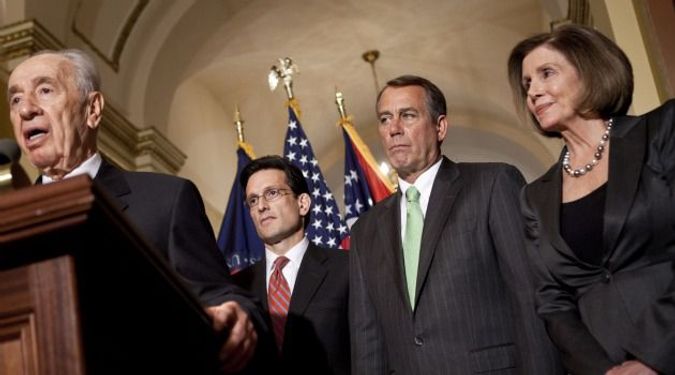 Too Pro-Israel?: Congressional leaders from both parties are pushing to punish the Palestinians over their push for statehood. But even Israel and its closest allies say that would be counter-productive. Image by Getty images

A congressional drive to punish the Palestinian Authority for its statehood bid by cutting American aid is being greeted with enthusiasm by lawmakers of both parties.

But the White House is giving the move a cold shoulder, and even Israel itself and its strongest supporters have serious reservations.

The legislation being discussed in Congress would cut all or part of the nearly $600 million annual aid package if Palestinians move ahead with their plan to seek statehood at the United Nations.

Lawmakers on both sides of the political aisle are falling over one another to show their support for Israel. Most observers, however, believe the move is more about political grandstanding than serious policymaking.

“Everybody knows the U.S. Congress is the most pro-Israel parliamentary body in the world,” former president Bill Clinton told ABC News. “They don’t have to demonstrate that.”

In a remarkable incident, The New York Times reported that the White House even turned to Israeli Prime Minister Benjamin Netanyahu to help keep aid flowing to the Palestinians.

Netanyahu, described by the newspaper as a “singularly influential lobbyist,” recently interceded with one pro-Israel representative to convince Congress to complete a $50 million aid transfer to the Palestinian Authority, the Times reported.

Some supporters of Israel agree on the need to threaten, and possibly penalize, the Palestinians for taking a unilateral route on their quest for independence. But Israel and its most loyal backers in the United States do not believe that cutting aid is necessarily the most productive move.

“Give this a few weeks, and wait and see what Abbas does,” Elliott Abrams, the former top George W. Bush administration Middle East official known for his strong support of Israel, urged Congress during a September 14 hearing on the issue at the House Foreign Affairs Committee. Abrams warned that some cuts could actually harm American interests in the region. He called on lawmakers to “keep some powder dry.”

In letters and proposed resolutions, Republicans and Democrats in both chambers have tried to link aid to the P.A. to the outcome of the Palestinians’ actions in the U.N. Congress has the power to insert limitations into foreign aid bills relating to the P.A. and can vote against assistance to the P.A. altogether.

Most American aid to the Palestinians is still in the form of funding of international projects handled by nongovernmental organizations. A portion of the aid goes directly to the Palestinian government for paying salaries for its nearly 150,000 employees and for funding the American-led program to reform Palestinian security forces.

Administration officials and outside observers have praised this program as an effective tool in restoring law and order in the West Bank and for increasing cooperation with Israeli forces.

Israel and its supporters have been lobbying forcefully for a strong congressional voice against a Palestinian declaration of statehood. But when presented with the specifics of congressional action against the Palestinians, Israeli officials expressed some reservation.

A senior Israeli diplomat, speaking on condition of anonymity, said that aid to the Palestinians should be controlled, not eliminated. He suggested that an aid cut-off could have major unanticipated repercussions.

“It is important to send a message, but we don’t want the Palestinian Authority to collapse,” the diplomat said.

Even the American Israel Public Affairs Committee, which normally marches in lockstep with the Netanyahu government, aimed to send an uncharacteristically nuanced message to Capitol Hill.

AIPAC said it supports efforts to scrutinize American aid to Palestinians, while stopping short of endorsing a cut-off. Ari Goldberg, AIPAC’s spokesman, said the situation is currently “too fluid” to make a final call on the issue.

Speaking at the congressional hearing, Middle East expert David Makovsky noted that cutting off aid might end American-funded Palestinian security sector reform. This has boosted counter-terror cooperation between Israelis and Palestinians on the ground.

“If Palestinian security officials engaged in this security cooperation go unpaid, the risk of terror attacks against Israel will grow,” said Makovsky, director of the Project on the Middle East Peace Process at the Washington Institute for Near East Policy, a think tank known as being supportive of Israel. “So who pays the price for such a cut-off? Let us not kid ourselves. We know what the consequences will be.”

Jewish groups from left and center also pronounced their unease with the call to cut aid to the Palestinian Authority. J Street and Americans for Peace Now both expressed their opposition to the move.

More of a surprise was the stance taken by The Israel Project, a centrist pro-Israel organization. “The security cooperation, which is largely funded and supported by America, needs to continue if we want to see the progress in reducing terrorism continue,” said Jennifer Laszlo Mizrah, the group’s founder and president.

The proposed congressional legislation may have provided the Obama administration with some leverage over the Palestinian leadership, and officials have raised the threat in talks with their Palestinian counterparts.

Congressional staffers said the administration has thus far “provided very little input” to lawmakers on the aid cut-off measure and speculated that the White House will step in and try to stop or modify the legislation only after it becomes clear what comes out of the Palestinian U.N. move.

Cutting American aid to the P.A. would deprive the Mahmoud Abbas government of its largest source of foreign support.

It might lead the Palestinians to turn elsewhere for help. Saudi Arabia announced on September 19 that it would be willing to provide the P.A. with $200 million in immediate assistance if the statehood bid leads the United States to halt aid.

But Ghaith al-Omari, executive director of the American Task Force on Palestine, said there is no real substitute for American assistance. “The good thing about American money is that it is predictable. They pledge it, they give it,” al-Omari said, “Arab funding has not been reliable so far.”

A congressional move against funding could also embolden Israel to halt the transfer of funds to the P.A. These funds are in fact tax revenue that Israel collects for the P.A. and is obliged to pass on, but the Israeli government has already hinted that it could hold them if statehood is declared.

Deputy Foreign Minister Danny Ayalon warned, in a September 18 meeting of nations donating to the P.A., that “future assistance and cooperation could be severely and irreparably compromised” if Palestinians move forward with their bid, which, according to Ayalon, would contradict “all signed agreements which also regulate existing economic relations between Israel and the Palestinian Authority.”

If Congress decides against cutting aid, it still has other options for expressing displeasure with the statehood bid.

A group of 25 Republicans tried to go one step further by introducing a bill supporting Israel’s right to annex the West Bank if the Palestinians follow through on statehood. That idea has failed to gain traction in Israel itself, since it would lead to an open-ended occupation and presumably force Israel to give some voting rights to the Palestinians living there.

Congress could also seek to change the terms of assistance to the Palestinians in a way that would require President Obama to come to Congress and explain every instance of funding for Palestinians. This move, during an election year in which Israel is looming as a wedge issue, could cost Obama significant political capital.

Lawmakers could also downgrade the Palestinians’ office in Washington, which has only recently obtained the privilege of flying a Palestinian flag. Such action would be merely symbolic, but it would help convey to Palestinians just how strongly the U.S. Congress feels about the statehood bid.

Congress Moves To Punish Palestinians, But Even Israel Objects