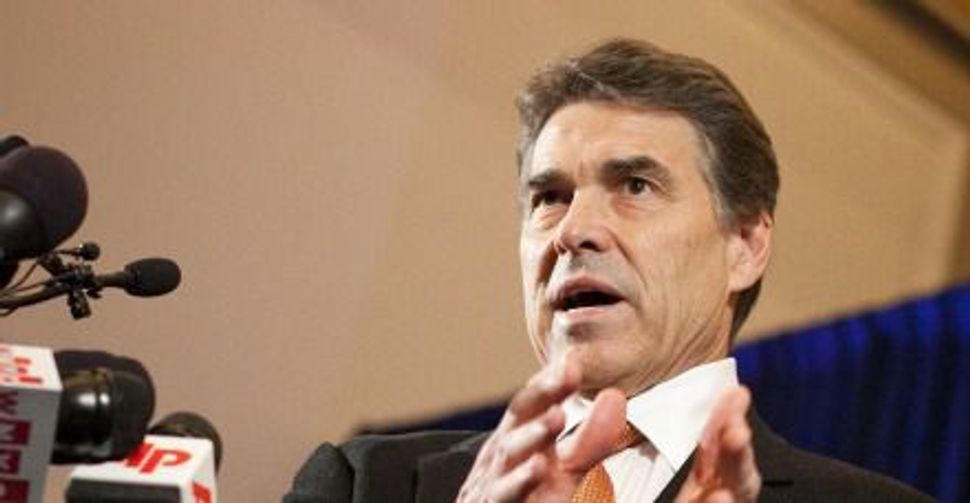 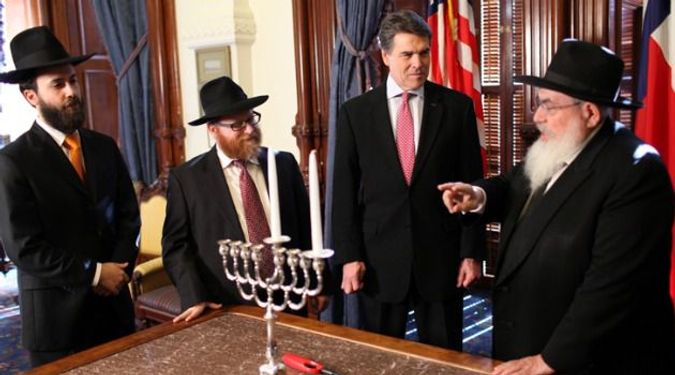 Gang?s All Here: Texas Gov. Rick Perry meets with Orthodox rabbis at a 2010 menorah-lighting ceremony in Austin. Image by State of Texas

It could have been an awkward moment even for a seasoned politician like Texas Governor Rick Perry. Surrounded by a group of Orthodox rabbis in black hats and black suits during a Hanukkah ceremony at the Texas State Capitol, Perry, now a leading contender for the Republican presidential nomination, was swept into a hora dance, holding hands with the Jewish leaders as they surrounded the lighted menorah. But Perry did not seem to mind. “That was a real ‘Dancing With the Stars,’” he said jokingly.

Perry, who wears his Christian beliefs on his sleeve, had been making friends in the Orthodox Jewish community even before entering the presidential race. Now he has intensified these efforts, winning early support from the activists on the conservative end of the Jewish political spectrum.

In fact, Perry’s Jewish backers are mainly Orthodox. And in attitude, many resemble the type of voters that caused a political sensation in August by helping to hand New York’s 9th Congressional District over to the Republican Party. For these Jewish voters, the charismatic governor’s alignment with Israel’s right wing and his conservative values make him an ideal candidate.

“He’s not one of those who call themselves friends of Israel but view that as an excuse to twist Israel’s arm,” said Jeff Ballabon, a media executive and public relations expert who was a major player in helping then president George W. Bush make inroads to the Orthodox Jewish community. “He recognizes that Israel exists under constant pressure and that true friendship is to give Israel support while it navigates its way to peace. That’s a worldview with which I am comfortable.”

Many of these backers are also distinguished by their strong support not just for Israel, but also for Israel’s settlements on the occupied West Bank, and by their opposition to territorial compromise on that land with the Palestinians.

In a September 20 New York press conference, Perry, flanked by rabbis and mostly Orthodox Jewish leaders, attacked the administration for its policy of “appeasement” that encouraged the Palestinian move for statehood at the United Nations. Perry went on to vow his support for a united Jerusalem and rejected the idea of a freeze on building in West Bank settlements. Joining Perry at the event was Danny Danon, a Likud lawmaker who has called for the annexation of the West Bank by Israel if the Palestinians move forward with their bid for statehood.

The gallery of Jewish leaders surrounding Perry at the event provided a glimpse into his support within the community. Standing just next to Perry was Joseph Frager, a New York physician and the chairman of American Friends of Ateret Cohanim, a group that buys lands and homes in mostly Palestinian East Jerusalem, evicts the Arabs residents and moves Jews into these spaces. “He has strong views on Israel that are in line with my views, to a great extent,” Frager said. He praised the Texas candidate for being a “straight shooter” and said that while he did not discuss the issue of Ateret Cohanim with the governor directly, “my guess is that he will understand and support the purchase of homes in the Old City of Jerusalem.”

Frager, organizer of an annual Central Park concert for Israel, laid out his vision for the State of Israel at this year’s event, saying: “Not one inch of the land should be given to anyone. It’s our land.”

Frager, with Dr. Paul Brody, another Jewish backer of Perry, had planned to hold a Jewish fundraiser for the candidate in New York, but he postponed the event for logistical reasons. The two were previously active supporters of Mike Huckabee but switched to Perry after the former Arkansas governor dropped out of the Republican race. For Jewish voters, Perry and Huckabee represent a similar ideology, one that, among other things, stresses support for Israel’s right to continue to expand its West Bank settlements. This is coupled with a conservative set of values that includes opposition to abortion rights, rejection of same-sex marriage and questioning of the Theory of Evolution.

“Religious Jews don’t believe in evolution, so I have no problem with a religious Christian who doesn’t believe in it,” said Frager, a gastroenterologist who received his medical degree from the University of Pennsylvania School of Medicine.

Perry’s strong convictions regarding Israel are in part a product of his visits to the country, two of which were organized and funded by Rabbi Irwin Katsof, a Jewish activist and businessman from New York and a former fundraiser for Aish HaTorah, a network of yeshivas in Israel and the Diaspora that strongly opposes territorial compromise with the Palestinians on the West Bank. During Perry’s November 2009 visit, the governor was presented by Katsof with the Defender of Jerusalem Award, a private foundation award given to foreign dignitaries deemed as supportive of Israel.

Katsof’s activism on Israel combines his business and his philanthropic activity. As an investor and funder he has forged business alliances between Israeli companies and firms in the United States and in Eastern Europe. Katsof is also the director of America’s Voices in Israel, a program that brings radio pundits and entertainers to broadcast from Israel, and the founder of Honest Reporting, a watchdog organization aimed at fighting anti-Israel media bias. Katsof, who lives in the Hasidic enclave of Monsey, N.Y., has brought many Republican politicians to Israel throughout the years and assisted them in forging ties with Israeli officials and local business leaders.

While there are no specific polling numbers regarding Perry’s support among potential Jewish voters, a recent survey, published September 26 by the American Jewish Committee, indicates that the Texas governor might not be the most attractive candidate for Jewish voters. Paired against President Obama, Perry, according to the AJC poll, would win only 25% of the Jewish vote, less than former Massachusetts governor Mitt Romney, who could gain 32%. Michele Bachmann, the poll suggests, would win only 19%.

The stronger Jewish preference for Romney could be a sign of Jewish unease with candidates who emphasize their religion and its influence on their views, as Perry and Bachmann often do. Perry, as governor of Texas, recently hosted a massive evangelical prayer event at Houston’s Reliant Stadium. He also speaks of his fundamental Christian beliefs on the campaign trail.

“It didn’t bother me at all,” said Dov Hikind, a Democratic New York State assemblyman who is Orthodox and also a strong supporter of West Bank settlements. “Could there be a candidate whose religious views are so overwhelming that I’d not support him? Of course. But I don’t think Perry is such a candidate.” Hikind participated in Perry’s press conference but has not endorsed him.

“Orthodox Jews are less uncomfortable with other people’s expression of faith,” added Ballabon, who explained that in the Orthodox community, talk about prayer and religious beliefs “doesn’t scare people.”

And Perry, as it turns out, isn’t scared of religion, even when it involves intervening to allow the placing of giant Jewish mezuza on Texas condominium doorframes. Perry recently signed a law overriding restrictions on the dimensions of mezuzas and allowing the ritual symbol to reach a truly Texas size of 25 inches. A quick entrepreneur already began marketing a huge “Rick Perry Mezuzah” honoring the governor for taking on the issue.