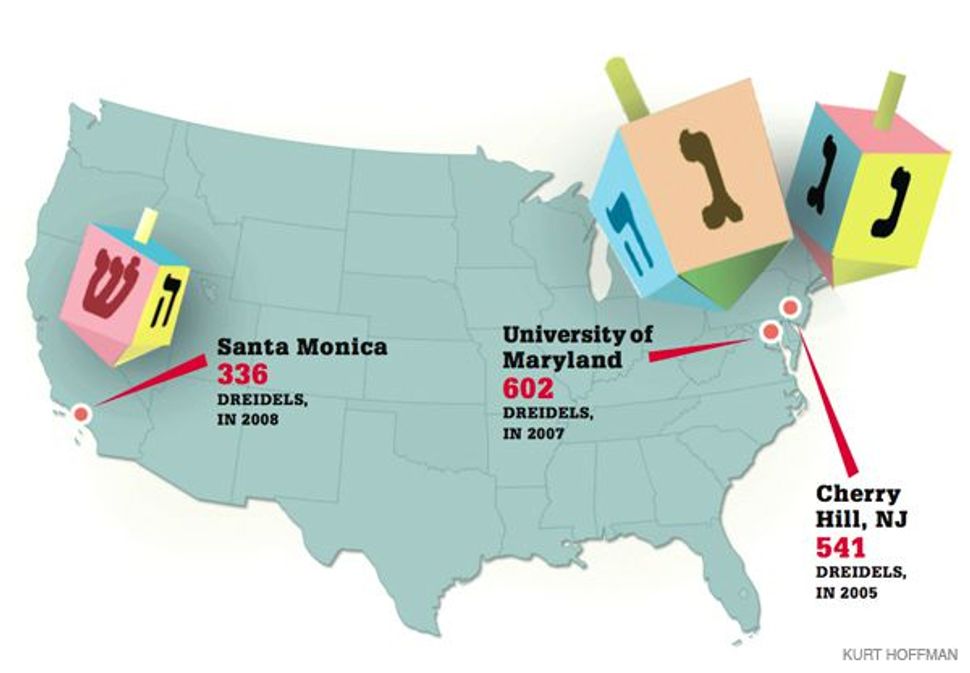 It was the opposite of the “No Spin Zone.”

On December 22, hundreds of southern California Hanukkah enthusiasts converged on Santa Monica’s Third Street Promenade in a mass attempt to break one of the few world records Michael Phelps left standing in 2008: the distinction of spinning the most dreidels simultaneously. Enlisted by Sha’arei Am — The Santa Monica Synagogue, the gathered group hoped to break the 541-dreidel mark established by Temple Emanuel in Cherry Hill, N.J., in 2005, and noted in the Guinness Book of World Records.

But like a dreidel player constantly landing on the Hebrew letter Shin, the evening’s efforts were doomed to disappointment, with an insufficient 336 spinners turning out to make Hanukkah history. Regardless of numbers, the event itself could be considered a “Hanukkah miracle,” event volunteer Bob Rubin told the Web site, doing a little spinning of his own before the kind that involved dreidels got started.

Even if the hoped-for 542 dreidels had been spun, the Hanukkah-themed record remains a source of some debate. Sports Illustrated, of all places, reported in December 2007 that 602 students at the University of Maryland had gathered for a synchronized “spin-off,” topping efforts by rivals at Indiana University and the University of Michigan. And in 2003, the Forward reported that 713 dreidels were spun by students and community members at the Helene G. Simon Hillel Center at Indiana University. 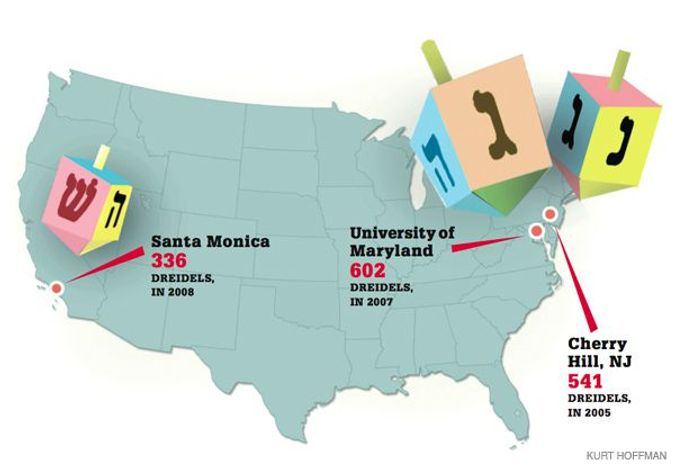 Despite their recent setback, dreidel players in Santa Monica can claim a Hanukkah distinction more likely to stand the test of time than any single spinning contest. The beachside city served as the geographical muse for “(I’m Spending) Hanukkah in Santa Monica,” a typically goofy Tom Lehrer number in which the singer describes “wearing sandals/ lighting candles/ by the sea,” before moving on to equally dubious rhymes about “shavuos in east St. Louis” and “Yom Kippa way down in Mississippa.”