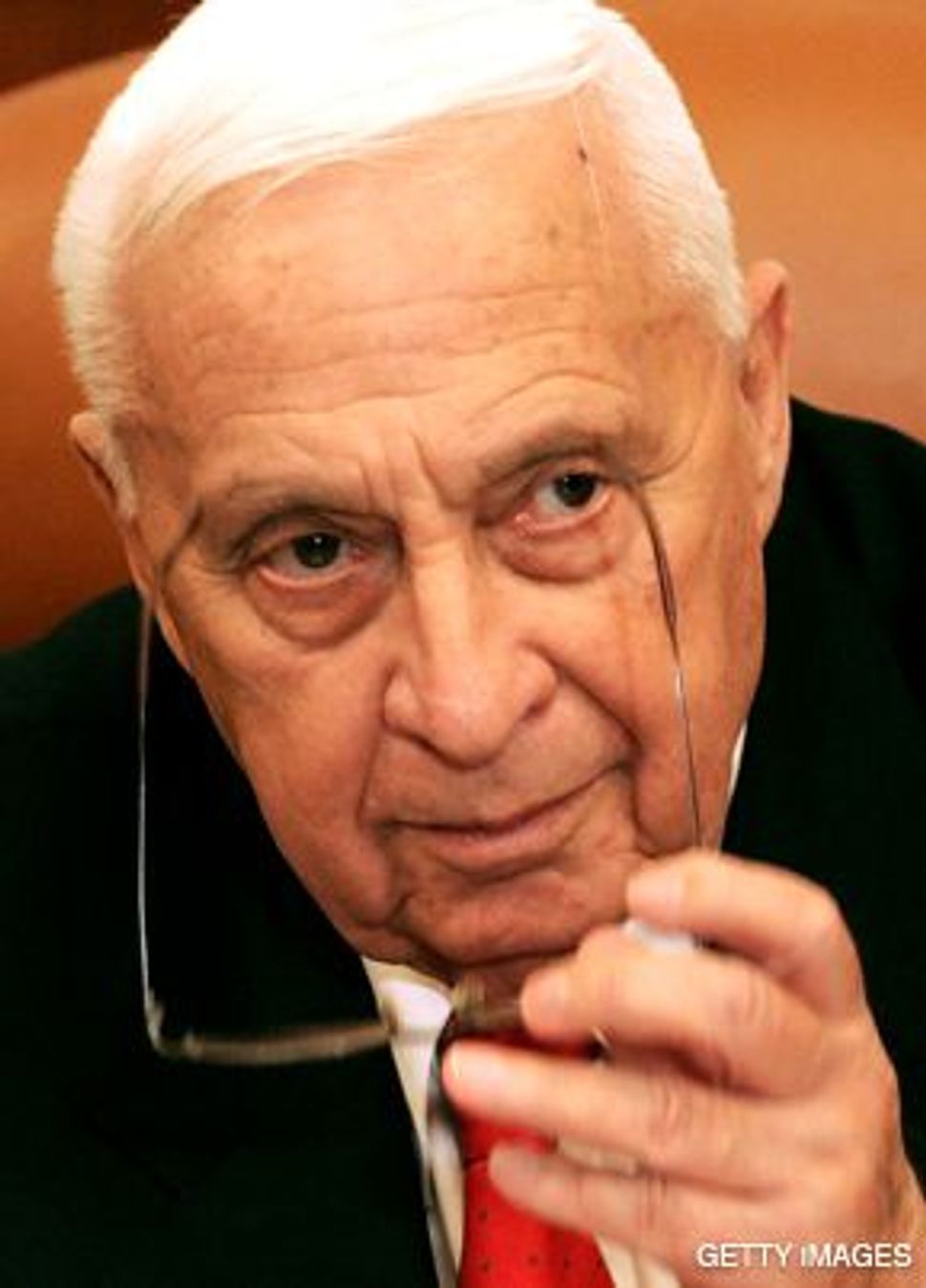 HIS LEGACY: Though comatose from a stroke, Ariel Sharon, pictured the day he was struck down, is still leaving his mark.

Tel Aviv, Israel — As Israel gears up for its February 10 general election, the man who shaped today’s political landscape perhaps more than any other person enters his fourth year in a comatose state. 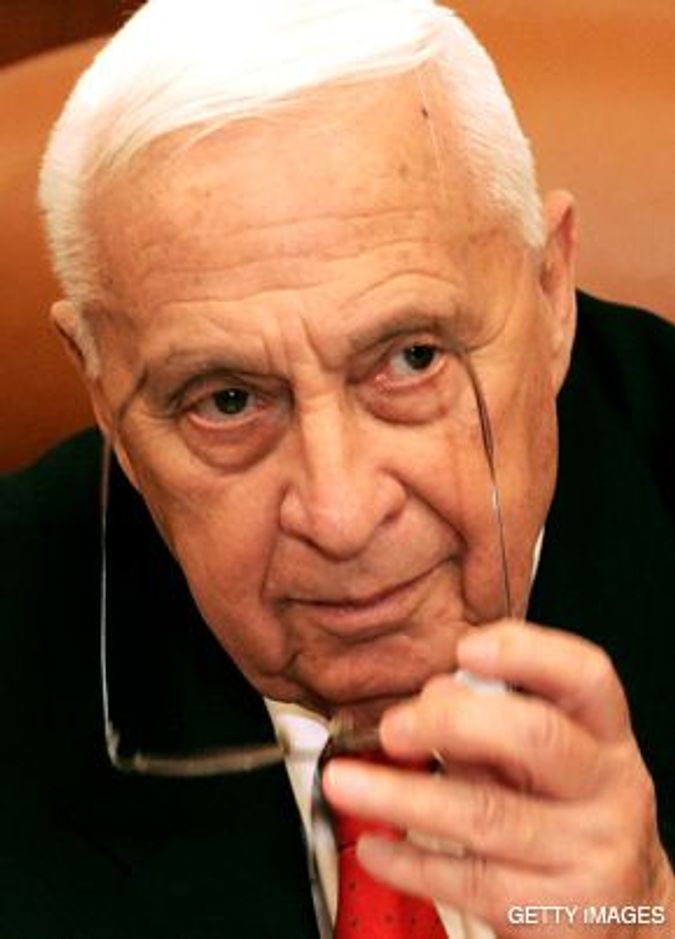 HIS LEGACY: Though comatose from a stroke, Ariel Sharon, pictured the day he was struck down, is still leaving his mark.

Ariel Sharon’s term as prime minister ended suddenly on January 4, 2006, when he suffered a hemorrhagic stroke that put him in a coma.

Today, he lies in a long-term care facility at the Sheba Medical Centre near Tel Aviv. He relies on machines to help him breathe, and is in a similar condition to when he entered the unit on November 6, 2006, a medical center spokeswoman told the Forward.

Nevertheless, his shadow looms large over this election.

“The political map today is unrecognizable compared to what it was before Sharon — in a sense it is Sharon’s map,” said Yossi Klein Halevi, a senior fellow at the Adelson Institute for Strategic Studies at Jerusalem’s Shalem Center. “You just need to look — you have a Likud that has said it is not going to build new settlements and a Labor that is cautious in relation to negotiations with the Palestinians.”

Israel’s complicated relationship with Gaza, which has dominated the national agenda in recent weeks, was, of course, shaped by Sharon. It was Sharon who, in 2005, pushed through the unilateral withdrawal from Gaza. His determination to do so was the main reason he left his longtime political home, the right-wing Likud, to set up the centrist Kadima party.

Sharon also helped shape the career of the woman who took over from Olmert as Kadima leader. He is widely credited with transforming Tzipi Livni from a staunch rightist, from a Revisionist Zionist family, to a centrist committed to a negotiated settlement with the Palestinians.

First elected to the Knesset in 1999, Livni was appointed regional cooperation minister just two years later by Sharon. He continued to promote her and eventually made her justice minister, then foreign minister. These posts gave Livni the exposure that led to her rise within the party.

Indeed, Sharon has been uniquely influential in the party he set up. Unlike Israel’s established parties, which are heirs to longstanding traditions in Zionist thought, Kadima was founded by Sharon to advocate what he regarded as a pragmatic platform for the present.

“Sharon, in the last days of his political career, formed some kind of consensus that Israel must evacuate territory,” said Bar-Ilan University political scientist Shlomo Egoz. “It was a departure from the Greater Israel approach which he did believe in, and the land for peace approach — he was not a great believer in negotiation or partners for peace.”

Sharon’s approach, instead of negotiated settlement, was unilateral action, as in the 2005 Gaza withdrawal. He did not make the withdrawal subject to any conditions on the Palestinian side.

“He didn’t believe Israel had a partner, but he thought that Israel needed to leave Gaza for its own security concerns — this was key to his outlook,” said Hebrew University political scientist Yaron Ezrahi.

There were strong echoes of that ethos of unilateralism in the way that Operation Cast Lead was brought to a close.

Sharon had expected the Gaza border to be calm not as the result of an agreement with the Palestinians, which he viewed with suspicion, but because of the deterrent effect of Israel’s military might.

At the end of Operation Cast Lead, while Defense Minister and Labor Party leader Ehud Barak reportedly favored a negotiated cease-fire, Livni favored unilaterally bringing fighting to an end. The objective of the operation was to “achieve deterrence,” she told a press conference on January 11. Ending it with agreements would mean, she said, that “the whole outcome would be problematic.”

“I am not looking for agreements with Hamas,” she said. “If they do fire, we’ll do this again, and big time. This is what we’re capable of, and this is the way to fight terror.”

Livni’s stance was unsurprising.She is, as Egoz put it, “Sharon’s most conservative follower.”

The change since 2005, however, is that the unilateralist outlook was popular then, while today it is tarnished — even if Sharon is widely remembered with fondness. Sharon’s unilateralism came into its own after the public became disillusioned with both the pro-settlement Greater Israel approach and land for peace.

“Now,” Egoz said, “the public increasingly tends to feel that unilateral withdrawal did not work either, seeing the kidnappings of 2006, Hamas coming to power, and the latest operation in Gaza as evidence.”

While the Israeli public may have soured on the concept of unilateral withdrawal, what has stuck is the change Sharon effected in attitudes toward the settlements.

“His radical change from being the person who supported and built the settlements to seeing them as a burden on security, diplomacy and security had a major effect on the way the public came to view the settlements,” Ezrahi said. “He provided a massive boost for the marginalization of the settlers from normative Israel.”

There is a sense that the election will be a kind of referendum on Kadima and the unilateralism it has become known for — and which Sharon pioneered. Recent polls show Kadima consistently trailing Likud.

Today, Sharon’s sons, Omri and Gilad, zealously defend his legacy against claims that the Gaza disengagement was a failure. In the thick of Operation Cast Lead, Gilad Sharon dismissed suggestions that the rocket fire on southern Israel meant that his father had been wrong to disengage.

He said that while many in Israel claim that the disengagement put lives in southern communities in danger, actually “the lives of hundreds of Israelis were saved.” This is because, he said, of the lives of settlers and soldiers that would have been lost in Palestinian attacks in Gaza if the occupation had continued.

The loyalty of Sharon’s sons to their father manifests itself most clearly, however, in more private settings. Omri and Gilad go most days to visit their father, and they become immensely irritated when people ask why they insist on keeping life support machines switched on.

“They hope,” said Israel Maimon, Sharon’s former Cabinet secretary and a family friend. “They know the situation but they always keep hope.”