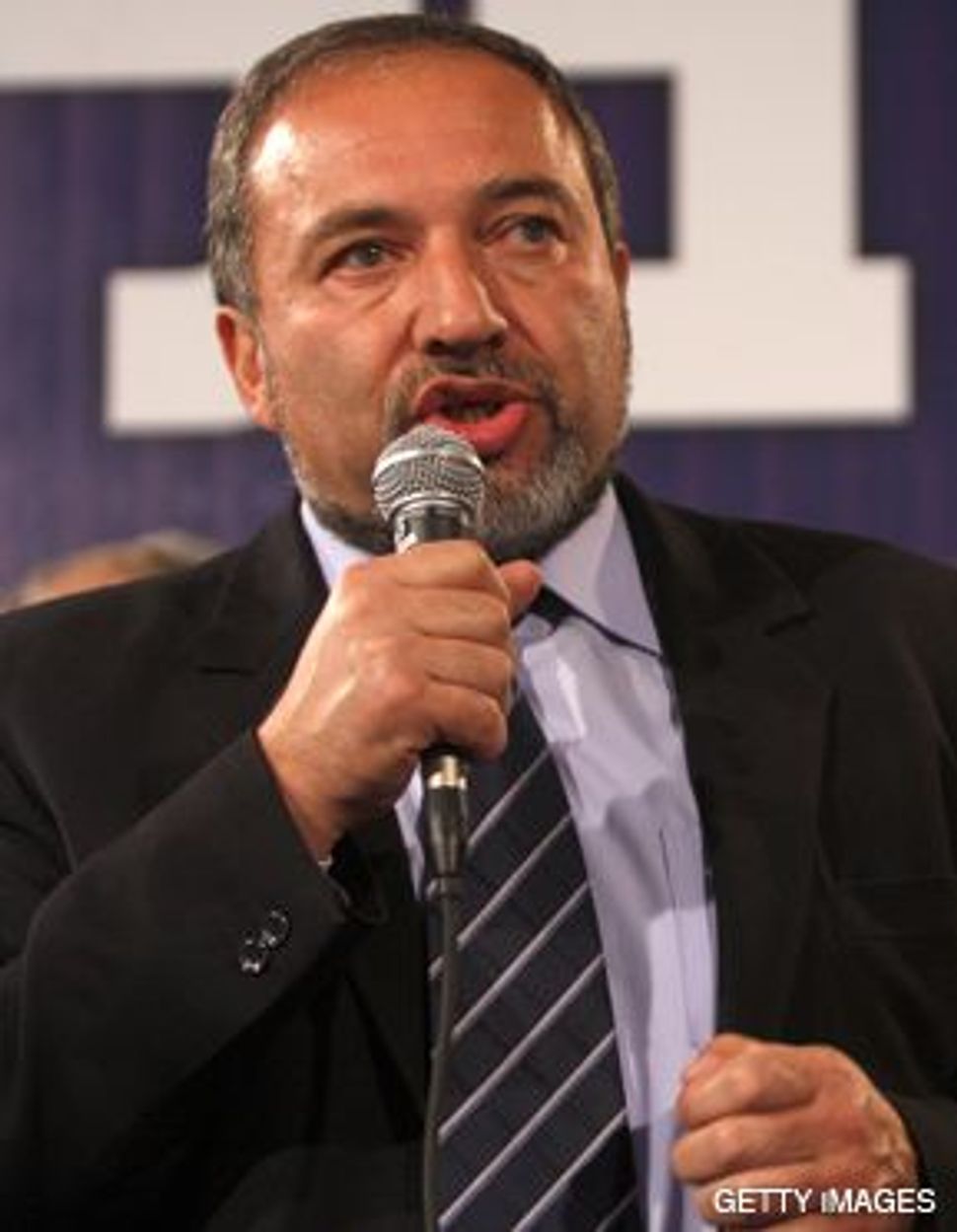 Haifa, Israel — Tzipi Livni’s Kadima party and Benjamin Netanyahu’s Likud party may be vying for victory in the election, but a former nightclub bouncer, famed for his verbal attacks on Arabs, made the most dramatic political gain. 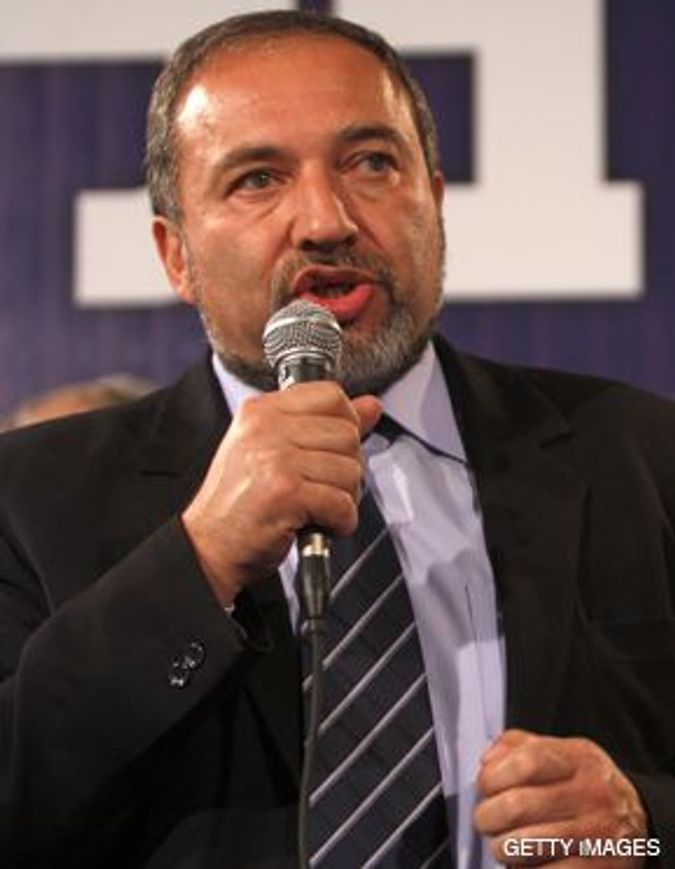 Avigdor Lieberman’s Yisrael Beiteinu party, now the third largest in the Knesset, regards Israel’s Arabs as a dangerous fifth column and wants them — together with all other Israeli citizens — to have to declare loyalty to the state. But the party also champions its own version of a two-state solution that is hardly the traditionally preferred platform of the hard right in Israel.

The reaction of Israeli Arabs to Lieberman’s ascension is fury. “The only difference between Lieberman and [the late Austrian politician Jörg] Haider and [the French politician Jean-Marie] Le Pen is that they were against immigrants, while Lieberman is an immigrant inciting against the natives,” Tifah Abbad El-Halim, spokeswoman for Arab lawmaker Ahmed Tibi, who leads the Arab nationalist party Ta’al, told the Forward.

The Jewish left in Israel has reacted to the rise of Lieberman with similar dismay.

Until recently, Beiteinu was seen as a niche party for the Russian-speaking community, proposing policies that failed to resonate either with Sabras or with Western-born Israelis. Since the military assault in Gaza, however, Beiteinu’s ratings in the opinion polls rocketed, and in the Knesset vote it secured an apparent 15 seats, making it the third-biggest party. Between one-third and one-half of Beiteinu voters in this election are thought not to have been Russian.

Pollsters believe that even this does not show the full extent of the party’s increased appeal. This is because many Beiteinu supporters are thought to have voted Likud after that party’s chairman, Netanyahu, urged them to do so to keep out Kadima. He cajoled them with a promise that Lieberman will get a plum job in his coalition.

In the run-up to this election, Beiteinu worked hard to popularize its image, recruiting supporters that gave it credibility outside its traditional Russian-speaking constituency, such as former Knesset minister Uzi Landau, who defected from Likud, and Danny Ayalon, former ambassador to America. And it recruited people to mobilize the Russian speakers, including former beauty queen of St. Petersburg Anastasia Michaeli, now host of a lifestyle show on Israel’s Russian TV channel.

“The party has matured and grown up,” Ayalon told the Forward.

Its appeal, he said, is “no nonsense, no euphemisms and sometimes no political correctness.” But he insists that dispensing with political correctness when talking about Israeli Arabs does not mean the party is racist. “People call us these names because they can’t respond to our points,” he said.

Ayalon said that the loyalty pledge is “across the board” and not just for Arabs, and said that only “minimal loyalty” is demanded: “It’s just not calling for the destruction of the state. Is that so unreasonable?”

Beiteinu’s “No Citizenship Without Loyalty” campaign proposes that Israeli citizenship should be conditional on a declaration of loyalty to Israel as a Jewish state. Accusations of disloyalty among Israeli Arabs were the rationale behind the party’s successful move in January to get the Knesset to ban the two main Arab parties from running in the election — a move that the Supreme Court later overruled.

But in one respect, Beiteinu slays a sacred cow of the Israeli right — that being a hawk means opposing the establishment of a Palestinian state. In fact, the party is probably more enthusiastic than most Palestinians about Palestinian statehood.

It claims that this redrawing of borders would solve Israel’s security problems — given the party’s view of Israeli Arabs as the enemy within — as well its economic and demographic worries. The concept was outlined most famously in the 2004’s The Lieberman Plan.

The most vocal group in the nationalist right in recent years has been religious Zionists, whose stance is “negated” in Beiteinu’s platform, according to David Newman, a Ben Gurion University political geographer and authority on the religious-Zionist right. “Land [for Beiteinu] is not sacred, but a strategic asset,” he said. “The demographic issue is much more central than the territorial issue.”

Beiteinu wants to increase the Jewish majority in Israel by reducing the Arab minority — and by boosting Jewish immigration. This is a popular platform, given that the party’s traditional supporters are, like Lieberman himself, immigrants. The party fights hard on issues important to former Soviet bloc immigrants, such as the institution of civil marriage for the benefit of the thousands of them who were eligible for aliyah under the law of return but cannot marry in Israel, as they are not Jewish according to religious law.

Israel is famously a country where ideas that start on the political fringes eventually become mainstream. This was true of the concept of land for peace, unilateral withdrawal from Gaza and, most recently, the division of Jerusalem, which is now becoming less of a taboo than it was. The question raised by Beiteinu’s success is whether its proposal for redrawing the map will come with the party getting off the political sidelines and entering the mainstream political discourse.

“It will stay on the fringes,” predicted Gabriel Ben-Dor, a political scientist and specialist on the peace process at Haifa University. He views the plan as “naïve,” as some of the unsettled land that Lieberman wants to transfer to a Palestinian state is earmarked for future population and industrial growth. Most important, he said, “taking territory away from the pre-1967 border of Israel will open up a can of worms and be something that the majority of Israelis will not accept.”

Koren disagrees, predicting that “it may be taken seriously.” He said, “If the two-state solution is on the table in a serious way, this could become one of the items for discussion.”

On the Palestinian side, Ramallah-based analyst Sam Bahour voiced a similar view. While he told the Forward that he deems Beiteinu “racist and fascist,” he said, “Any plan can become serious if there is proper will on each side.”

Koren believes that while Beiteinu’s success is being billed as a swing to the right, the peace process will progress more easily with a coalition including Beiteinu than one with Shas or religious-Zionist factions, which are strongly opposed to territorial compromise. Beiteinu may prove “not to be a stumbling block to the peace process,” he added.