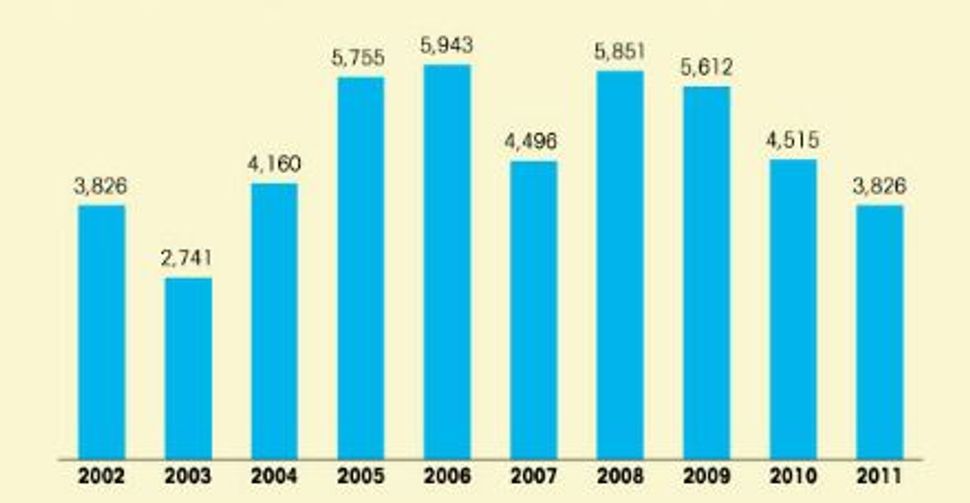 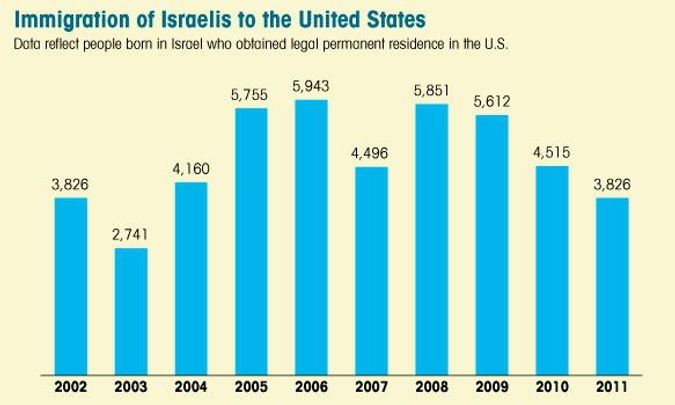 The various laws of return seem to be working. Fewer Israelis are moving to the United States while a growing number of American Jews are immigrating to the Jewish state and more Israelis living abroad are making their way back home, new immigration statistics show.

The numbers seem to herald a victory for Israel, which has taken bold steps to keep its citizens from moving away. But the immigration data may be more indicative of America’s economic woes than of Israel’s growing attractiveness.

Immigration statistics published in April by the U.S. Citizen and Immigration Services (USCIS), a branch of the Department of Homeland Security, indicate that the number of Israeli natives seeking to resettle in the United States has been falling. Last year the number of Israelis obtaining legal permanent residence in America was at a record low of 3,826 — down from a peak of nearly 6,000 in 2006.

A closer look at the data reveals a correlation between Israeli immigration to America and the state of America’s job market. The number of Israelis immigrating to America has been steadily declining since 2008, just as the recession set in, bringing massive layoffs and skyrocketing unemployment figures.

The economic downturn has taken its toll on immigration to America from around the world. After reaching a high of more than 1.2 million new permanent residents in 2006, the numbers have since fallen. In 2011 the United States issued 1.02 million Green Cards to new immigrants.

The past decade’s high-tech boom brought with it thousands of highly skilled workers from abroad, sponsored by Silicon Valley firms in need of professional help. These workers, including those from Israel, obtained temporary work visas, which many later used to establish a case for permanent residency and immigration. In recent years, demand for foreign workers has dropped and the quota for qualified professional visas, once filled within days, remained unmet for months.

These days, employment reasons count for only one-third of new permanent residence permits. And most Israelis moving to the United States either are married to an American citizen or have a close relative stateside, according to official U.S. statistics.

Studies conducted in Israel suggest that the United States is a preferred destination for more than 60% of Israelis wishing to leave their country. Canada, known for its welcoming immigration policies, has seen little fluctuation in the number of Israelis arriving in the past decade. Western European countries, mainly France, Germany and the United Kingdom also attract Israeli émigrés but detailed data does not exist.

Lev Ari, who studies Israeli emigration patterns, does not think that recent trends will have long-term effects on Israelis’ relocation tendencies. After all, studies show that Israelis living abroad are motivated by a drive to improve their financial situation and to find better employment opportunities. She surmises that once the American economy regains momentum Israelis will be in line for visas at the U.S. embassy once again.

According to the USCIS, more than 47,000 Israeli natives have received Green Cards in the past decade. Israeli estimates put the number of citizens living abroad anywhere between 550,000 and nearly 1 million.

The U.S. numbers count only those who have formally requested, and been granted, immigration status. They do not include those on temporary work visas or those living undocumented in the United States.

The issue of emigration can be a sore spot for Israelis, some of whom equate the move with the rejection of the Zionist dream. In Israel, it is common to portray those who have moved away in negative terms, often calling them “yordim,” meaning those who have descended.

A controversial ad campaign was launched in an attempt to make Israeli expatriates consider returning to Israel before their children lose touch with Jewish and Israeli culture. At the same time, Israel’s Ministry of Immigration Absorption has been offering assistance, tax breaks and support for those who return home.

Ella Saban, director of the department for returning Israelis at the Absorption Ministry, said that since launching the reabsorption effort in 2006 the number of Israelis coming back has doubled and is now in the range of 9,000 a year.

“We can clearly see the influence” of the economic situation, Saban said. “When the world went through an economic crisis in 2009, we saw more Israelis interested in returning home.”

Economic factors aside, Israeli officials also point to the increase in the number of American Jews moving to Israel. Since the economic collapse, emigration of Americans to Israel has grown incrementally and now stands at more than 3,000 new immigrants a year.