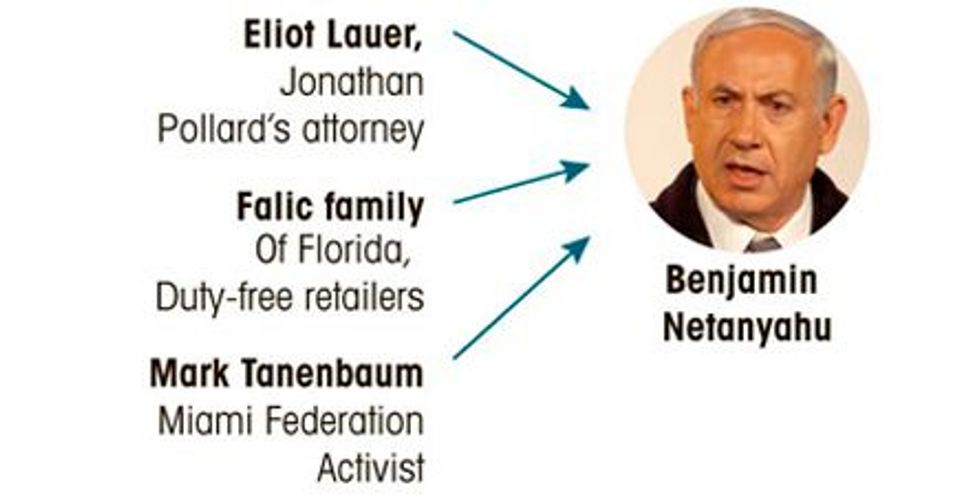 For wealthy Americans these days, appeals for political contributions from candidates, party committees and now from super PACs seem never-ending. But for wealthy American Jews involved with Israel, there is, increasingly, yet one more hand outstretched, from abroad, seeking political largesse. 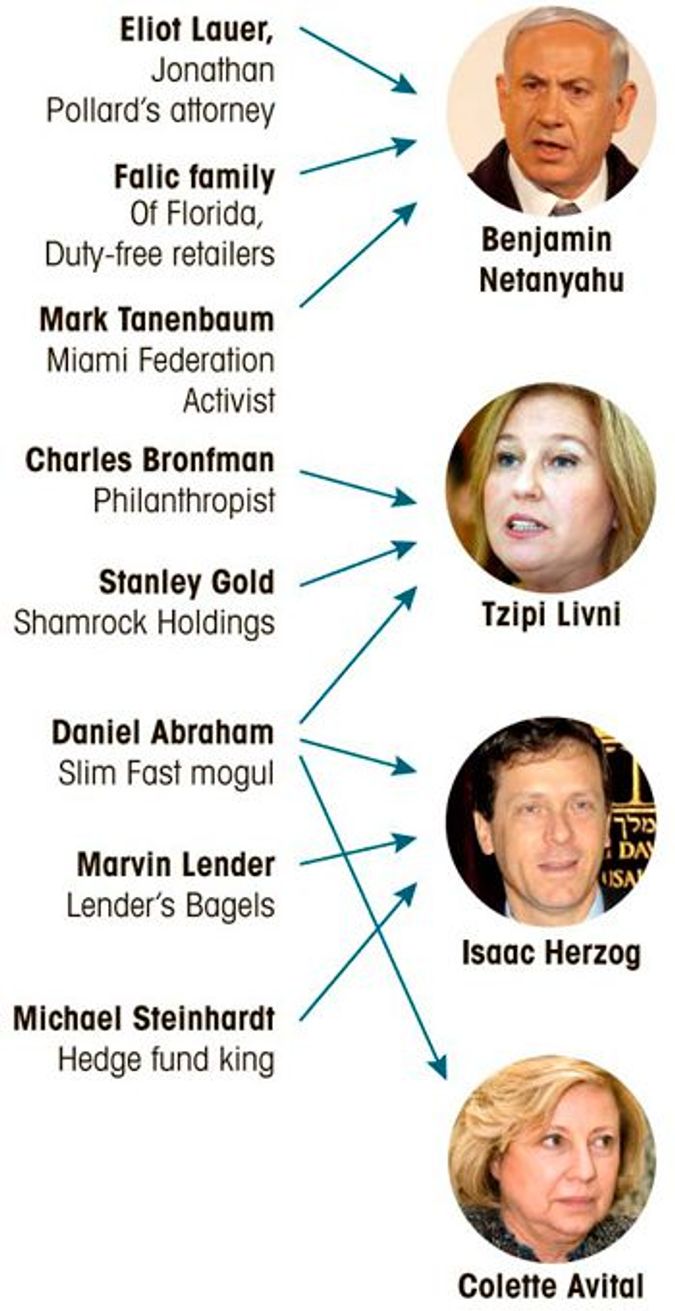 Israeli candidates, vying for seats in the Knesset, the country’s parliament, have found a reliable funding base in American Jews willing to add their dollars to the pile of shekels fueling primary races in Israel’s major political parties.

Recent primary competitions in the ruling Likud party and its new coalition partner, Kadima, have brought in more than $500,000 from American supporters trying to help out the leading candidates in each party. And while these sums may seem minor by American standards, they are significant for politicians in Israel.

“Primaries are an expensive business, and any money you can raise overseas is very important,” said Avraham Diskin, a political science professor at the Hebrew University in Jerusalem. Diskin explained that since primary elections were introduced into Israel’s political system (in the late 1970s in small parties and in the 1990s for major parties) campaign costs have been on the rise. Over time this has generated an increasing need to reach political donors. “This is way more significant than it was in the past,” Diskin said.

In primary races, however, candidates competing to win a high place on their party’s Knesset election list may raise money overseas from noncitizens so long as these donations are promptly reported to the State Comptroller. This is where close ties to deep-pocketed American Jews can make a difference. Money raised in the United States helps candidates fund primary organizing and advertising, although costly TV ads are not used in internal Israeli party contests.

Leading the pack of Israeli politicians supported by American donors is Prime Minister Benjamin Netanyahu, who in the run-up to the Likud’s January 31 primaries raised more than $300,000 in the United States. Netanyahu enjoys not only his stature as sitting prime minister, but also a strong base of support cultivated over decades of reaching out to American Jews, dating back to his tenure in New York as Israel’s ambassador to the United Nations in the mid-1980s.

Standing out among Netanyahu’s supporters in the recent primary elections cycle are members of the Florida-based Falic family, who made their fortune in the duty free retail business. Falic family members, who are active as lay leaders in Jewish groups including WIZO-USA and Friends of Israel Defense Forces, are responsible for $44,000 of Netanyahu’s war chest. Mark Tanenbaum of Miami Beach, an activist in the local Jewish federation and former member of the Tel Aviv University board of governors, and Eliot Lauer, a New York lawyer who is representing jailed Israeli spy Jonathan Pollard, are also among Netanyahu’s top U.S. donors.

The large sums raised in the United States were probably not necessary; Netanyahu easily won the Likud primary race by a 3-1 ratio. His only rival for the party’s leadership, ultra-hard-liner Moshe Feiglin, was able to raise only $20,000 from American supporters, most of them residing in Orthodox neighborhoods.

In the Kadima party, a close primary race earlier this spring between Knesset members Tzipi Livni and Shaul Mofaz sent both candidates looking for support overseas to fund their battle for leadership of what was seen at the time as Israel’s main alternative to the Netanyahu government. The elections, held on March 28, crowned Mofaz head of the party, and he quickly moved to join Netanyahu’s coalition.

Fundraising by Mofaz, who was born in Iran and came to Israel as a child, was aimed primarily at Jews of Iranian and Sephardic descent in New York and Los Angeles. Mofaz raised a total of $237,000 from American donors this year. Among his big supporters were film producer Meir Teper and members of the Merage family, who are Iranian Jewish food business millionaires.

Candidates from the Labor Party, despite the party’s shrinking role in Israel’s political map, still seem to draw a fair amount of support from American donors. Shelly Yachimovich, who won the party’s primary race in September 2011, did so without the help of overseas donors. But other candidates brought in significant donations from American supporters. Isaac Herzog, a popular politician and the son of former Israeli president Chaim Herzog, listed among his donors hedge fund manager and philanthropist Michael Steinhardt, and peace process supporters S. Daniel Abraham, Bagel bakery millionaire Marvin Lender, private equity businessman Peter Joseph and Seymour Reich, a former head of the Conference of Presidents of Major American Jewish Organizations. Herzog raised in the United States alone more than $120,000 for his 2011 primary campaign, positioning him among the party’s top spenders. Still, he was not able to make the runoff for party leadership.

Another popular name among American donors was Amram Mitzna, former mayor of Haifa, who finished last in the primary race after raising $45,000 from American Jewish supporters.

Israeli fundraising in America takes different forms, and in many cases it has to do more with personal connections than with ideology. According to an Israeli political activist who asked not to be identified, only a few candidates make a face-to-face pitch to American donors. Most will either ask friends in the United States to serve as surrogates and reach out to donors on their behalf, or will reach out to potential contributors themselves by phone. “There is no system to it,” the activist said, explaining that Israeli political campaigns do not hire fundraising specialists for reaching out to American Jewish donors.

But even without a direct pitch, American Jews know when their help is needed. “Every time an Israeli decides to run for office, he takes a trip to the U.S. to start off,” said Abraham Foxman, national director of the Anti-Defamation League. Foxman recalls attending many such meetings with visiting Israeli politicians seeking support.

Donation lists published by Israel’s State Comptroller reveal that several Jewish American donors provide funding to more than one candidate. Steinhardt has given to Labor’s Herzog and to Uzi Dayan, who ran in the Likud primary; Abraham supported Livni of Kadima while also donating to the campaigns of Labor candidates Herzog and Colette Avital, a former consul general to New York; Stanley Gold, president and CEO of Shamrock Holdings, has given to Livni and also to her party member Shlomo Molla, and Rabbi Brian Lurie, former head of San Francisco’s Jewish federation, donated to Livni and Herzog, and to Labor’s Avishay Braverman. “I admire and respect the three of them,” Lurie told the Forward in an interview.

These foreign donations to Israeli political parties and candidates have drawn negative attention over the years. In the past they were used even for national elections, thanks to legal loopholes that enabled candidates to raise foreign cash while avoiding public scrutiny. Major overseas donors have been known to bankroll Israeli leaders, from Ariel Sharon to Shimon Peres and Benjamin Netanyahu. Former Israeli prime minister Ehud Olmert is currently standing trial for allegedly receiving illegal cash donations in envelopes from New York businessman Morris Talansky.

Restrictions governing campaign donations have been tightened in recent years, however, putting limits on overseas fundraising and requiring full disclosure. “I’ve always been concerned about the possibility that one or two people will be in a position to buy Israeli elections with their donations,” Foxman said. But the new regulations, with their limits on donations and transparency requirements, have left him feeling more comfortable.

Lurie, who now serves as vice president of the New Israel Fund, said he does not see a problem with American Jews choosing to support certain candidates in Israel. “It’s part of my connection to the Jewish state,” he said. “You might say I am a citizen at large.”