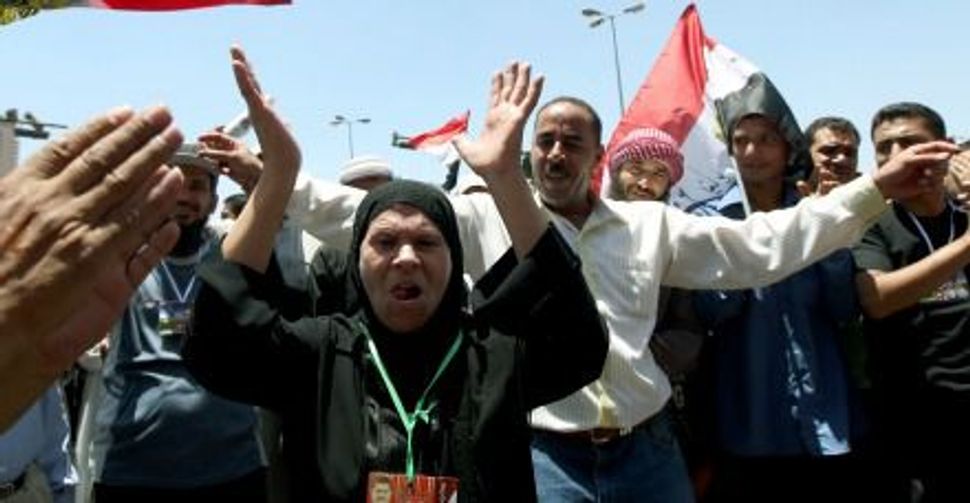 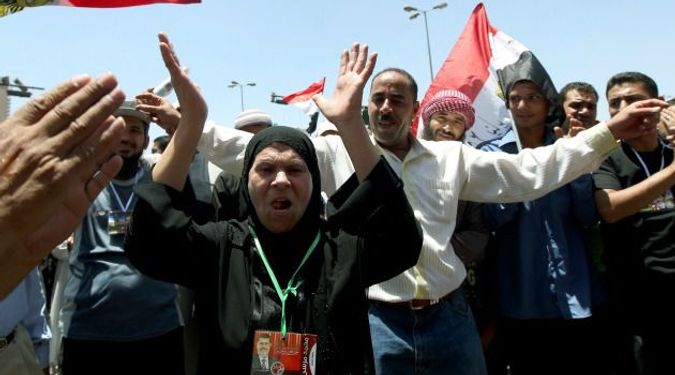 Power Grab: Egyptians protest the military?s apparent grab for power. Some U.S. leaders want to cut aid to Egypt over the crackdown, but pro-Israel advocates oppose that move. Image by getty images

In a move opposed by some Israel advocates, a key Senate power broker is threatening to reduce American military aid to Egypt in response to the recent power grab by Egypt’s military council.

Patrick Leahy of Vermont, who chairs the Senate Appropriations Committee’s panel on foreign operations, has put into question the continuation of American taxpayer dollars flowing to Egypt’s military. Leahy’s threat is opposed by the Obama administration, so far. But even the administration now seems to be looking for ways to pressure the country’s military leaders to cede power as Egypt struggles with its attempt to transition into a democracy, more than a year after a popular uprising led to the ouster of Egypt’s longtime strongman Hosni Mubarak.

In a June 15 statement, Leahy, a Democrat, voiced his distress over the Egyptian military’s recent moves to gut efforts to build democratic institutions. The senator’s office said he communicated his concerns to the State Department but has yet to hear any response. In the statement, Leahy said he “would not want to see the U.S. government write checks for contracts with Egypt’s military under the present uncertain circumstances.”

Although it did not explicitly lay out a plan to freeze funds, Leahy’s message to the administration was picked up by international press as a clear sign of American pressure on Egypt’s military council.

Like any individual senator, Leahy has the power to put a hold on the release of appropriated aid money still in the pipeline should he choose. Congressional sources said the senator would rather negotiate with the State Department and reach an agreement on using the aid as a lever to ensure the Egyptian military lives up to its commitment to transfer power.

Pro-Israel advocates, by and large, do not support such a move. They have long championed aid to Egypt from the United States not just as an Egyptian interest, but as an Israeli interest, as well. Historically, the two have been linked politically since 1980, when the United States brokered a peace treaty between Israel and Egypt. Even now, aid to Egypt is viewed as a key component in ensuring Egyptian adherence to its peace accord with Israel.

“The assumption since 1979 has been that the dependence of Egypt’s armed forces on American aid and equipment will cement the army’s support for peace with Israel,” said Steve Rosen, Washington director for the Middle East Forum and a former top official at the American Israel Public Affairs Committee. “The army was to serve as the guarantor for peace if things go wrong.”

Disappointment was on the rise in Washington as news came from Cairo confirming what some have warned about for months — that the Egyptian military would do everything in its power to delay, and possibly even overturn, the country’s shift to democracy. On June 15 the Supreme Council of the Armed Forces, the provisional authority running the country since the toppling of Mubarak, disbanded the entire parliament following a ruling of the constitutional court determining that a third of the seats won in the elections were not in order. Two days later, the military council, known as SCAF, amended Egypt’s temporary constitution in a way that would strip key responsibilities from the elected president. It also declared that it would appoint the committee that will write a new constitution for Egypt.

The military moves were seen by Egyptian and foreign observers as blunt steps to curb the power of the Muslim Brotherhood, which has emerged as the winner in recent elections.

Washington’s response to the news was mixed. The administration, while expressing concern, did not outline practical measures against the Egyptian military. In Congress, the response was harsher.

Leahy, who chairs the subcommittee that oversees foreign aid appropriations, made clear that the Egyptian military’s actions threaten the future of American military assistance to Egypt. The military’s stance, he said in his June 15 statement, “obviously throws into question the future of the transition.”

Last year, Congress passed legislation sponsored by Leahy that set conditions on aid to Egypt to ensure that the country pursued a transition to democracy. The law allows the administration to waive these conditions for national security reasons.

Aid to Egypt reached $1.3 billion this year, as Congress added to the annual military assistance another $300 million in civilian aid aimed at helping post-revolution Egypt rebuild its economy and create jobs. Pulling the plug on military aid would primarily affect the Egyptian army, but experts believe that the effect will be mainly symbolic. Most of the aid appropriated for this year has already flowed through the pipeline to Cairo, and Leahy could block only the remaining sum, which congressional sources estimate is less than half of the $1 billion military aid component.

Nevertheless, such a move would “send a very strong message that we are no longer betting on the army, which at every step has made the wrong turn,” said Eric Trager, an expert on Egypt at the Washington Institute for Near East Policy.

Strong as it might be, Trager doubted that the Egyptian military would get the message. “The military establishment doesn’t believe the U.S. will go ahead with the cut,” he said. “The only threat they see to American aid is if peace with Israel is overturned.”

An Egyptian source with close ties to the government in Cairo backed up Trager’s analysis. “Using the assistance package as a means of pressure will have zero impact on the transition. Zero impact,” said the source, who asked not to be named.

A cut in aid could also complicate Israeli and American interests, since the Muslim Brotherhood, now poised to take the presidency, has made clear in the past that any slash in assistance from the United States could lead to canceling the peace accord with Israel, because the aid was part of the peace package promised by the Americans.

Israel and its backers in the United States still feel that military aid to Egypt is important. “Israelis aren’t going around asking themselves, ‘Is Egypt democratic?’ they are asking themselves, ‘Is Egypt going to become an enemy?’” Rosen said. Aid to the military, still viewed by Israelis as the strongest force in Egypt supporting peace with Israel, is a necessity in the view of Israel and its Washington advocates, he said.

Pro-Israel lobbyists have not launched a concerted effort against attempts to stop aid to Egypt. But several activists said that it is clear to all relevant congressional offices that Israel supports the continuation of the aid.

A spokesman for AIPAC did not return calls regarding this issue.

A full-scale offensive against Leahy’s initiative may not be warranted. The idea to cut aid has been raised in the past and was blocked each time by the administration, with the backing of pro-Israel lobbyists.

Most recently, in late March, the State Department informed Congress that it would waive conditions on American aid to Egypt and go ahead with the full aid package, as allowed under the security waiver provision in the law.

This time around, the administration is taking a less Egypt-friendly approach: It is using Leahy’s statement as a stick against the Egyptian military, without coming out in favor of an aid cut. The State Department made clear in its daily press briefing that any military actions to curb Egypt’s democratic transition could affect “all aspects” of relations between the United States and Egypt. The military’s decisions and policies are “going to have an impact on the nature of our engagement with the government and with the SCAF moving forward,” State Department spokeswoman Victoria Nuland warned.