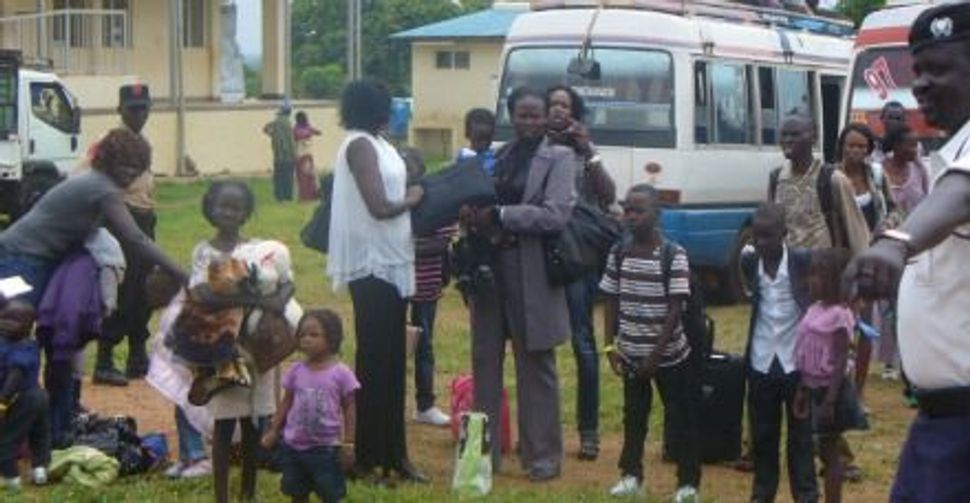 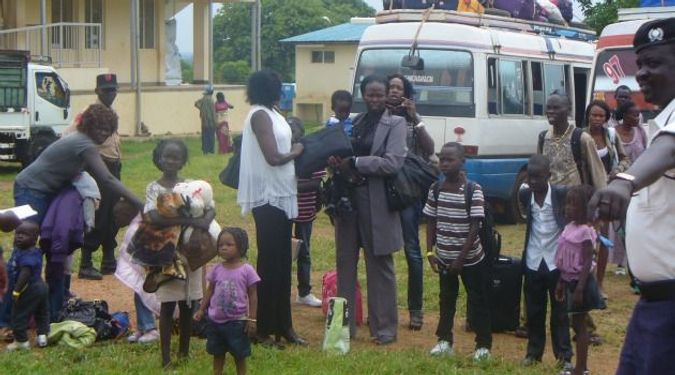 Arriving Home: South Sudanese deportees arrive at a holding camp in the capital of Juba after being forced to leave Israel. Image by tendai-ishe mbofana

For Benjamin Churi Kariyam, it’s no secret why he’s languishing in a crumbling transit camp outside the South Sudanese capital of Juba instead of working in Tel Aviv.

Like scores of other African immigrants just deported, Kariyam blames what he calls the racism of Israeli government for his plight.

“This is the reason why we are here today,” he said after rickety buses piled high with suitcases ferried the returnees from Juba’s sun-baked international airport.

“Black people in other countries are not seen as people at all,” added Dombek Ding, another deportee.

In Israel, Interior Minister Eli Yishai, rejected this portrayal. At the airport on the day of their deportation, he said that Israel was simply faced with a choice “between the interests of Israel and the interests of the Sudanese,” and in that case, the minister added, “I will choose Israel.”

About 120 South Sudanese were flown to South Sudan from Israel June 17 after being deported from Israel and more arrived on June 25. Several more groups are expected in coming weeks as Israel continues a crackdown on illegal African immigrants.

It’s been years since most of the South Sudanese have lived in their homeland, which was a breakaway province of Sudan until last year, when it became the world’s newest nation.

Despite having picked up some skills and education in Israel, the returnees will likely struggle to adjust to life in South Sudan, which is one of the world’s poorest nations. Running water and power are luxuries here, and most people live in thatched huts, even on the outskirts of the capital. Much of the new nation’s hinterland is still torn by faction fighting and tribal battles.

Bol Duop said it’s a far cry from his life in Israel, where he held down steady jobs for five years.

Ironically, the small community of South Sudanese is specifically being targeted because their new country is considered relatively free and has good relations with Israel. Immigrants from Eritrea and Sudan proper, on the other hand, who make up an estimated 90% of illegal African immigrants in Israel, cannot be deported, because of the countries’ authoritarian rulers.

“The Israelis said to us we had to come back to South Sudan because we had a country to come back to,” Duop added wryly. “Those who had no place to go back to would stay.”

Others praised Israel as a good country to live and work in, and lauded the government for providing extensive social services to its people. Norbert Mayom called the lack of corruption a blessing, especially for an immigrant struggling to make ends meet.

“That’s the best [thing] about Israel,” he said.

He bitterly attacked the Israeli crackdown on African immigrants as misguided, but added that it wasn’t his business to tell Israel how to run its affairs.

“I can’t say much,” he said. “It’s their country, and it’s their right to do whatever they like.”

The returnees said they were picked up in raids and told they had to sign papers agreeing to be “voluntarily repatriated.” Most of them were given about $1,250 cash when they left, and some also brought possessions with them that they amassed during years of working in Israel.

The South Sudan government says it hopes to help returnees get back to their homes in the rural areas, but most of them hope to work or study in Juba.

Few of the returnees have even the slightest idea of their future plans. Most said they wouldn’t try to return to Israel right away, especially since the crackdown is making life tough for South Sudanese.

Despite the difficulties that lie ahead, South Sudanese beamed with pride at the knowledge that they were returning to an independent homeland that won its freedom from Sudan after a decades-long struggle.

“I have come to share with our people in the development,” Kariyam said. “Even if I have a dollar, I will contribute it to the development of this country.”

After a quick glimpse at the construction sites that dot the new capital city, Mayom couldn’t hide his joy at being back home.

”There is a lack of development in Juba, but the land is green,” he said. “I don’t blame the government. This country is a new nation.”