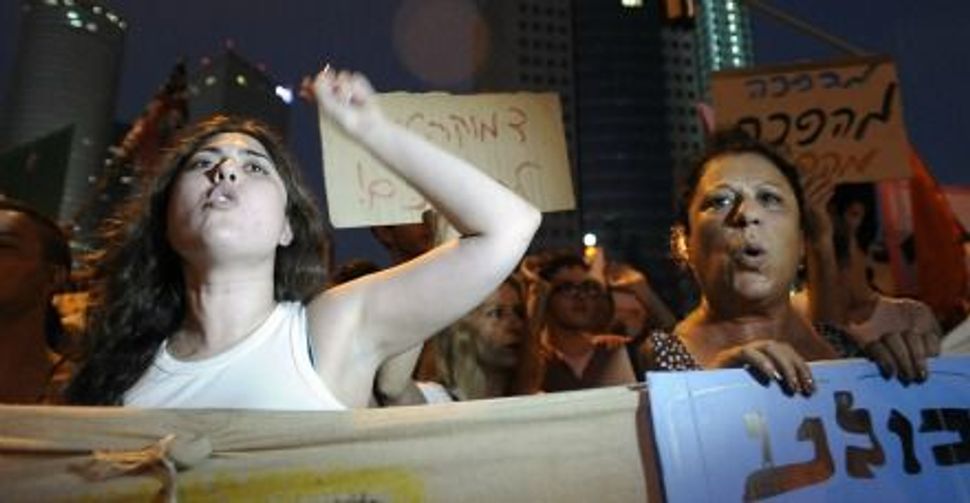 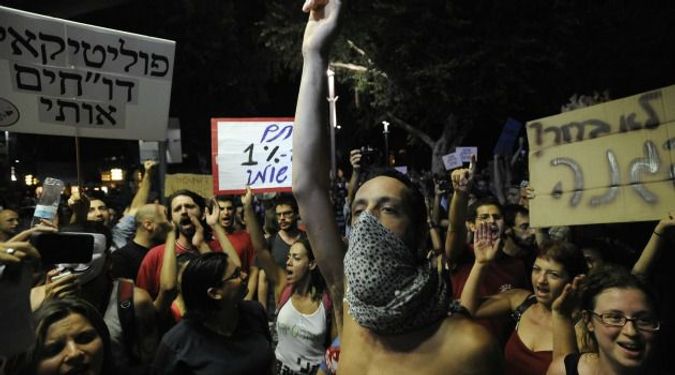 Equal Rights and Responsibility: Should the Israeli social justice movement address problems besides the economic ones that first drew crowds in the streets? Image by getty images

One year after Israel’s social protest movement was born, activists are battling over its soul.

Throughout June, protestors once again started to flow into the streets of Tel Aviv on Saturday nights. They all claimed to be reviving the demonstrations held weekly last summer, when tent cities proliferated all over the country. But it quickly became evident that this time, there were very different ideas among the protestors about what their demands should be.

When a dozen disgruntled young Tel Avivans set up the first protest tents on July 14, 2011, they initially called for affordable housing and lower cost of living. But within days, there developed an ever-growing number of interpretations as to what should fall under the banner of “social justice.” The excitement of a successful movement, one capable of bringing nearly half a million people to the streets, overwhelmed any fine parsing of the differences between these various visions.

But that was then.

More than a year has passed and the government has offered a few concessions to improve social welfare — though far fewer than protestors hoped for — and the cause, which today is promoted by numerous different activist groups all claiming the legacy of the original movement, is even more fractured.

For many, the struggle has taken a patriotic turn, and the rallying cry has become not just equal rights but also equal responsibility, in the form of national service for all men, including Haredim and Arabs who are currently exempt. On July 7, with the government deliberating over what to do when the law exempting Haredi men from army service expires later this summer, some 25,000 people staged a social protest in Tel Aviv where the key demand was a universal male draft. “Frustration about lots of Israelis not doing national service is part of what brought people out onto the streets last year — it just wasn’t translated as a clear demand, so we’re doing so this year as an important part of the social protest,” said Idan Miller, head of Common Denominator, the activist group that organized the event.

Others say that the movement must expand in a different direction — by calling for an end to the occupation. Just as Saturday demonstrations were being revived in early June, a group of activists staged a rally entitled “No Social Justice Without Ending the Occupation.” It attracted 2,000 people, and since then a schism has emerged between protestors on this issue.

“You can’t have social justice for just 7 million people who are Israeli citizens — you have to take everyone under Israeli rule into consideration,” Nir Nader, a leader of the anti-occupation protesters, told the Forward.

The schism between protestors has become most acute in the weeks since June 30, when, during a 10,000-strong Tel Aviv demonstration, 2,000 of the more radical protestors split off from the rest. The breakaway group accused the demonstration’s organizers of placing too much faith in the establishment. At the renegade demonstration, protestors chanted slogans calling for an end to the occupation, and the most common chant was “peace, equality and social justice.”

Then on July 7, when the universal draft-themed demonstration took place, 1,000 activists held an alternative demonstration where many, but not all, called for withdrawal from the territories, as well as for extensive social change. Several prominent leaders of last year’s protests took part in the pro-draft event, including Itzik Shmueli, chairman of the National Union of Israeli Students, but many of their former comrades were at the rival protest. They included Daphne Leef, widely seen as the movement’s instigator, and the charismatic leader Barak Cohen.

Some more centrist protestors are taken aback by talk of the occupation. “It seems to me like an attempt to hijack what we have here for a narrow agenda. I don’t agree with their politics and they shouldn’t bring it in,” said Jonathan Divish, a 29-year-old accounts clerk from Jerusalem, who attended the larger, draft-themed July 7 demonstration. Miller believes that the demand to withdraw unilaterally is too simplistic, “when there’s a real fear that if we withdraw from [the West Bank] we will be attacked like from Gaza.”

But Nader’s camp argues that tying the social struggle to the occupation is essential — not only for moral reasons, but also on economic grounds. A report published in May by the Adva Center, a social policy think tank, found that between 1989 and 2011 the Ministry of Defense was allocated a total of $12 billion specifically for the conflict with the Palestinians, which the Israeli doves believe would end if the occupation were terminated. At a civilian level it found that in 2009 central government subsidies for social services in the settlements averaged $571 per capita, far higher than in the neediest areas inside the Green Line, the formal boundaries of Israel. In Arab localities the figure is $469 per capita; in Jewish development towns, $433 per capita.

The Israeli Social Movement, an organization set up by members of the core group that initiated the protests last year, including renowned orator Alon Lee-Green and last year’s spokeswoman, Stav Shaffir, believes that protestors cannot overlook such figures. “The national budget is coming in October,” said Lee-Green. “If we can’t say that this is bad — that the budget for the occupation comes at the expense of transport, education, from provision for old age — then we can’t talk properly about economic issues in Israel.”

But lawmaker Dov Khenin, a representative of the far-left Hadash party and one of the most popular politicians at last year’s demonstrations, argues that focusing on the occupation is detrimental to effecting real social change. In his view, parties in Israel lack any impetus to formulate social policies that appeal to the public, because they know that they win or lose elections based on issues related to the conflict. “Israeli governments are elected not on social and economic issues, [but] rather on the dilemma of the territories and peace, and this is why the highly capitalist policies of the last 20 years continued,” he said.

Ami Kaufman, a regular demonstrator and — as a founding contributor to the Israeli-Palestinian online magazine +972 — an influential voice on the Israeli left, agrees with Khenin’s analysis about the conflict dominating politics. Because the social protests have steered clear of the occupation, they have brought left and right alike out to the streets calling for change, and possibly altered the standard Israeli political equations. “The left-right paradigm [based on the conflict] has been here for 64 years, and in the next election we may be able to see for the first time an election based on economic issues rather than issues related to the conflict with the Palestinians,” he predicted.

For Lee-Green, like many other protestors who are calling to integrate the occupation issue this year, his change of heart since last year stems from his disappointment with the government’s response to the demonstrations. He is convinced that more would have been achieved had the protest movement forced elections, in which social issues would have inevitably dominated. But in his view the fact that policies regarding the occupation were left unchallenged allowed the government to retain its credibility. “This is why the government survived — because we didn’t deal with these issues,” he said.