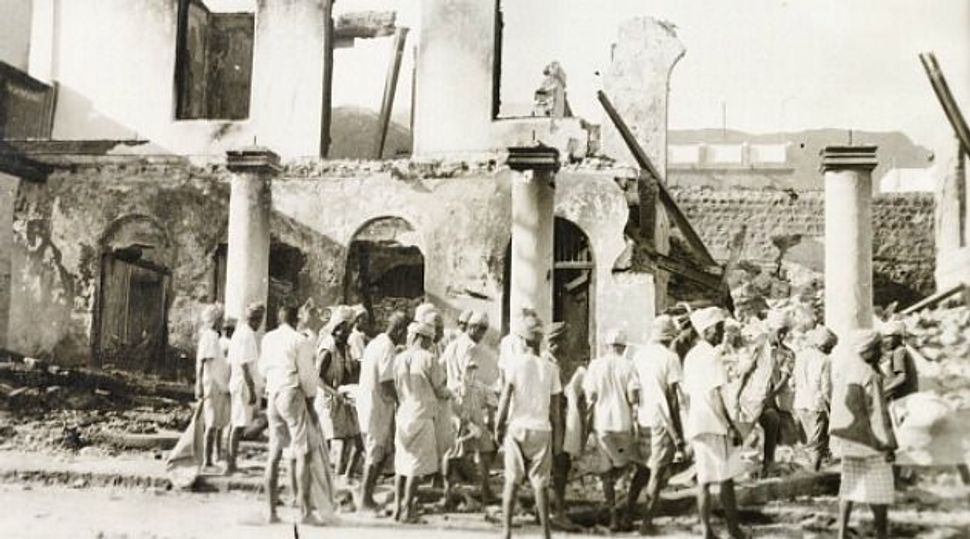 Seeking Refuge: Yemenis gather around the ruins of buildings in the Jewish quarter after riots broke out. A new bill seeks to link any discussion of the plight of Palestinian refugees with that of Jews driven from Arab lands. Image by getty images

In a rare show of pre-election bipartisanship, lawmakers from both parties are sponsoring a bill that would link the plight of Palestinian refugees with that of Jews from Arab countries.

The legislation would require the administration to include mention of the need to resolve the issue of Jews who were expelled from their homes in Arab countries in diplomatic discussions about Palestinian refugees. The bill specifically cites talks that take place within the framework of the so-called Middle East Quartet, made up of the United States, Russia, the European Union and the U.N.

The bill marks the most far-reaching attempt to date to couple Jewish and Palestinian narratives of displacement, and as such it has earned varying responses.

Some advocates of Jews from Arab countries see tying together the two groups’ national histories as an important step toward recognizing the plight of Jews who long lived in the Middle East. The history of their expulsion and dispossession from Arab countries after the establishment of Israel in 1948 has often been overshadowed by the tragic record of Eastern European Jewry. Opponents, on the other hand, view the proposed legislation as no more than a cynical attempt to use the hardship suffered by these Jews, often referred to as Sephardim, as a counterweight to Palestinian claims raised at the negotiation table.

The legislation is co-sponsored by three Democrats and three Republicans, including Florida Republican Ileana Ros-Lehtinen, who chairs the House Committee on Foreign Affairs, and Howard Berman of California, the ranking Democrat on the committee. Other sponsors include Democrats Jerrold Nadler and Joseph Crowley from New York, and Republicans Ted Poe of Texas and Bob Turner of New York.

The proposed bill expands on a previous resolution passed in 2008 and includes, for the first time, practical measures. It requires the president to report to Congress within one year on actions he has taken “to use the voice, vote and influence of the United States to ensure” that any international discussion on Palestinian refugees “must also include a similar explicit reference to the resolution of the issue of Jewish refugees from Arab countries.” The bill purposely does not specify what the preferred resolution for any of the refugee problems should be—a deliberate omission, according to a staffer for one of the members of Congress involved in the bill.

Given the upcoming elections, it is not likely that the proposed legislation will come to a vote before Congress adjourns. Its advocates nevertheless see the bill’s strong bipartisan sponsorship as an important advance.

“We want it to be on the Middle East peace table; that’s all we’re asking for,” said Stanley Urman, executive director of Justice for Jews From Arab Countries. The group, a coalition founded by several Jewish groups including the American Jewish Committee, the Anti Defamation League, B’nai B’rith International and the Conference of Presidents of Major Jewish American organizations, has been promoting the call for recognition of rights of Jews from Arab lands. “If there will be a discussion on redress for Palestinian refugees,” said Urman, “there should also be redress for Jewish refugees. This should all be on the table.”

The plight of Jews from Arab countries was first raised in the 1970s in Israel, when the government tried to get the United Nations to recognize Jewish refugees as part of Resolution 194, which called for the repatriation of Palestinian refugees. The attempt failed, but activists in the Sephardic community, mainly outside Israel, continued to make the case for acknowledging the expulsion of Jews from Arab countries as a matter worthy of recognition and possible reparation. In 2010, Israel’s Knesset passed a law requiring the government to include compensation to Jews displaced from Arab countries in any future final status agreement with the Palestinians. The bill, however, is vaguely worded and does not make receiving compensation a condition to signing a peace deal.

Official Israeli estimates put the number of Jews who were forced to leave their homes in Arab countries following the establishment of the State of Israel at 850,000. In some countries, such as Iraq and Yemen, pogroms and riots against local Jews broke out as Israel struggled for its independence, forcing Jews to flee, leaving their property behind. In other countries, Jews were targeted later on. Most of Egypt’s Jews left in 1956, following an anti-Jewish government decree issued after the Sinai war with Israel; in Morocco, 100,000 Jews were forced out in 1963, and in Libya, riots and government decrees led to the escape of the country’s Jews after the 1967 war.

Gina Waldman was 19 when she and her family were driven out of their home in Tripoli, Libya. She remembers the crowds pouring into the streets in the summer of 1967, torching Jewish homes and businesses. Her family, like other Jewish families in Libya, was allowed to exit the country under the condition they leave all their property behind. Though the angry mob followed the family to the airport, they finally managed to get on a plane to Malta and from there to Italy, Waldman recalled.

“The first step is to acknowledge that these wrongs were done to us,” said Waldman, who eventually moved to the United States and became active in the campaign to free Soviet Jewry. After this campaign, Waldman co-founded Jews Indigenous to the Middle East and North Africa. She is also vice president of JJAC. Both groups, and a British organization named Harif, have been pushing for more than a decade for recognition of Jewish refugees from Arab countries.

“In recent years, as the peace process stumbles, significant people in the Israeli government became more interested in the issue and managed to promote it politically,” said Henry Green, professor of Judaic studies at the University of Miami. Green is the international director of Sephardi Voices, an audio-visual project that collects the testimonies of Jews from Arab countries.

In addition to the law it passed in 2010, the Knesset has organized a forthcoming conference scheduled for September to discuss Jewish refugees from Arab countries.

But this flurry of activism has done little to resolve inherent conflicts raised by the calls for recognizing Jews from Arab countries as refugees. Two leading Sephardic lawmakers in Israel, former Knesset speaker Shlomo Hillel and former Meretz MK Ran Cohen, both from Iraq, have spoken out in the past against such recognition. “I am not a refugee,” Cohen said. “I came at the behest of Zionism, due to the pull that this land exerts, and due to the idea of redemption. Nobody is going to define me as a refugee.”

The other conflict raised by the issue is more practical — but no less fraught: Should Jewish refugees from Arab countries receive compensation for their hardship and lost property?

Even as Israel has demanded that Arab governments acknowledge wrongful treatment of their expelled Jewish populations, successive Israeli governments have discouraged Sephardim themselves from claiming compensation for their lost property.

The reason, said Yehouda Shenhav, a sociology and anthropology professor at Tel Aviv University, was Israel’s wish that this lost property be deemed fair exchange for the property lost by Palestinians who fled or were expelled from Israel during the 1948 war that accompanied the country’s founding. This narrative is part of a broader Israeli claim of “population exchange,” according to which a rougly equal number of Jewish and Palestinian refugees essentially exchanged places during the 1948 war and subsequent conflicts. In Israel’s view, both communities should be seen as resettled, thereby preempting the Palestinian refugees’ demand for a right to return to present-day Israel, or proposals from some in the international community that both sets of refugees receive compensation for their losses.

Palestinian leaders argue that the settlement of their refugee issues with Israel cannot be held hostage to the separate displacement of Jews, in which Palestinians played no role.

Efforts to obtain comment from the bill’s congressional sponsors on why their bill makes this link were unsuccessful.

Urman stressed that JJAC and other activists for the cause were not after material reparations. “Our issue is not about money,” he said. “We want recognition and justice.” He cited South Africa’s Truth and Reconciliation Commission, which identified the victims of the Apartheid era and set the historical narrative straight, as one possible path to justice for both sides at some point, “after resolution of many other urgent problems that need to be settled.”

Shenhav, author of the 2006 book “The Arab Jews” and a leading thinker of Israel’s left, saw attempts to equate Mizrahi Jews such as himself with Palestinian refugees as politically motivated efforts to circumvent dealing with the Palestinians’ claim. “There is no doubt that Sephardi Jews are hurting themselves with this,” he said.

The closest that Israelis and Palestinians ever got to discussing the two refugee communities was during the Camp David Summit of 2000. President Clinton then proposed setting up an international fund that would support all victims of the conflict, including Jews displaced from Arab countries.

Today, in the absence of any visible action on the peace process front, “There is an extreme asymmetry,” to any linkage between the mass population movements of the Palestinians and the Sephardic Jews, said Hussein Ibish, senior fellow at the American Task Force on Palestine. The arrival of Jews to Israel from Arab countries, even when forced, marked “the fulfillment of a national project,” he said, while the displacement of Palestinian Arabs marked “the destruction of a national project.”