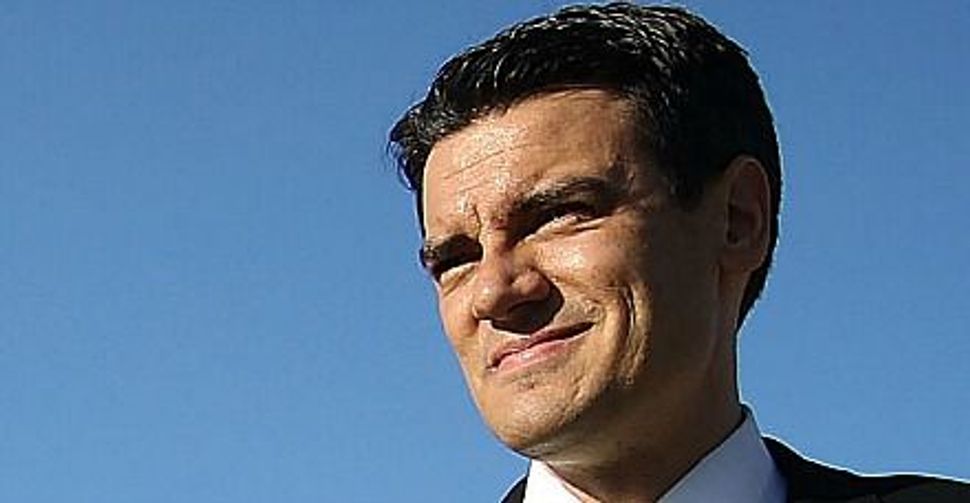 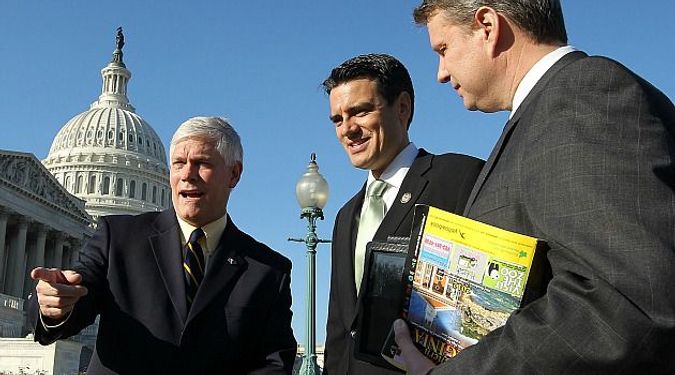 LOL: Congressman Kevin Yoder, shown here with fellow lawmakers, drew plenty of guffaws with revelations that he went swimming in his birthday suit during a trip to Israel. The revelations shone a spotlight on the junkets taken by politicians and even some journalists. Image by getty images

Belated revelations of the escapades of a group of congressmen in the Sea of Galilee last year have put a number of more serious issues in the spotlight.

Comedians had a field day in the immediate aftermath of a report in Politico that Kansas Republican Kevin Yoder went swimming nude in the company of a group of Republican lawmakers, their families and staff members last August. But the group’s long night of eating and drinking at a posh restaurant on the sea’s shore last year, followed by a late-night swim, has also brought to light details of a criminal investigation into alleged corruption by a member of Congress; a legal loophole that allows advocacy groups to take lawmakers on overseas junkets despite policies purportedly banning this, and a debate on the ethics of journalists who also receive free trips to Israel from the group in question — an offshoot of the powerful Washington-based lobby, the American Israel Public Affairs Committee.

FBI agents came around asking questions of some members of Congress after the tour of 30 Republican lawmakers, sponsored by the American Israel Education Foundation, as the offshoot is known. But as it turns out, the FBI was after bigger fish than Yoder.

Their probe, according to several reports, was aimed at another participant in the delegation, Republican Michael Grimm of New York. Grimm, a subject of federal investigation into his campaign financing, continued from Israel to another privately sponsored trip, to nearby Cyprus. The president of the group sponsoring that visit, the Cyprus Federation of America, was arrested in June on corruption charges. Until the arrest, Grimm had failed to file a required report to Congress documenting the sponsored visit. He filed an amended report doing so just one day after the arrest.

For Grimm, public focus on the visit to Israel and the FBI investigation came at a time of other troubling news. Ofer Biton, one of his top fundraisers, was arrested for immigration fraud on August 17. The arrest of Biton, who was also once a prominent aide to Rabbi Yoshiyahu Pinto, a controversial Israeli kabbalist, was widely viewed as an attempt to pressure Biton into testifying against Grimm.

The Sea of Galilee incident also highlighted the major role played by the AIEF in cultivating a pro-Israel Congress by taking lawmakers to the Holy Land on fully funded VIP missions.

A glance at the congressmen’s agenda for the tour, provided to the Forward by the organizers, sheds light on the content injected into these junkets. In an event-packed six-day excursion, lawmakers met with Israel’s president, prime minister and opposition leader. They received briefings from top military brass and were taken on tours of the country’s borders, emphasizing what the itinerary described as “strategic” lessons and briefings. Organizers made sure to include a meeting with Salam Fayyad, prime minister of the Palestinian Authority, which exercises limited rule over parts of the Israeli-occupied West Bank.

Congress reformed rules governing such privately sponsored trips for members in 2007. The new regulations require advance approval of a trip by the House Committee on Ethics and a full report on expenses once the trip is completed. It forbids participating in trips that lobby organizations are sponsoring to limit their undue influence on lawmakers. But the rules allow for trips to be paid for by charitable organizations, such as AIEF, even if they are closely affiliated with a lobbying group, as AIEF is with AIPAC.

AIEF was set up in 1990 as an organization that is separate yet affiliated with AIPAC. Founded as a tax-exempt and tax-deductible public charity according to provision 501(c)(3) of America’s tax code, AIEF draws its top management and board members from those who run AIPAC. The group also gets the lion’s share of its funding in the form of a grant from AIPAC. Yet, AIEF itself is not a lobbying organization and as such is allowed to sponsor tours for members of Congress, in accordance with congressional ethics rules. In 2009, AIEF raised more than $26 million and used the funds for educational programs and for funding travel to Israel.

AIEF is the largest sponsor anywhere of congressional travel, spending more than $1 million a year to send representatives and their staff members to Israel, according to disclosure forms filed with the House Ethics Committee. Most travel is scheduled for odd years, when members are not busy with their re-election campaigns. Last summer, 81 House members traveled to Israel in August. AIEF’s average cost for sending a member of Congress to Israel is about $10,000.

Patrick Dorton, an AIEF spokesman (who has also functioned as a spokesman for AIPAC), stressed that AIEF submits “extensive, detailed and individualized information to the Ethics Committee for each participant” that goes on its Israel trips. The trips themselves, he said, “are intensely substantive and filled from morning until evening with educational discussions and meeting with government officials that offer an in-depth perspective into Israel’s foreign policy, regional threats, national security, history and culture.”

Other Jewish organizations, including the American Jewish Committee and various local Jewish community relations committees, take national and local politicians on trips to Israel, as well. But they are not defined as lobbying groups. J Street, the more dovish Israel lobby group, set up its own educational sister organization this year that also sponsors visits to Israel.

AIEF takes more than just members of Congress on trips to Israel; it takes journalists, too, on a regular basis. Discussing the latest Sea of Galilee events, Chris Matthews host of MSNBC’s“Hardball,” said on August 20: “I’ve been there a number of times, a trip sponsored by a pro-Israel group, Jewish group, very educational trips. They show you a lot about the geography of the land and the situation they’re facing with the Palestinians.”

MSNBC did not return several calls requesting comment on Matthews’ participation in these trips and the network’s policy on joining press junkets.

A spokesman for AIEF would not provide details on the number of reporters hosted by the group in Israel, but there are estimates based on reports of participants indicating that dozens of journalists have participated in pro-Israel junkets throughout the years.

“It’s a super-effective strategy,” said David Plotz, editor-in-chief of the online magazine Slate. Plotz attended an AIEF trip in 2007. He noted that while the junket was “incredible fun,” with business class travel and fancy hotels, organizers packed the agenda with informative tours and “amazing interesting people,” including Israeli President Shimon Peres, top officers of the Israel Defense Forces and a senior Palestinian representative. Participants were free to quiz their hosts and to pose tough questions, but still, Plotz said he left Israel with the impression that “Gaza is a mess, the [security] wall is serving its purpose and that — oh, my God —Iran is six months away from nuclear weapons.” Slate does not have a policy prohibiting participation in junkets as long as reporters clearly state where the funding came from.

Many other American publications do not prohibit trips paid for by businesses or interest groups, though it is common to require full disclosure when reporting on topics relating to the tour. The New York Times, The Wall Street Journal, The Washington Post and all major TV networks insist on paying for their own expenses in all cases, as does the Forward.

“A responsible journalist has no business taking a free trip to Israel — or to any other country, or to a Hollywood film studio’s junket at a resort, or to any other destination that is involved in the subject matter that the journalist covers or is likely to cover in the future. Period,” said Samuel Freedman, a journalism professor at Columbia University’s Graduate School of Journalism and an expert on media ethics. Freedman stressed that even if the free trips do not create actual bias in the reporting, “they absolutely create the perception of bias, and that perception is just as corrosive to a journalist’s credibility.” Larry Lorenz, professor emeritus of journalism at Loyola University New Orleans, agreed that receiving free trips is wrong regardless of whether reporters write about the issue. “Journalism organizations should be concerned about giving the appearance of being bought.,” Lorenz said.