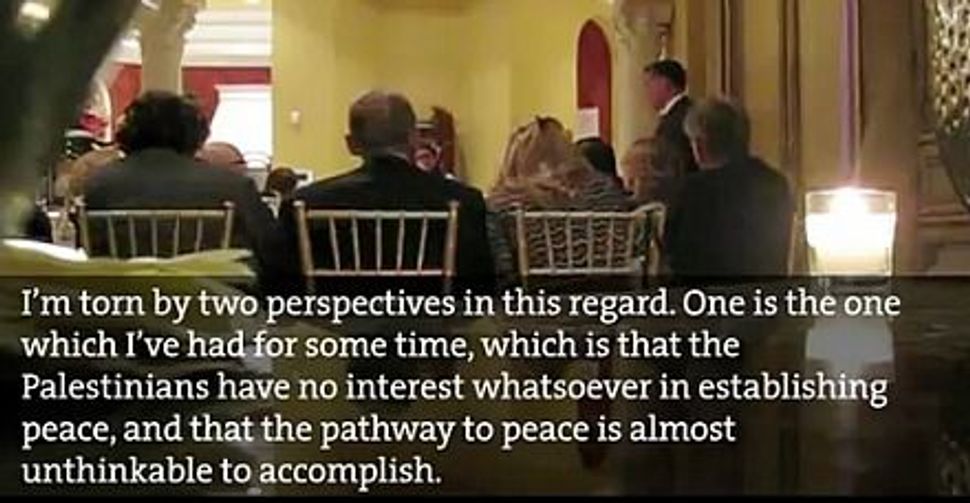 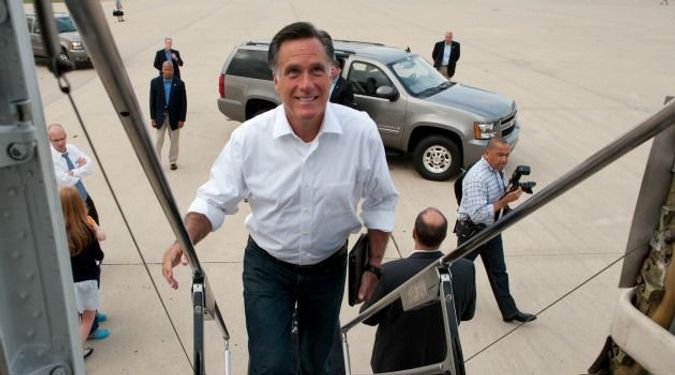 Caught on Tape: Mitt Romney was already on the defensive over controversial comments about supporters of President Obama. Now, he will have to explain his Middle East policies.

Mitt Romney trashed the two-state solution to the Middle East conflict in his now-infamous hidden camera video, saying “there’s just no way” to talk peace with the Palestinians. 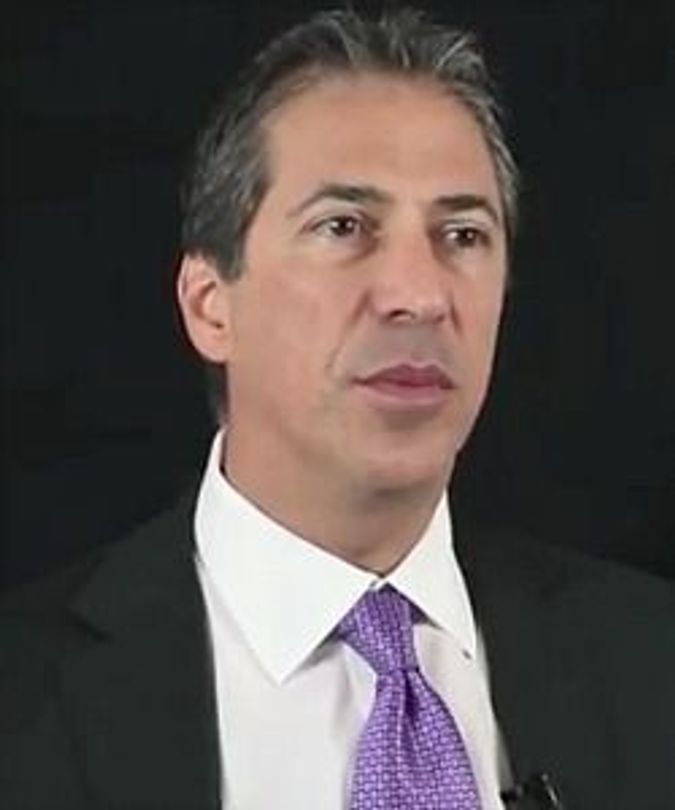 In a private $50,000-a-plate fundraiser, caught on tape and published on Mother Jones’ website, Romney expresses candidly his deep skepticism toward a two-state solution, which is part of the Republican platform recently adopted by the GOP.

“I look at the Palestinians not wanting to see peace anyway, for political purposes, committed to the destruction and elimination of Israel, and these thorny issues, and I say there’s just no way,” Romney said of the chances to achieve an independent Palestinian state alongside Israel.

In the tape, Romney indicated that if elected president, he would not actively pursue peace talks between Israelis and Palestinians.

“What you do is, you say, you move things along the best way you can. You hope for some degree of stability, but you recognize that this is going to remain an unsolved problem…and we kick the ball down the field and hope that ultimately, somehow, something will happen and resolve it.”

The Republican candidate went into great detail describing the “thorny issues” that make it difficult to achieve a two-state solution, including those relating to borders, to the proximity of the Palestinian state to the center of Israel and to air transportation.

“There’s just no way,” a two state solution is feasible, Romney concluded at the May 17 event.

The fundraiser took place at the Boca Raton home of Jewish Republican donor Marc Leder, who has been active in raising money for the Republican candidate this election cycle. Leder, co-CEO of Sun Capital Partners, a private equity company, has given six figure donations to a pro-Romney Super PAC. Leder, according to a New York Times report was inspired to go into the private equity business by Mitt Romney’s profitable endeavors at Bain Capital. According to the Times, Leder’s Sun Capital led one of five companies it bought into bankruptcy.

Romney’s discussion of Middle East peace prospects at the fundraiser drew little attention compared to his blunt assessment of the U.S. political divide.

Romney’s attack on the two-state solution comes at the end of a week in which the Republican candidate leveled a barrage of criticism at President Obama’s foreign policy, speaking out against the administration’s dealing with the protests in the Middle East and at what Romney described as Obama’s refusal to meet with Israeli Prime Minister Benjamin Netanyahu.

Obama, however, found unlikely support from the pro-Israel American Israel Public Affairs Committee. In a message for the Jewish New Year issued by AIPAC, Obama wins praise for standing up for Israel.

“We want to take this opportunity to thank America’ s elected leadership for their steadfast support of the U.S.-Israel relationship,” AIPAC’s message read, detailing the work of the administration and Congress to strengthen Israel’s security. “President Obama and the bipartisan, bicameral congressional leadership, have deepened America¹s support for Israel in difficult times,” AIPAC stated.

The video capped a difficult two-week period for Romney, who has fallen slightly behind Obama in opinion polls, taken heavy criticism for a hasty attack on the president during assaults on U.S. diplomatic compounds in Egypt and Libya and faced damaging news reports about infighting in his campaign team.

On the West Bank, Palestinians said Romney was wrong to accuse them of not seeking peace.

Obama’s campaign quickly criticized the video, but White House spokesman Jay Carney said he was uncertain if the president had seen it.

Reaction to the videos overshadowed an effort by Romney’s campaign to offer more policy specifics and issue a set of hard-hitting new television ads to address rising worries from Republicans about the direction of his campaign.