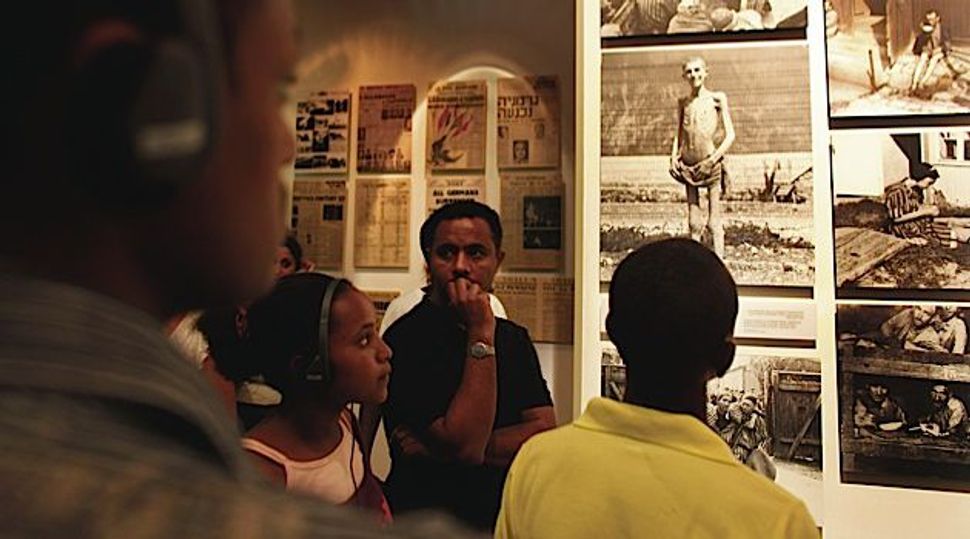 History of Pain: Sudanese refugees from Darfur, where the government has been accused of genocide, visit the Yad Vashem Holocaust memorial in Jerusalem. Image by Getty Images

Israel’s Interior Ministry is preparing prisons in the Negev desert for the mass detention of some 15,000 Sudanese nationals who are seeking asylum as refugees in the Jewish state.

The planned sweep, which the ministry now hopes to launch sometime after October 30, follows hard on the heels of Israel’s deportation in June of hundreds of undocumented migrants from South Sudan, the predominantly Christian country that gained its independence from Sudan in July 2011.

But the challenge of the asylum seekers from Sudan is something entirely different. Not only are the numbers involved vastly larger; Sudan, a predominantly Arab and Muslim country, remains in a state of war with Israel, and the two countries have no diplomatic relations. This makes deporting them back home impossible.

The Sudanese would also face prosecution in Sudan if they were returned there, since the government prohibits its citizens from traveling to Israel.

The Interior Ministry hopes that eventually a third country will be found to take them. Meanwhile, its plans for incarceration are proceeding apace.

Seated in a crowded apartment behind Tel Aviv’s central bus station, Jumaa Ahmad Hamad, one of those the government will target, asked: “Why should I go to prison? I am a refugee, not a criminal.”

Hamad, who does not know his exact age because he never got a birth certificate, looks about 30. He is a survivor of the Sudanese government’s campaign against rebellious tribes in Darfur, a campaign whose many reported atrocities led prominent American Jewish leaders, among many others, to denounce Sudan for genocide between 2003 and 2007.

Hamad recalled witnessing his father and uncle being killed during a 2003 attack by militiamen aligned with the Sudanese regime in his farming village of Magarsa. Its 180 thatch houses were torched, and survivors fled to refugee camps in Chad, he said, adding that Magarsa and the surrounding area are still controlled by the pro-government militia, known as the Janjaweed.

Khaled Adam, 32, another Darfur survivor, said he is worried about how his 3-month old-son, Mozan, will fare behind bars. “And there are sick people too,” he said. “How can you put them in prison?”

Hamad, who arrived in Israel in 2008, initially served 40 days in prison for illegally entering the country from Egypt, then worked in housekeeping at a hotel and as a carpenter — illegally, since the asylum seekers are not allowed to obtain work permits.

He fled to Libya and Egypt before making it to Israel, a pattern common to many of the Sudanese asylum seekers. In Libya, Hamad said, he was told to work as a slave and, while in Egypt, he and the other Sudanese felt physically unsafe after security forces killed 28 asylum seekers at a protest site outside United Nations refugee agency offices in Cairo in December 2005.

“It’s all blatant racism there,” he said. “Here the racism is inside, not outside. It’s better that way.”

Faced now with the prospect of indefinite detention without trial, Hamad had no doubt about his choice, if forced to choose.

“If I were to go back to Sudan it would be bullets, and here it is prison,” Hamad said. “I’ll take prison.”

The United Nations High Commissioner for Refugees has supported the argument by the Sudanese that their claims to refugee status should be investigated and that they should be afforded protection, not imprisoned. But Israel, which considers them illegal immigrants, has balked at processing and adjudicating all but a handful of their asylum claims.

Interior Ministry spokesman Ohad Yehezkeli said that imprisoning the Sudanese was justified, among other things, as “a message to [other Africans] on the way to Israel, and it also tells the infiltrators who are here that they are at one step before their being taken out of the country.”

To underscore his determination to imprison the Sudanese, on October 10, Interior Minister Eli Yishai paid a well-covered public visit to the newly built detention facility in the Negev desert, which is to hold the Sudanese asylum seekers.

Yishai first announced plans in August to jail all Sudanese asylum seekers without trial, starting on October 15. The plan is to be expanded to include Eritrean asylum seekers at a later stage.

But on October 11, Justice Nava Ben-Or of the Jerusalem District Court barred implementing the plan before at least October 30, when she will hold a hearing on a petition against the arrests filed by five civil and refugee rights groups, and strongly backed by the UNCHR.

Yishai, a leader the ultra-Orthodox Sephardic party Shas, defends his plan as a demographic imperative. He cites legislation passed by the Knesset in January that provides for incarceration for up to three years of ”infiltrators.”

Yehezkeli told the Forward that his boss views the Sudanese and other ‘’infiltrators’’ from Africa as a demographic threat to the state’s Jewish character.

“They do this by the very act of coming here,” Yehezkeli said. “There is a Jewish state, and the state cannot absorb them. The possibility that they remain here means turning Israel into a state of all its citizens, something that contravenes the Declaration of Independence and everything that was behind the establishment of the state.”

Government statistics do not support the view that Israel’s Jewish character is under demographic threat from asylum seekers. The total number of asylum seekers in Israel is estimated at 60,000 in a population of 7,765,700. And in recent months there has been a dramatic drop in the number of asylum seekers entering Israel, a trend attributed by Prime Minister Benjamin Netanyahu to the erection of a fence along the Egyptian border.

Despite this, the asylum seekers remain potent political fodder for Yishai and other right-wing politicians whose declarations on the issue reflect and stoke pre-existing animosity against the Africans.

“Most of the people arriving here are Muslims who think the country doesn’t belong to us, the white man,” Yishai told the daily newspaper Ma’ariv on June 3 in one such statement. In fact, most of the immigrants from South Sudan and Eritrea are Christians. Yishai’s own family immigrated to Israel from Tunisia in the 1950s.

Many lower-income Israeli residents of the neighborhoods in which the immigrants have settled are especially supportive of Yishai’s initiative. On Salame Street in Tel Aviv, near where Hamad and many other Sudanese live, there was scant sympathy for their situation.

“Children can’t walk around here alone,” said Elvin Khamkayer, 31, who works in a fabric store. “There has been a wave of sexual attacks on young girls, and they bring all kinds of diseases from Africa. I know they also have to live, but if it is either us or them, then I prefer us.’’

Yehuda Bauer, a leading Holocaust scholar and academic adviser to Yad Vashem, Israel’s national Holocaust museum, termed the idea of imprisoning the Sudanese to safeguard Israel’s Jewish character “nonsense.” Noting that Israel continues to bring in legal foreign workers from Asia, he said, “We could permit the Eritreans and north Sudanese to work instead of taking more people from Thailand and the Philippines. This would keep them occupied, help the Israeli economy and comply with international law. But the attitude of the ultra-Orthodox is clearly racist. If they were Norwegians, they wouldn’t be put for three years in a detention camp in the desert.”

Orit Marom, a spokeswoman for the group Aid Organization for Refugees and Asylum-Seekers, a co-plaintiff in the court petition against Yishai’s plan, does not blame Yishai alone for the initiative. The other ministers “are approving this huge outrage with their silence,” she said.

Netanyahu’s spokesman, Mark Regev, declined to comment on the issue for this article.