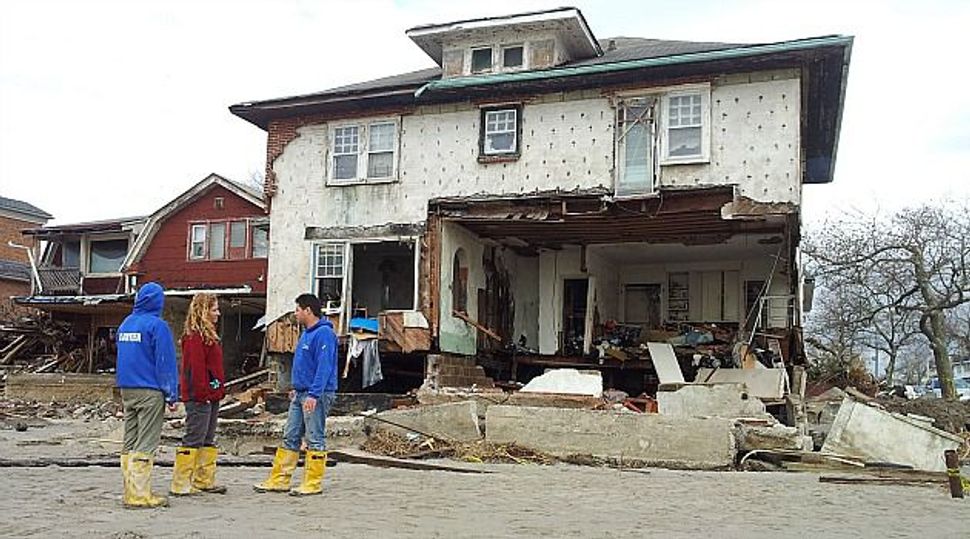 When a group of Israeli army veterans arrived in New York to help with rescue efforts one week after Hurricane Sandy, they expected to take their cues from government rescue agencies on the scene.

Instead, in place after place, they found themselves giving the cues to volunteers seeking guidance. The government agencies seemed all but absent.

“I did not see anyone in Far Rockaway,” said Nathan Mann, one of 12 Israelis who came to offer relief assistance to the worst hit areas.

The delegation’s members were all alumni of Mechina Ein Prat, known in English as the Leadership Academy, a pre-army institute founded in 2001 in the West Bank settlement of Kfar Adumim. The Mechina, a division of Ein Prat, an Israeli Zionist and Jewish identity program for young adults, seeks to prepare recent high school graduates for service in the Israeli army’s elite units. The 12 volunteers, all Israelis, ranging in age from22 to 31, are now members of the army reserves after having completed their service. Many served in war situations or in relief capacities in northern Israel during the Second Lebanon War and in Sderot, a city in southern Israel that has been the target of sporadic rocket bombings from Gaza.

Finding little evidence of the presence of the Federal Emergency Management Agency and the Red Cross in certain neighborhoods, the Ein Prat members have helped organize volunteers in Far Rockaway in Queens, Coney Island and Sea Gate in Brooklyn and hard hit communities in Staten Island. Their efforts have included cleaning out wrecked homes and stores, bringing in emergency supplies, including food and water, and monitoring elderly residents who refused to be evacuated.

The communities they helped were among the hardest hit, and were in many cases home to large concentrations of Jews — a fact that was not incidental for members of the delegation. Back in Israel, Ein Prat’s mission is to strengthen young people’s Jewish and Zionist identity and sense of service to Israeli Jewish society.

“If this situation was in Israel, it’d be obvious for us to help,” said Tamar Steinberg, a commander in the Israel Defense Forces, where she led basic training and taught Zionist education programs for immigrant soldiers. “But here, it’s also our people, our community.”

Even before watching reports from Israel, Mann could see that New York needed help, noting, “There were transportation difficulties, miscommunication between relief efforts and needs.” He quickly realized that the situation was direr than emergency planners originally expected. Later, when he arrived in Far Rockaway, he did not see FEMA workers. In Sea Gate, he saw only local police and some Verizon workers on the ground.

When Ein Prat was in Coney Island, cleaning up stores along the boardwalk, Mann said he did see FEMA and Red Cross workers in the neighborhood. But local residents reported very little help from those organizations. Chabad Rabbi David Okunuv, who leads the Warbasse Jewish Heritage Congregation in Coney Island, said he did not see workers from either agency at the Amalgamated Warbasse Houses. Okunuv said he heard rumors that the National Guard was supposed to help as well, but could not confirm their presence.

Ruth Lichtman, an 89-year-old Warbasse resident who walked down 16 flights of stairs to escape her apartment after the storm cut her building’s electricity, has stayed at a friend’s apartment across the street at the Trump Village Apartments. Lichtman said National Guard members knocked on her friend’s door five days after the storm. “We asked for blankets and food, but no one ever came back,” she said.

Warbasse resident Anya Klozner, whose family also lives Warbasse, wrote in an email that she spoke with security guards who had specifically “asked Bloomberg and Cuomo for FEMA, Red Cross and National Guard assistance but NOTHING ever came.”

Their experiences were not unique. New York Times columnist Joe Nocera reported visiting Belle Harbor, one of the most devastated Rockaway communities, on November 9 — 11 days after the storm hit. “To the extent that there was a government presence, it consisted mainly of a Medicare truck parked outside,” he wrote. Team Rubicon, a volunteer disaster relief group made up of U.S. military veterans, had parachuted into the breach and begun organizing other volunteers in the relief effort.

Anne Marie Borrego, director of media relations at the American Red Cross, said mobile units have been canvassing numerous neighborhoods in New York, including those with large Jewish communities. The Red Cross’s online disaster newsroom has been listing the locations where units will be stationed daily.

Borrego said that the sheer scope of destruction wreaked by the storm and the challenges of treacherous roads and gas shortages delayed the Red Cross’s initial reaction. But she said her agency was now immersed in the largest disaster response in the United States in five years.

“We’re gonna be there as long as we’re needed,” she said.

The Israeli group’s trip to New York was arranged by Lynne Galler, an American board member of Ein Prat. Four days after the storm flooded her childhood home in Hewlett Harbor, N.Y, Galler began coordinating with the UJA-Federation of New York to fly academy alumni to the United States. Five days later, the first wave of volunteers arrived from Tel Aviv, via Zurich, amid a nor’easter storm that brought more than a foot of snow to areas around New York. Within hours, the entire group was in Far Rockaway, home to a large population of elderly Polish and Russian Jews, who had been abandoned in high-rise buildings.

In areas where the Red Cross was not present, unaffiliated volunteers began to look toward Ein Prat volunteers for guidance. Delegation member Elyz Tzur, who is the founding CEO of Lev Echad (“One Heart”), a volunteer organization, and has led that group’s civil relief operations during several Israeli conflicts, said he and his colleagues were trained to operate under duress. “Emergencies are when things don’t operate, when people can’t take care of things themselves,” he said. “People need to know when, why and someone to coordinate it.” The Ein Prat members did not place direct blame on FEMA or the Red Cross, but were taken aback at the scale of the devastation.

Shani Lachmish, whose post-army work has focused on serving injured soldiers and bereaved families, recalled an encounter with one of the first victims she met in New York. “I knocked on one door of an elderly woman, an Israeli who came here a few years ago. She was crying. She was on the 11th floor of her building. She couldn’t walk. She only eats kosher. I had nothing to give her. And so we just cried together.”

Mann said that, of all the places where he has provided aid, “this has been a situation that has been the most severe.”

Mann, an economics and sustainability major at the Interdisciplinary Center Herzliya, added, “It’s a reminder of the power of nature and we have to understand and see the differences between that and take that into account for the future. The impact of nature here was larger than I have ever seen. If you look in recent history, the main huge disasters in the world were because of nature. The earth is telling us something. People have to wake up about that.”