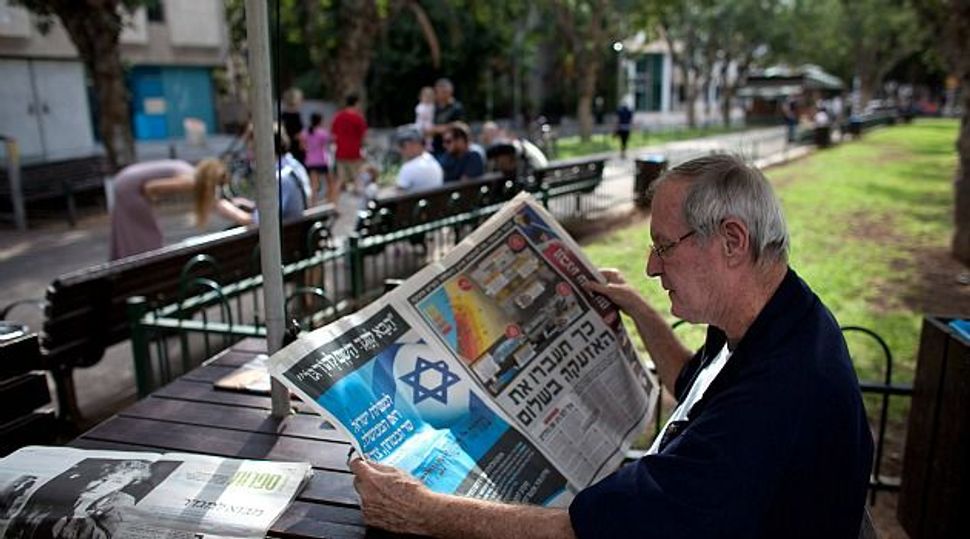 No Big Deal: Not all Israelis are living in fear. Some shrug off the latest round of rockets as a price of life in the Middle East. Image by getty images

Emanuel Hatzofe, 84, took his time getting to the shelter of the thick concrete sea wall in Jaffa on Sunday when Israeli air-raid sirens over Tel Aviv warned of incoming rockets from the Gaza Strip.

The retired sea captain, once a guerrilla with the pre-state Jewish underground, carried his wooden stool with him, as well as a little cushion, for comfort.

The siren allows 90 seconds maximum to take shelter. It had gone silent by the time Emanuel, easing the bad knee where the bullet went through in 1948, got down in a corner of the wall, the Mediterranean Sea glinting lazily in the sunlight on the other side.

There was a double detonation in the sky somewhere over Jaffa, inland from the shore.

“That was two bangs,” he corroborated. Israel’s Iron Dome interceptor had knocked out two long-range rockets fired by Palestinian militants for the fourth time in four days.

He screwed up his eyes and looked up at a lingering twist of white smoke and vapour trailing in the sky above the old Arab town of quiet lanes and little stone mosques, now a Tel Aviv district. It was the only trace of the war to the south.

“There will never be a solution to this,” Emanuel says.

Sitting outside his cramped workshop in an ancient wooden freight wagon from Belgian railways, he casts his mind back a long way.

“I went to Gaza when I was eight on a school trip,” he says. That would have been in 1936. “They threw stones at us and I got a bad cut in the forehead. Look.”

It’s hard to pick out the faint star of an old wound in his wrinkled brow. He moves on.

“I was in the Palmach, when we fought the British and the Arabs, you know?” The Palmach was the elite strike force of the underground Haganah at the time of the British mandate in what was then Palestine.

“It was the British who screwed this up. They should have divided the land between the Jews and the Arabs but they didn’t.”

The United Nations voted in 1947 to partition Palestine into Jewish and Arab states. Rejecting this, the Arabs went to war, and were beaten back by the Jews who, on the war’s conclusion, founded the State of Israel on expanded borders.

“I didn’t agree with that. But our government agreed.”

“And then of course I was in the 1948 war, and got wounded,” he says, squeezing his knee. The war that created the state of Israel, he means – when many Arabs were expelled from Jaffa and some ended up as refugees in Gaza.

Emanuel’s big sculpture “Boat”, carved out of steely grey basalt from the valley of the Sea of Galilee, sits in the Tel Aviv Museum of Art.

Older now and with a bad shoulder, he carves smaller sculptures in his railway wagon and watches the world go by.

Sunday was the fourth straight day of sirens followed by explosions in the greater Tel Aviv area, as Gaza’s militants display their new menace in the form of rockets that can reach the Israeli metropolis, or at least its southern end.

Startled Israelis strolling along the popular Jaffa promenade don’t know where to run for safety. There are no bomb shelters like in the towns down south next to Gaza where Palestinian rockets have been a fact of life for eight years.

They stop, then hear the bang, and look up at the sky and point. Then stroll back to their cars or take another photograph of the kids by the seaside.

Old men who daily play backgammon and fish from the seawall don’t bother much to jump for cover when the siren goes. Or they crouch a bit, on creaky knees.

“This will go on forever,” says Emanuel.