Could Plan for E1 Be Just a Bluff? 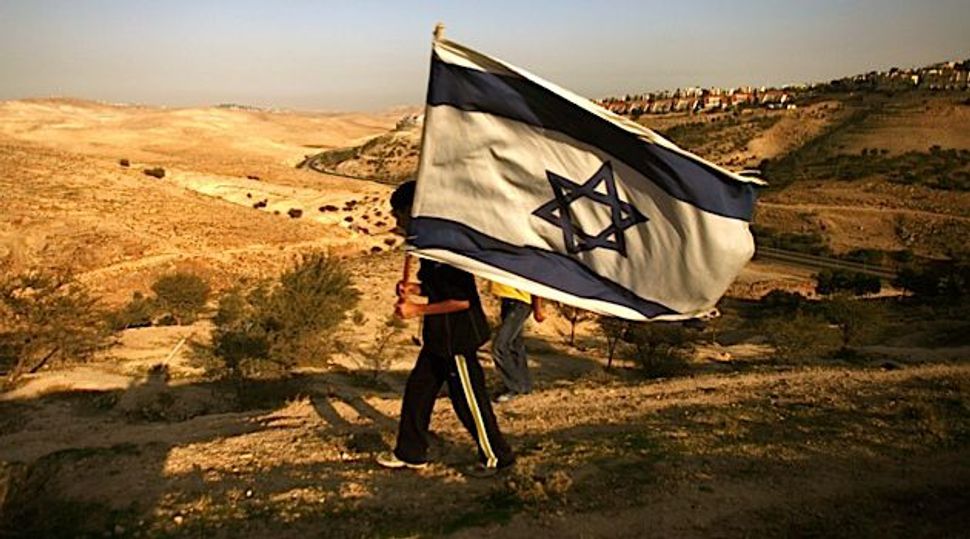 Staking Claim: An young settler plants an Israeli flag in the E1 area, just outside of Jerusalem. Image by Getty Images

For Israelis living at the epicenter of the settlement-building storm, there’s widespread suspicion that Bibi is bluffing.

For all the fury at Prime Minister Benjamin Netanyahu’s intention to approve 3,000 new units in areas that Israel captured in 1967, it was another, vaguer part of his building plan that riled the international community.

This was the decision to finally promote the two-decade-old plan for the development of E1, a 4.6-square- mile piece of the West Bank just outside Jerusalem, next to the settlement of Ma’ale Adumim. U.S. State Department spokesman Mark Toner has been quoted calling the E1 plans “especially damaging” to the prospects of restarting negotiations for a two-state solution. On December 5 Israel’s state planning committee for the West Bank accepted the deposit of blueprints for a large project there, marking the start of a long zoning and planning process that is necessary before any building starts.

This is a move that residents of Ma’ale Adumim have long been hoping for, as it will connect their community more closely to Jerusalem by continuous Jewish settlement. Some even dream that Jerusalem’s light railway will extend there.

Conversely, Palestinians have long been dreading the possibility of this expansion, saying that the location is so important to them that Israeli building there could sound the death knell for their hopes of a viable state.

But on December 4, as the flurry of condemnation for Netanyahu’s decision continued, Ma’ale Adumim residents were skeptical that E1 would really be built. “It isn’t the first time I’ve heard it and nothing happens,” Lev Triskunov, a 55-year-old engineer, complained, adding, “All our government knows how to do is talk.”

Sasha Yofe, a 16-year-old high school student, said of Netanyahu: “He’s showing he’s a tough person, but he won’t do it. There are too many people pressuring him not to; he’s saying it to look good.”

Yuval, a 38-year-old teacher at an Orthodox academy who declined to give his last name, said: “You can never understand Bibi. He has a lot of ideas. Sometimes he just speaks to send a message, and sometimes he acts. My feeling is that if he was really serious, he would have done it without talking. He yells to the outside that he will build, but he doesn’t do it.”

Ma’ale Adumim couldn’t be more different from the caravans-on-a-hilltop stereotype of settlement. It is a busy city of almost 40,000 people, many of them nonideological and attracted to the place because of lower house prices and cleaner streets than in Israel proper. Several locals asked by the Forward to comment on E1 wouldn’t because, they say, they don’t follow the news or care for politics. Apart from the absence of Christmas decorations, the city’s main mall looks like any number of American malls and, with its smart appearance and large chain stores, is indistinguishable from any other Israeli shopping center.

But while Israelis may think of Ma’ale Adumim as “settlement lite” because of its close proximity to Jerusalem, it is precisely this disregard for its strategic position that so enrages Palestinians.

According to virtually every permutation of the two-state solution, East Jerusalem would be the capital of a Palestinian state, and a major economic center. But a question mark hangs over where East Jerusalem can expand, and E1 appears to be the only option — hence the claim by the Palestinians that building on E1 would kill their capital before it is born.

The Old City is surrounded on three sides by Jewish suburbs, with pockets of Arab residence. To the north there is Ramat Eshkol and French Hill, to the west is the majority of Jerusalem’s Jewish population, and to the south is the City of David, an archaeological park run by settlers; the Mount of Olives; East Talpiot, and Har Homa. Only to the east is there significant room for expansion — and for the all-important transport links to connect the Palestinian cities of the West Bank.

In Az Za’ayyem, an Arab village in East Jerusalem, Ashraf Khatib, adviser to Chief Palestinian Negotiator Saeb Erekat, pointed to E1, saying that if it is built, his future capital will end where he was standing. “It’s not only about politics — this is about the future growth of the Palestinian people,” he commented to the Forward.

In Ma’ale Adumim, residents suggested that it’s precisely the Palestinian reliance on E1 that caused Netanyahu to advance plans for it. Several residents related to the prime minister’s move by way of the parable in which a wise man tells a family complaining that its house is too small to take in a goat. Then, when the family gets rid of the animal, the house suddenly seems larger.

“It’s like entering a goat,” said Moshe Yaakov, a man in his 50s. He thinks that the specific reason Netanyahu announced the E1 plan was so that it can later reverse it and incur the goodwill of the international community, or win concessions from the Palestinians for doing so.

Shlomo Ashkenazi, 66, believes that though Netanyahu is well aware that international pressure would ultimately prevent him from building on E1, he wants to use the threat to give the Palestinians a sense of urgency to return to the negotiating table.

“He knows there will be [international opposition that he can’t withstand], but he’s saying it to pressure the Palestinians to agree to a just peace,” said Ashkenazi, who also invoked the goat idiom. Ashkenazi’s definition of a “just peace” is one that involves Israel keeping hold of the large settlement blocs, including Ma’ale Adumim.

Triskunov suggested that Netanyahu made the E1 decision “for the elections,” as it would entice right-wing voters. One such undecided voter said that it would sway her. “If he’s strong and stands on his word, I’ll vote for him,” said Esther Shalom, 67. Shalom is taking Netanyahu at his word regarding the expansion of her settlement to E1. “I think he’s very serious,” she said.

While most Ma’ale Adumim residents want E1 built, not everyone does. Israel Melnik, a 54-year-old who works in security, said: “If you build in E1, we’ll cut between the west and the east, and if you want peace, I think this is a bad thing.” He wants to see a two-state solution.

Judy Berger, a pharmacist who has lived in Ma’ale Adumim for 27 years, admits some reticence for a simpler reason. “On the one hand it should be done, and on the other hand it’s going to ruin my view,” she said.

Could Plan for E1 Be Just a Bluff?