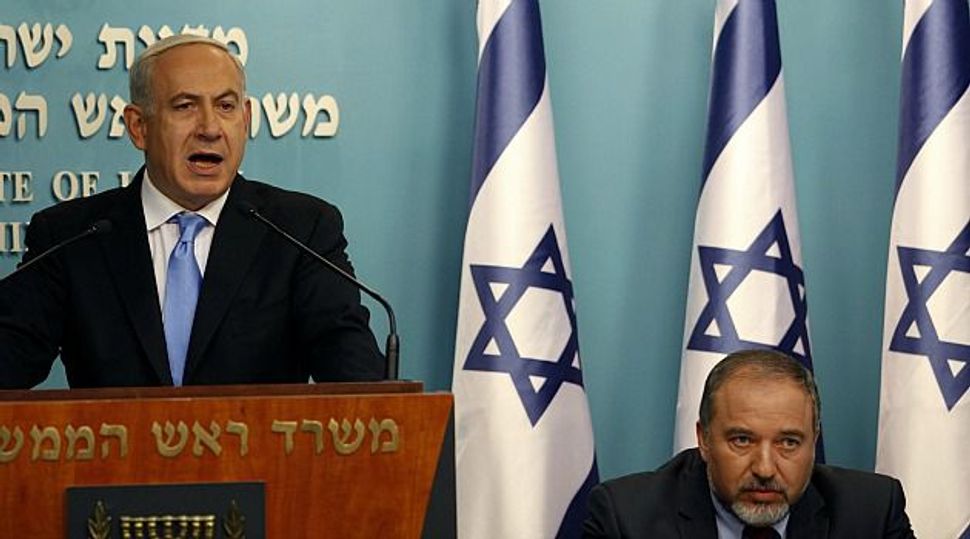 The fast-shifting Israeli political scene has U.S. policymakers fearing the worst for the peace process after the January 22 elections. Image by getty images

Election fever in Israel has Americans playing catch-up in an attempt to grasp the country’s political shifts and realignments.

The Israeli elections, scheduled for January 22, 2013, will feature a Likud list dominated by representatives of the right wing and the settler communities, and a fractured political center that is split into four competing parties. With pollsters predicting a win for Benjamin Netanyahu’s Likud-led coalition, Washington is faced with a new Israeli political map in which the Israeli-Palestinian peace process is largely off the table both for the ruling party and for many of the centrists for whom America had quietly cheered in the past.

“For those who follow Israeli politics, there is some nervousness,” said David Makovsky, an expert on Israel at the Washington Institute for Near East Policy who noted that only a few names on the new Likud list are supporters of the two-state solution for the Israeli-Palestinian conflict. “This makes people here wonder where Israel is heading,” he said.

UPDATE: Israeli Foreign Minister Avigdor Lieberman resigned after being charged with fraud and breach of trust. Lieberman later vowed to continue to run in the January elections, and suggested he would aim to return in a high government post.

In the upcoming elections Netanyahu’s party will run in a joint list with Yisrael Beiteinu, led by ex-foreign minister Avigdor Lieberman, a hard-liner known for his tough approach to any compromise with the Palestinians, and who in the past advocated a transfer of Israeli Arabs to a Palestinian state.

In his term as foreign minister, Lieberman did not deal much with relations between Israel and the United States, mainly because of Israeli concerns that his views would put a strain on the already tense relationship between Netanyahu and President Obama. But recently, with Lieberman settling in as Netanyahu’s second in command and potential successor, the straight-shooting foreign minister made a trip to Washington in which he dispelled any speculation that climbing up the political ladder in Israel would bring about any change in his tone.

Speaking at the Saban Forum on November 30, Lieberman made clear that he does not envision any chance for renewing peace talks with the Palestinians in the near future, and he argued that expanding settlement activity in the West Bank is Israel’s right.

New Yorker Editor David Remnick, who attended the forum, later wrote about a “great deal of despairing hallway talk about the state of Israeli politics” among Americans with ties to Democratic administrations, pointing not only to Lieberman, but also to the lack of any centrist alternative in Israeli politics.

Some of the leading moderate voices within the Likud, including Cabinet ministers Dan Meridor and Michael Eitan, lost their primary bid and will not be part of the joint list, now called Likud-Beiteinu, in the upcoming elections. On the other hand, representatives of the settler movement and opponents of a two-state solution dominate the list.

Among them is Knesset member Danny Danon, who made it into the top 10 on the joint list and is likely to land a Cabinet post after the elections. Danon toured the United States in September, promoting his latest book and arguing, weeks before the presidential elections, that “Barack Obama is no friend of Israel.”

This could cause problems for Danon and his party in Washington down the road, but it did not seem to affect the young Knesset member’s fundraising efforts in the United States. Danon raised more than $90,000 from American donors during the recent primary election cycle, a higher amount than any other Israeli politician.

And while most Israeli candidates turn to members of the American Jewish community to fund their primary bids (non-Israeli citizens can donate only to primary races, not to parties running in the general elections), Danon succeeded in carving his own niche, tapping into a previously unknown reservoir of support. According to Israeli State Comptroller records, Danon raised $26,280 from Arkansas residents, most of them living in Fayetteville, and some involved with Christian organizations supportive of Israel.

“I am thankful to my supporters from Israel and abroad who support my policies and the clear and unapologetic way in which I state my positions on behalf of the State of Israel,” Danon said in a statement provided by a spokesman.

And while the Likud’s step to the right has raised concerns that the peace process will be sidelined, Washington perceives that the condition of Israel’s center and center-left — once viewed as a political ally in the quest for negotiations with Palestinians — spells a bleak future for chances of reaching an agreement in the coming years. Until recently, the Israeli center was dominated by Labor — the historic political home of the late prime minister Yitzhak Rabin and supporters of a negotiated two-state solution — and by Kadima, which was formed by former prime minister Ariel Sharon and was also viewed as the driving force for renewing peace talks.

This, however, is no longer the picture. Labor, under the leadership of Shelly Yachimovich, has shifted its focus to social issues, making the Israeli-Palestinian conflict a secondary task. Kadima, now led by Shaul Mofaz, has been weakened to the point of becoming almost irrelevant. And two new parties joined the crowded center: Yesh Atid, a party founded by TV personality Yair Lapid that does not hold strong views regarding the peace process, and Hatnua, a party founded and led by former foreign minister Tzipi Livni, which has vowed to make peace negotiations a top priority but has yet to prove its political power.

“For Americans, what is most bewildering is that one party is playing baseball, the other is playing football and the third is playing basketball,” Makovsky said. “It is not clear what these elections are about.”

These shifts in the right and center mean that hope for an Israeli government that will put peacemaking high on its agenda has diminished in Washington.

“There’s no doubt that if American administration officials could vote, they’d choose Livni in the ballots,” said Dan Arbell, scholar in residence at the department of history and the Center for Israeli Studies of the American University in Washington. “Americans would like very much to see Livni inside the next coalition in Israel, in order to give some chance for moving forward the peace process.”

But while for some in the foreign policy community the upcoming Israeli elections are a source of anguish, Israel’s vibrant political system offers many opportunities for political consultants now available after the American presidential battle. Most major parties in Israel have already signed up American political consultants and pollsters to help win voters.

Likud Beiteinu will work with Bill Knapp, who assisted Netanyahu’s campaign in 2008, as well as with longtime adviser Arthur Finkelstein. Labor has enlisted Stanley Greenberg, a Democratic pollster who has worked with the party in previous campaigns. Lapid’s Yesh Atid party hired the services of Mark Mellman, and Kadima will work with David Eichenbaum, who was recently involved with the pro-Obama super PAC Priorities USA.

Activists within the Jewish community who in the past doled out financial contributions to Israeli politicians were less involved in this election cycle. With the exception of Danon, donations to Israeli politicians remained low. Candidates running on the Likud list benefited mainly from contributions made by members of the Florida-based Falic family, which is also Netanyahu’s largest donor, and from several other longtime Likud donors.

Competing for a seat on the Labor list, activist Stav Shaffir, who was among the leaders of the 2011 social protest, sent out an email appeal to American donors in which she argued that American money should not go only to right-wing candidates. “I don’t believe supporters of Netanyahu are the only Americans who care about Israel.

Please support my campaign, stand behind your values and help bring a progressive voice to the Knesset.” Shaffir’s appeal seems to have worked: She raised more than $10,000, and won a safe place on the Labor list.