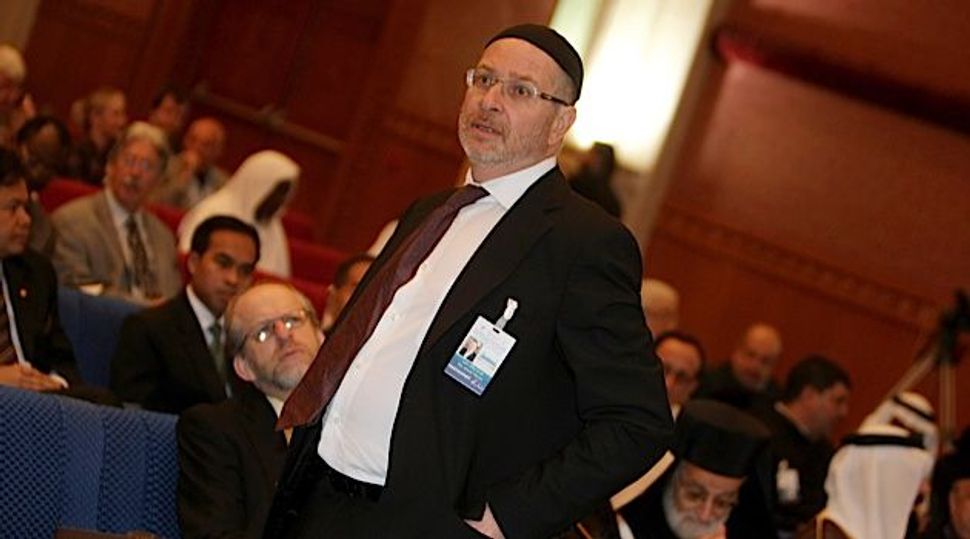 From the Pulpit: Rabbi Rolando Matalon is beloved at BJ. Image by Getty Images

The turmoil appears to be continuing at one of Manhattan’s most prominent synagogues following a public statement by its rabbis embracing the recent United Nations resolution recognizing Palestine as a nonmember observer state.

Rabbi Rolando Matalon, one of three co-rabbis at B’nai Jeshurun, read from the pulpit a carefully worded apology for the recent email letter the rabbis sent out hailing the November 29 U.N. General Assembly resolution.

Matalon read his latest statement out loud at Friday evening Sabbath services December 14 before hundreds of congregants, according to members of the synagogue.

Though the U.N. resolution passed overwhelmingly, 148 to 9, the rabbis’ email statement stood in contrast to the positions of Israel, the United States and most of the organized Jewish community, all of which opposed the G.A. initiative.

Neither Matalon nor his two co-rabbis, Marcelo Bronstein and Felicia Sol, responded to multiple telephone and email messages from the Forward seeking information about the recent apology and what motivated it. Denise Waxman, B’nai Jeshurun’s communications director, would not provide a copy of the text. Jeannie Blaustein, president of the congregation’s board, did not return several phone messages seeking comment.

One longtime member who spoke with Blaustein about the apology told the Forward that Matalon “expressed his profound apology for the way the letter was crafted. Much of what was said in it was what they wanted to convey…. But the rabbis didn’t do their due diligence. There were things they wanted in the letter that didn’t get in there.”

The congregation member, who was not present at the Friday night services, declined to be identified, because the information the member had on what happened was based on private conversations with Blaustein and others who were there.

B’nai Jeshurun member Todd Chenko, who attended the synagogue December 14, declined to talk about Matalon’s apology, except to say, “I think the whole situation is very upsetting because of the drama that ensued.”

The rabbis’ original email, sent to the congregation November 30, was from the beginning highly controversial. It described the U.N. vote to grant Palestine non-member observer state status as “a great moment for us as citizens of the world.”

“This is an opportunity to celebrate a process that allows a nation to come forward and ask for recognition,” the email said. Referring to Israel’s founding, which also was accompanied by a formal vote in the U.N. General Assembly, it added: “Having gained independence ourselves in this way, we are especially conscious of this. Every people has the right of recognition.”

Less than a week after the email was sent, The New York Times published a front-page story that quoted members of the congregation as being divided on the announcement. The story led to another email the following day, in which rabbis Matalon, Bronstein and Sol wrote that an unedited version of the original email was sent out mistakenly. The rabbis further said that the congregation’s president and executive director, whose names were included as signatories on the letter, had never approved the statement. Nevertheless, the three rabbis affirmed “the essence of our message.”

Matalon’s public declaration from the pulpit December 14 at the congregation’s most heavily attended weekly services seemed to signal that he and the other rabbis wanted to take their apology to a higher, more prominent level.

Alan Ripp, a member of B’nai Jeshurun who did not agree with the rabbis’ initial email, said: “I love the community, I love the shul. I have great affection for the rabbis. They have far greater wisdom than I do, and dedication, but they have very strong, outspoken points of view on Israel that I don’t think they realize many of their members don’t share. I want the best for this congregation.”

The rabbis’ apology from the pulpit took place as a group of B’nai Jeshurun members was organizing to press the synagogue to establish clear policies on the rabbis’ future freedom to speak out unilaterally on public issues.

Sally Gottesman, a vice president of the synagogue board who supports the rabbis’ stand, indicated she thought the group, which reportedly includes some important donors, was having an impact. “I think they are putting on real pressure,” she said. “Minority voices often know how to make their voices heard. As they say, the squeaky wheel gets the grease.” Gottesman stressed that she was addressing the issue only in her personal capacity as a congregation member, not in her official role with the synagogue board.

Marvin Davis, who is a Manhattan real estate mogul and one of the reported key members of the ad hoc group, declined to comment on the matter when reached by the Forward.

Another individual involved with the group, who would speak only on condition of anonymity, described it as an informal “group of wealthy people.”

“They like BJ,” this source said, “but they are very unhappy. But instead of walking away, they’re meeting and asking what can be done.”

So far, the source related, the group has met several times, most recently on December 9.

The source said that the “agenda is to draft some kind of guidelines for the synagogue on appropriate behavior when sensitive issues come up that the group would present to whatever governing body would be appropriate — the board, executive committee.”

Now, partially in response to the efforts launched by the ad hoc group, Gottesman plans to meet with the rabbis in early January with about 100 members who support their stand.

“I think what’s true is that everybody loves the congregation and feels a lot of ownership, attachment to the congregation,” she said. “There are people, who are in the majority, who have been silent because we realize the rabbis were under pressure. These include major donors of the shul who wrote the rabbis last week and plan to meet with them and support their right to speak freely.”

Neither of the two major non-Orthodox rabbinical associations maintains formal policies on the right of rabbis to speak freely from the pulpit. But both the Rabbinical Assembly, which represents the interests of Conservative rabbis, and the Central Conference of American Rabbis, a Reform rabbinical group, support their freedom to do so in principle.

“I believe freedom of pulpit is core to rabbinic leadership,” said Rabbi Steven Fox, chief executive of the CCAR. “Being a rabbi is not always being in a position of the most popular person.”

Jonathan Sarna, the Joseph H. and Belle R. Braun Professor of American Jewish History at Brandeis University, said that in early Sephardic congregations, the cantor had to submit his words to the leadership of the congregation before they were delivered. “These battles over the freedom of the pulpit have really been a fixture in American Jewish life for almost as long as we’ve had rabbis,” Sarna said.