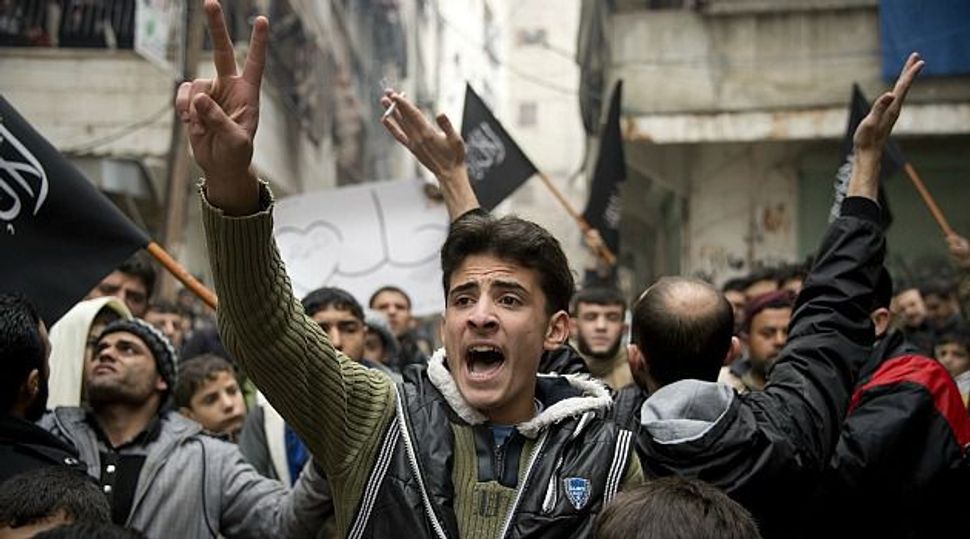 Future Leaders?: With Syrian rebels close to tipping the balance against strongman Bashar al-Assad, Jews are starting to think about their next steps. Image by getty images

As the days of Syrian dictator Bashar al-Assad increasingly look numbered, Jewish and pro-Israel activists are starting to grapple with the question of who will be in power after he’s gone — and whether they should reach out to them and how.

At this stage, sporadic contacts between Jewish activists and Syrian opposition figures are driven primarily by fear of regional instability and the possibility of proliferation of chemical weapons held by Assad. Talk of future relations between a new Syria and Jewish supporters of Israel is currently being brushed aside.

Still, some Syrian activists struggling for recognition of their fight to topple Assad recognize that their stance toward Israel may be a factor in their efforts to enlist international support.

“There are many in the opposition who believe that Israeli concerns over change in Syria are, in part at least, behind the lack of a more proactive response by the international community to the situation in Syria,” said Ammar Abdulhamid, a Syrian pro-democracy activist. Abdulhamid is a fellow at Foundation for Defense of Democracies, a non-partisan Washington think tank that serves as an academic home for many neo-conservative thinkers. The group has emerged as one of the key players in forging ties with the budding Syrian opposition and urging a more active U.S. role in bringing about the demise of the Assad regime.

A December 6 conference near Capitol Hill organized by FDD gave voice to those, both on the Syrian and the American side, who believe the Obama administration should get more deeply involved in shaping Syria’s future.

“The U.S. has subcontracted our diplomacy to other parties,” said FDD senior fellow John Hannah, a former foreign policy adviser to Vice President Dick Cheney, at the event. Rafif Jouejati, a spokeswoman for the Syrian Local Coordinating Committees, a network of opposition groups active on the ground in Syria, told listeners in the capacity-filled conference room that lack of active U.S. support for the Syrian opposition “looks to the world like support for the Assad regime.”

The Obama administration’s approach on this issue has been evolving. On December 12 the United States officially recognized the Syrian Opposition Coalition, a representative body made up of rebel factions on the ground and their supporters outside Syria, thus paving the way for active American support.

Through the U.S. Institute of Peace, the administration has been working with Syrian opposition figures outside the country in an attempt to come up with ideas for “day after” scenarios, touching on many of the issues a new Syria will have to deal with. These include maintaining the rights of the minority Alawite sect from which come Assad and many of Syria’s other top officials; setting rules for dealing with former Assad regime members, and building a democratic structure.

Notably absent from most discussions of Syria’s future is the question of its relations with Israel. During the run-up to the 2003 Iraq war, Jewish groups spoke at length with Iraqi opposition figures — in particular the U.S.-based activist Ahmad Chalabi — about a new era for Israeli–Iraqi relations once Iraqi dictator Saddam Hussein was ousted. But the war’s aftermath brought only disillusion on this front; Chalabi not only failed to attain supreme leadership of the country—he moved close to Iran, Israel’s most bitter adversary, in his struggle to increase his power.

Later, the Arab Spring made it clear that Arab democracy does not necessarily entail more openness to relations with Israel, at least in the absence of any progress on the Israeli-Palestinian front and other territorial disputes between Israel and its neighbors.

“The agreed line by the opposition is that the status quo in the Golan Heights will be maintained until conditions permit for organizing peace talks,” said Abdulhamid, referring to Israel’s occupation of that area since the 1967 Six Day War.

This approach could satisfy Jewish and pro-Israel groups whose focus on Syria’s future government in any event prioritizes other concerns.

The American Israel Public Affairs Committee in a recent memo focused on the danger Israel faces from Syrian chemical weapons stockpiles and ballistic missiles, which are believed to be capable of targeting central Israel. The three talking points issued by AIPAC call for international pressure to stop human rights abuses by the Assad regime, for an end to Syria’s support for anti-Israel terror groups, and for an international drive to investigate the country’s illicit nuclear program.

These concerns echo to a great extent voices heard in Jerusalem. According to reports, Israeli Prime Minister Benjamin Netanyahu made a secret visit to Jordan in December to discuss cooperation with Jordanian King Abdullah on countering the threat of Syrian chemical weapons being used by Assad or falling into the wrong hands once he’s out of office.

Israel is also concerned about the growing influence of foreign jihadist groups that have infiltrated Syria as the civil war there has progressed. A December 21 paper prepared by the Jerusalem Center for Public Affairs, a hawkish Israeli think tank close to Netanyahu that focuses on security issues, warns that after Assad’s fall, “a potential military-terrorist threat to Israel will likely emerge in the transition period, which will be marked by governmental instability and a lack of central control over at least some of the fighting forces.”

Syrian opposition activist Radwan Ziadeh argued that such concerns should not deter the community from getting involved. “It is better to invest in the future than to hang on to the old regime,” said Ziadeh, director of the Syrian Center for Political and Strategic Studies in Washington. In his meetings with members of the Jewish community, Ziadeh talks about the role he sees for American Jews in helping the Syrian cause. “Now is the time for the Jewish community and for Israel to push the Obama administration to take action,” said Ziadeh, who supports American military intervention aimed at helping the opposition—a position rejected by mainstream Syrian government opponents.

Despite American Jewish concerns and Israel’s relative comfort with the Assad regime as the devil it knows, some Jewish groups are, in fact, reaching out to Syrian opposition, based on a joint humanitarian cause.

The American Jewish Committee, which has hosted several events with Syrian dissidents, is active in bringing to light abuses carried out by the regime. “The options for Jewish groups as Jewish groups are relatively limited,” said Felice Gaer, director of the AJC’s Jacob Blaustein Institute for the Advancement of Human Rights. “They cannot reach a peace agreement and will not solve the Syrian problem. But they can call for humane principles in the conduct of the government and those rebelling against it.”

Gaer, who is also a commissioner on the United Nations Committee Against Torture, said that the Jewish community has a role to play in telling the world about “how brutal and vicious this conflict is and how brutal the government is in its use of torture.”

But intervention by Jewish activists can, at times, be used against those it aims to help. When Bernard-Henri Levy, a Jewish French philosopher, called for international intervention to help oust Assad, members of left-wing Syrian opposition groups criticized his efforts and pointed to his support of Israel as an incriminating factor.

“Jews will always be used by one side or another” in the conflict, Gaer argues in response. But the circumstances in Syria are so harsh and clear, she said, that there is no room for concern about Jewish support de-legitimizing the opposition. “If we speak to this issue we will not hurt the effort,” she said. “Turning an eye away from what’s going on, that is what can be seen as not legitimate.”