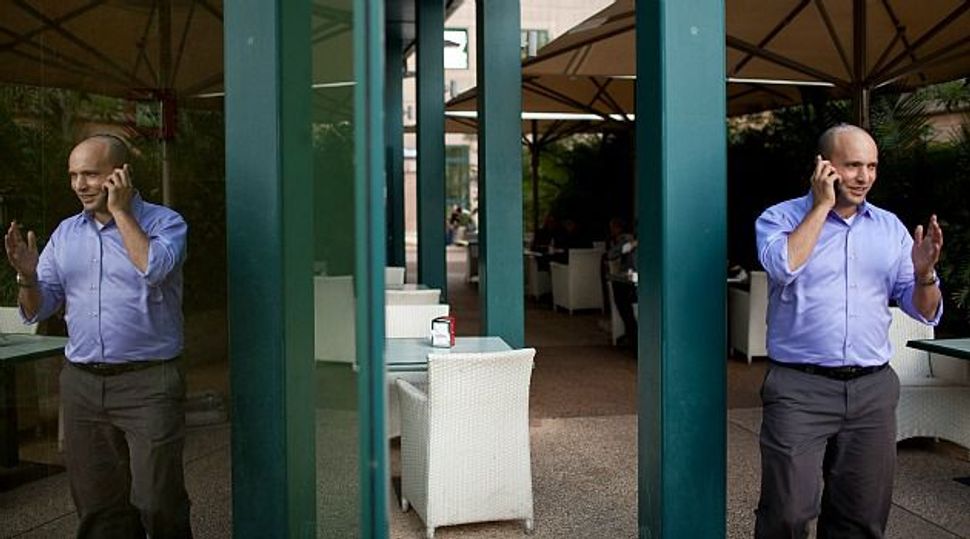 The Right Look: Naftali Bennett looks more like a high-tech millionaire than a hard-right Israeli politician. And that?s the point. Image by getty images

In 2010, the Forward profiled Naftali Bennett, who has emerged as the biggest surprise of the current Israeli election campaign. He was a man with a vision — but also with a problem.

The pro-settlement politician was starting to appeal to the hearts and minds of his constituency, but plenty of would-be followers had trouble taking him seriously.

Daniella Weiss, former mayor of Kedumim in the West Bank and an icon of hard-line settlers, spoke for many at the time when she said she regarded him as an “outsider.” Bennett was at the time CEO of the Yesha Council, the main settler umbrella organization, and Weiss said that he wasn’t qualified for the job.

Bennett, now leader of the Jewish Home Party, which is expected to place third in the January 22 elections, is a self-described “moderate Orthodox,” and his wife is secular. He grew up in Haifa and lives in affluent Ra’anana — both of them far from the territories. Yet he has managed to unite the previously fragmented Religious Zionist camp, something that prestigious rabbis failed to do ahead of the last election.

The story of Jewish Home’s rise under Bennett is the story of a major change in the nature of Religious Zionist politics. After near obliteration in the 2009 election, the faction — until that year it was known as the National Religious Party — realized that it had to modernize or die, and that the expectation that it would receive the Religious Zionist community’s votes out of a sense of loyalty was outdated.

A relatively closed clique ran the party: leaders were not elected but chosen and while there was some reform in 2008 and 2009, it was limited. This campaign season began, for the first time, with primaries, allowing Bennett, a previously unknown quantity in Jewish Home, to convince members to entrust the party to him. “Everything that happened now is what we wanted four years ago,” revealed Asher Cohen, who was a member of Jewish Home’s public committee in 2009.

Cohen was talking about not only elections, but also what they brought about — a young energetic leader who won back many Religious Zionists who had started voting for larger parties, and one who made the strategic move of including a secular candidate, Ayelet Shaked, and securing nonreligious votes.

Former NRP head Yitzhak Levy, who represented the party in the Knesset for two decades, said that he has watched the recent surge in popularity with amazement, admitting, “Bennett succeeded where we couldn’t, by bringing a lot of non-Orthodox yet traditional people to the party.”

But beyond the democratization of the party and Bennett’s innovations, there is a deeper story of Religious Zionist identity at play.

The NRP has long been right wing on settlements, but not on social and economic policy. Zevulun Orlev, the party’s most prominent politician in recent decades whom Bennett defeated in the primary and caused to retire, was decidedly left leaning in this area. Bennett, by contrast, is a neoconservative high-tech millionaire whose political platform includes significantly weakening trade unions.

In 1999, Bennett co-founded Cyota, a company that develops anti-fraud software, and became its CEO. He sold the company in 2005 to RSA Security, based in the United States, for $145 million. With no need to make any more money, he moved into the political realm. He became chief of staff to Benjamin Netanyahu, who at that time was the opposition leader.

Bennett’s combination of religious ideology and entrepreneurship is “capturing the imagination of the people,” said the veteran commentator on the religious Zionist community, Bambi Sheleg. Religious Zionists have become less interested in social welfare over time, and Bennett offers an expression and role model for this identity. He presents a path for the Orthodox sector to pursue individualism, while retaining ideals regarding religion and settlements.

Amir Paz-Fuchs of Ono Academic College, one of Israel’s leading scholars on social and welfare platforms, commented, “In the past you could always count on [the party] to oppose threats of privatization, on threats to the welfare state and the problem of inequality, but now it’s just like religious Likud.” He was alluding to Likud’s strongly free market bent.

In a sense, the Bennett era is phase three for Religious Zionist politics. During the first phase, the party was essentially a continuation of the pre-state Religious Zionist movement, headed by leaders from the days before independence, and focused on the religious character of the Jewish state.

After the Six Day War of 1967, a new generation took over. It shifted the party to the right, and its main battle became building and maintaining settlements. “Since the revolution of the late 1960s, Bennett is the biggest revolution in the party,” said Tamir Sheafer, a political scientist at The Hebrew University of Jerusalem.

The leaders from the late ’60s to now, with one exception, were educators who were respected inside their community but largely relied on a sense of communal loyalty from voters rather than an ability to generate enthusiasm, and had little if any appeal to the non-Orthodox. The sleek 40-year-old Bennett, by contrast, embodies the “Start-up Nation” phenomenon, wooing Religious Zionists who had wandered from the party, and non-Orthodox voters who have never before considered it. “The appeal is that he doesn’t look like a settler but a young successful Israeli, and isn’t afraid of expressing very strong positions and attacking Netanyahu,” Sheafer said.

For all Bennett’s attributes, his success has hinged on the unprecedented unity among the Religious Zionist leadership. The Orthodox media has carried advertisements with dozens of rabbis, ranging from moderates to hard-liners, declaring their support for him, and there have been hardly any attacks on his moderate religious views.

This appears to be the result of lessons learned from the nightmare scenario for the party in the last election: It had announced a grand re-branding and merger with other Religious Zionist factions, but disagreements over details led to the mergers falling apart and to Jewish Home, which was merely a renamed NRP, being punished at the polls and receiving just three of the 120 Knesset seats. This time around, it has merged with other factions from the National Union Party, and any internal disagreements that have arisen have been muted.

Bennett has been working hard to ensure that he pleases the moderates and the hard-liners in the Religious Zionist camp, as well as non-Orthodox potential voters. What appeared to be an unwelcome controversy in late December 2012 helped him with this task. He said during a television interview that his “conscience wouldn’t allow” him to evacuate a settlement if he were asked to do so during reservist duty. Under heavy pressure from other parties, he subsequently retracted his comment.

Instead of suffering in opinion polls, Bennett’s numbers rose. He had demonstrated to the hard-liners despite his Ra’anana residence just how attached to the West Bank he feels, and that he took his conviction on the matter as far as was politically acceptable, while showing others that he knew when to back down. Throughout the campaign, he has been proposing annexing a significant part of the West Bank, but this has received little media attention. His comments on evacuation, however, catapulted him to the top of the news agenda and, after four years of confusion regarding exactly what the party stands for, sent a message that while Jewish Home is still working out its own red lines, its main priority will be territory.

As pollster Rafi Smith put it: “The vast majority of people who define themselves as religious are united by the fact that they are hawkish and believe in retaining the whole Land of Israel, and he has managed to downplay differences in the community and unite people around this.”