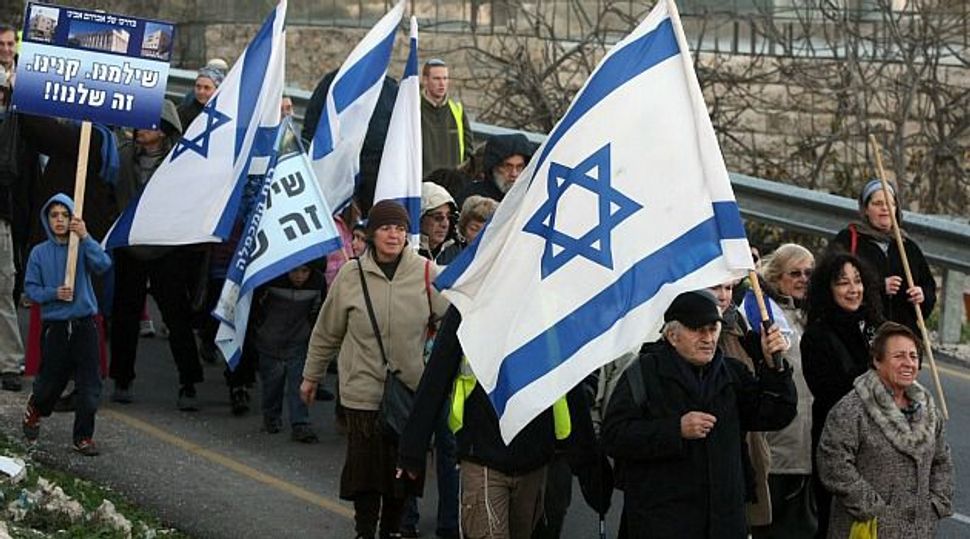 Extreme No More: Jewish settlers march in the West Bank city of Hebron. Once an extremist option, annexation of the occupied territory is now gaining support on Israel?s right wing. Image by getty images

Israel’s prime minister, Benjamin Netanyahu, has been conspicuously silent during the election campaign regarding his plans for the Israeli-occupied West Bank. But some of his close associates have been very open about theirs.

Despite their reputation as two of Netanyahu’s favorites in the Likud party, Yuli Edelstein, a Cabinet minister, and Ze’ev Elkin, chairman of the Likud’s Knesset coalition, have called for gradually annexing the West Bank. And while they have left the details vague, they apparently foresee some Palestinians who live there becoming Israeli citizens.

Though Netanyahu has supported a two-state solution to the Israeli-Palestinian conflict since 2009, the ideas of his two close associates have significant, if still minority, support within the Likud’s Knesset ranks. The annexation move also has the full and vigorous support of the Jewish Home party, the Orthodox Zionist party that is expected to emerge from the January 22 elections as the second-largest party on the right and at least the third largest in the Knesset.

When the right-wing activist group Women in Green organized a special pre-election “sovereignty” conference, Edelstein, who is minister of Information and Diaspora, and Elkin addressed the 800-strong audience from the podium. The Jerusalem event was Women in Green’s third “sovereignty” conference — but the first that has attracted ruling Likud party members of this stature.

Polling commissioned by the group and conducted ahead of the conference by The New Wave Research, one of Israel’s largest polling companies, concluded that 73% of Israelis who consider themselves right-wing support annexation. Only 9% opposed the idea.

Elkin declared that he considers the interest in annexation a “revolutionary trend.” Stating that Israeli policy toward the West Bank softened in the early 1990s, he commented, “I think the public in the State of Israel today is mature enough to see that conducting ourselves in such a way has brought nothing positive and has brought many problems.”

Edelstein suggested that Israel would assert Jewish claims over the West Bank if it annexed, “sending out an important message to the international community.” It would “put an end to that discussion,” he said, referring to any contestation that Jews have a connection to the territory.

Women in Green co-chair Nadia Matar said that the annexation discussion is important because for too long, the right failed to give clear answers on its alternative to negotiations. “Everybody understands that the two-state solution is national suicide, but we can’t leave a vacuum,” she claimed in an interview with the Forward. “What we are calling to do was done 45 years ago in Jerusalem, when everyone said the skies were going to fall in — and they didn’t.”

Advocates of annexation vary in their view of Palestinian rights once the West Bank becomes part of Israel. During a panel discussion at the conference the opinions ranged from granting full citizenship to granting only permanent residency. The settlement activist Elyakim Haetzni advocated allowing Palestinian autonomy, and Otzma Yisrael party candidate Arye Eldad suggested giving residency, but demanding national voting rights for Palestinians in Jordan. Edelstein and Elkin did not take part in this discussion, and therefore did not outline their views on the subject, but they said nothing during their speeches to suggest that they saw West Bank annexation differently to annexation in Jerusalem, where Palestinians are able to apply for citizenship.

With little if any movement in the electorate between the left-wing bloc of parties and the heavily favored right-wing party blocs, the election campaign has focused mainly on electioneering within the blocs. And the main battle has become that between the Likud-Yisrael Beiteinu alliance and the Jewish Home Party to its right.

This has put annexation — only a theoretical possibility for the future — firmly on the agenda, while there has been hardly any discussion of what to do regarding the successful bid to upgrade the Palestinian’s status at the United Nations.

It is the Jewish Home that has been the most vocal about annexation, by enshrining it in limited form in its platform. The Oslo Accords divided the West Bank into three districts. The so-called Area C covers almost two-thirds of the West Bank and contains all the settlements, but it has a very small Palestinian population, and as such, Jewish Home wants to annex the area and grant citizenship to its Palestinian residents.

The Likud ultra-rightist Moshe Feiglin has also ramped up interest in annexation. Feiglin, Netanyahu’s nemesis inside the party who for the first time looks likely to win a Knesset seat, wants to pay Palestinians cash incentives to emigrate, and for the whole West Bank to become part of Israel. Both Feiglin and Jewish Home candidate Eli Ben-Dahan also addressed the Women in Green conference.

Matar said that the annexation lobby is buoyant at the moment, because of the release last July of a pro-settlement government-commissioned report. “The Levy Report is the first step to annexation,” she claimed, pointing out that she subtitled the conference “From the Edmund Levy Report to Sovereignty.” In fact, the Levy Report did not recommend annexation, but it did reach the conclusion that the West Bank is not occupied territory.

Experts point to various other reasons for renewed interest in annexation. Historian Benny Morris said that this is partly due to the 2005 Gaza disengagement. This enabled the right to argue, despite skepticism from the center and left, that Israel could annex all territory it directly controls without creating a demographic catastrophe. This is because the demographic threat is less intense than if Gaza’s Palestinians were annexed to Israel, as well. “It’s true that the withdrawal from Gaza strengthened the right’s annexation argument,” Morris said.

Martin Kramer, senior fellow at The Shalem Center, in Jerusalem, said that in the minds of Israeli Jews, the November operation against Hamas in Gaza “solidified division between the West Bank and Gaza, making Palestinian division look more intractable than ever.” This atmosphere catalyzes support for solutions that deal with only the West Bank, he said.

Kramer believes that the annexation discourse is sometimes used as an outlet for frustration at troubled international relations. Feeling a cold shoulder from the United States and from some other allies overseas, “some Israelis believe that now is the time to implement dreams they have until now kept to themselves.” Political scientist Itzhak Galnoor, a senior research fellow of the Van Leer Jerusalem Institute think tank, offered a similar assessment, saying, “Now, when it’s becoming clearer Israel is isolated, there are those who say let’s go all the way.”

Few analysts believe that the next government will attempt annexation of West Bank territory beyond East Jerusalem — which, though it has not received international recognition, the Israeli government officially annexed soon after the 1967 Six Day War. But it is expected to become a stronger rallying cry of the right during the next Knesset. Kramer believes that it could “be seen emerging in [Likud] party manifestos.”