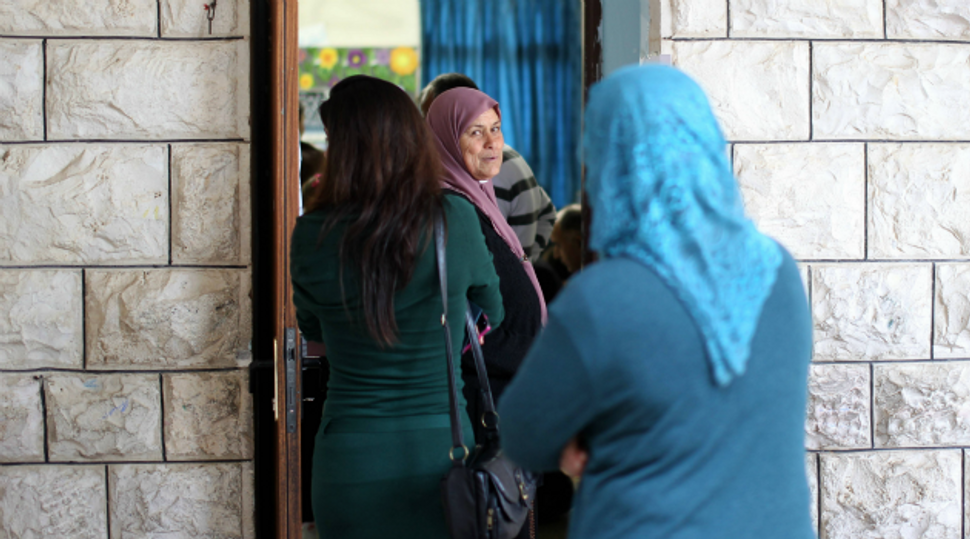 Lining Up: Israeli Arabs wait to vote in elections. Those that voted said they did so reluctantly, with little hope of change emerging from what they branded a ?Jewish game.? Image by getty images

In this city of 20,000 just 20 kilometers east of Tel Aviv, red flags of the Hadash party, a left-wing Arab-Jewish list, fluttered on the main road. Posters elsewhere featured Isawi Freij, a local who is No. 5 on the Meretz party list. Other posters showed Ibrahim Sarsur of the United Arab List, another local, who is also a veteran member of Israel’s parliament, the Knesset.

On the drab, pothole-marked streets of the town, there were also black flags of mourning with the year 1956 written on them, memorializing the 48 civilians who were killed by Israeli border police as they returned from farming their fields after curfew in what became known as the Kafr Qasim massacre on October 29,1956.

Issa Morsi, 40, who owns an electric supplies store, voted on January 22 for the party he always votes for: Hadash. “It is the only party that wants equality and wants the rights of Arabs to be the same as those of Jews,” he said.

The soft-spoken, bearded father of three took strong issue with the view of many Arab citizens who say that there is no point in voting because elections are a Jewish game and will not bring change.

“I want to play this game, too,” he said. “My vote is the same as theirs. The vote is important in order to make a barrier against racist decisions. Every Arab ballot not cast helps the far-right, and this impacts negatively on the Arabs.”

Morsi believes that pervasive anti-Arab racism is the main problem facing Israel’s Arab minority, which makes up one-fifth of the population. “Apply for any job. Submit your résumé,” he said. “As soon as they see you weren’t in the army, you won’t get the job. Schools aren’t the same level as Jewish schools. Compare their budgets.

“Go to the airport. There is not a single time I have gone there and my pants didn’t come down at the orders of security. It’s humiliation.”

Morsi says the goal of the 1956 massacre, in which he lost relatives, was to force Arabs to leave the country. “Today it’s the same goal, but done in other ways by making people’s lives difficult and causing despair. Netanyahu does not want Arabs here.”

By contrast, he said, Yitzhak Rabin, the assassinated prime minister who reached the Oslo Agreement with the Palestinians, was a “man of peace” and “courageous,” he said. “In his days Israel had a future with the Arabs and the Palestinians. This is real strength in my opinion, not Netanyahu’s strength”

Truck driver Maher Budeir said he voted for Meretz, the left-leaning, dovish Zionist party of which he is also a member. Standing outside the stuccoed elementary school that served as a polling station, and holding the hands of his son, Rasmi, 6, and daughter, Lamar, 2, Budeir explained: “Meretz encourages Arabs to participate, and it is the only party talking about peace. It has a program for peace, and it was a driving force behind the Oslo Agreement.”

Budeir views the outgoing Knesset as “the worst Knesset for us ever in all realms.” He cited a law it produced that cuts government funding for any group that commemorates or recognizes the nakba, literally, the catastrophe — a day coinciding with Israel’s independence day that Palestinians mark as a day of mourning for what they view as the loss of homeland that accompanied Israel’s birth.

But the stay-away trend was also apparent. The Forward asked a young woman accompanying her mother to the polls for whom she had voted. She took the journalist’s notebook and wrote: “For us, the elections in Israel are merely a facade of democracy.”