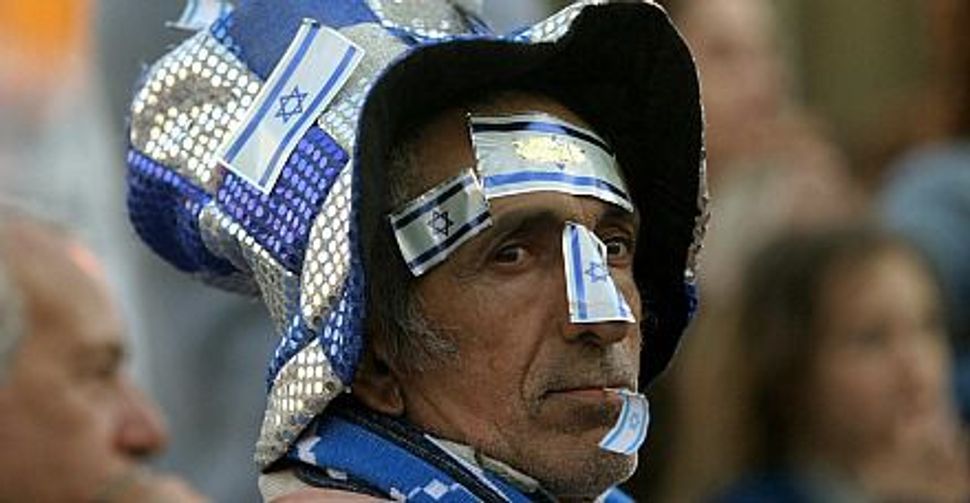 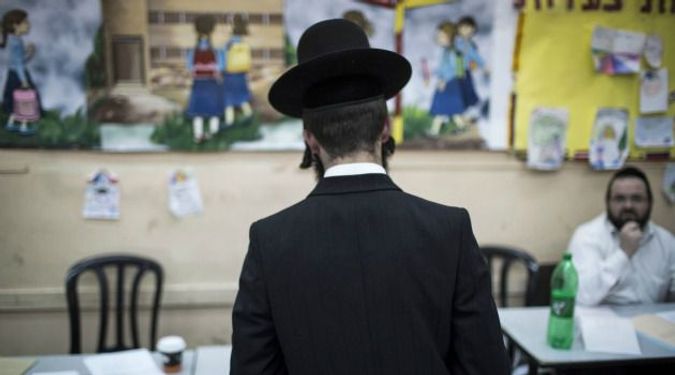 Time for Counting: An ultra-Orthodox man prepares to vote in Israel?s election. From the Mediterranean coast to Hasidic neighborhoods of Jerusalem, everyone had an opinion about what their vote would mean. Image by getty images

All across Israel and in the settlements of the West Bank, Israelis of all social stripes went to the polls. Here are a few or their stories.and their divergent visions of what might emerge from the election.

After a lethargic campaign by their politicians, Israeli voters confounded widespread expectations of a lethargic election in response, instead pushing the mass social protest movement of 2011 to front and center via their ballots.

Last-minute election fever swept the nation, and the turnout, at 66.6%, exceeded the elections of 2009.

As the Forward traveled the country on election day, it was clear that the call for social change went far beyond the success scored by Yair Lapid’s new Yesh Atid (“There Is A Future”) party, which placed second with 19 of the Knesset’s 120 seats; it was an urgent yearning on the part of voters across a wide political spectrum. 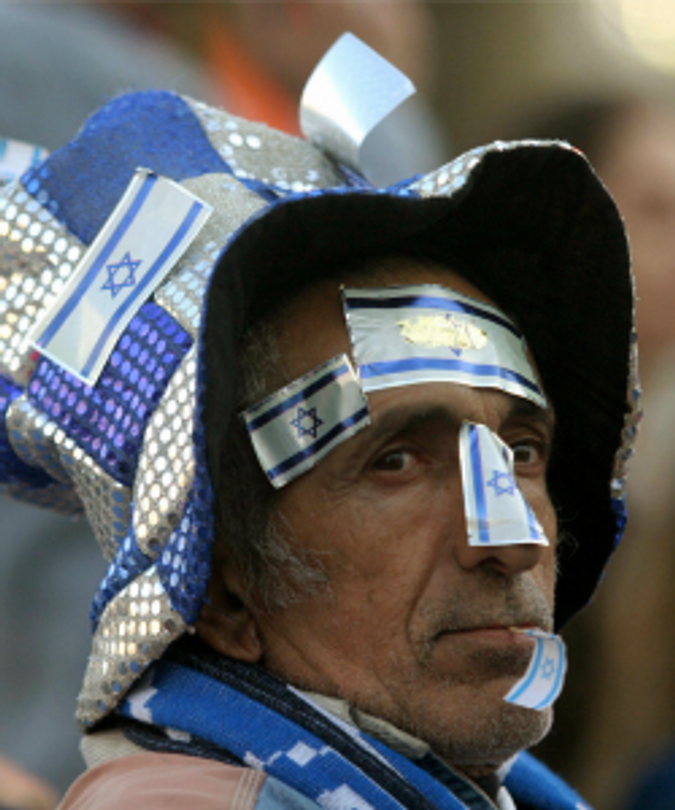 Early election morning in the Galilee the demand for change was evident among the voters, who are feeling overlooked. In Nahariya, one of the region’s largest cities, hardly any candidates have visited during the campaign. Yet this was the setting for one of the most important stories of the last Knesset.

Mitzpe Hila, the village where Gilad Shalit lives, is nearby, and this city was at the center of the campaign to free Shalit after his seizure by the Palestinian group Hamas while he was on military duty near Israel’s southern border. It took five years of pushing the country’s political leaders before they reached the deal with Hamas that freed Shalit in 2011. But now, just over one year later, the story is “pretty much forgotten” by locals and politicians alike, pensioner Sammy Abelchinon said. According to Abelchinon, Nahariya has returned to irrelevance.

The city is part of Israel’s periphery, where employment opportunities are limited. As voter Orit Manichols offered the Forward her views, a homeless man passed by. “It’s awful to see people without work, to see homeless people; that’s something you didn’t used to see here,” the 33-year-old supermarket cashier said.

She complained: “I work and work and work, and there isn’t enough money in my salary.” Manichols held little hope for a change resulting from the election. “I don’t think any of the candidates are able to help, but [Prime Minister Benjamin Netanyahu] certainly is there mainly for the rich,” she said.

This sense of abandonment led Manichols to vote for a party on the left. But the same sense of abandonment moved Abelchinon to vote for the right-wing Shas party. Besides complaining of economic marginalization, Abelchinon worries that his region’s security is being overlooked. Nahariya is just seven miles from Israel’s border with Lebanon, and residents constantly worry about the security threat of missiles from Hezbollah, the Shiite militant group there. Abelchinon thinks that rocket attacks from Gaza in the South, and the military campaign that Israel launched last October in response, have dominated the country’s security agenda, at the Galilee’s expense. “They have forgotten about here,” he said of the government.

Midmorning in Haifa, Eyal Beintacher, 32, said that he, too, feels overlooked — not because of where he lives, but because of his generation’s problems. It’s a generation, he says, that struggles to make ends meet. But Beintacher was in an optimistic mood. He saw a direct line from the social protests, which began in the summer of 2011, and the election. “I feel we stand at a crossroads: The people want a change, and even the right realizes that things must change on social issues,” he said, adding,,“I don’t think there’ll be a revolution, but there will be changes.”

Beintacher, who voted for Lapid’s party, said his hope was that incumbent Prime Minister Benjamin Netanyahu of the right-wing Likud party would build a center-right coalition with Lapid instead of a coalition with partners on the hard-line right, such as the ultra-nationalist party Jewish Home.

Rina, a 58-year-old French-language teacher who declined to give her last name, offered a sobering contrast to the sunny Beintacher. For the first time in her adult life, she said, she was not voting. “My country has failed me,” she said gravely.

Rina, whose votes have oscillated from left to right in the past, said that she was disillusioned with the services provided by the state in Israel. She cited the poor hospital care that she claimed her mother was currently receiving as an example. “They all want their seats, they all want their places, but they soon forget about their voters and forget about their promises,” she said.

Rina was also despondent about the prospects for Israeli-Palestinian peace: “My mother came from Morocco, where Jews and Muslims ate couscous from the same plate. Only here is it like this.”

At lunchtime in the mixed Jewish-Arab city of Lod, transport worker Idan Cohen spoke of the cure he has found for his own despondency — the supernatural. Referring to Rabbi Ovadia Yosef, spiritual leader of the Sephardic Haredi party Shas, he said, “Rav Ovadia said that whoever votes Shas will receive a blessing, so I voted Shas.”

It’s striking: Cohen, a man in his 20s with an uncovered, shaven head, has a similar appearance to many of the young people who initiated the 2011 social protests. And some of his concerns echo theirs, as well. “I think a lot about the economy in Lod, where things are difficult,” he said. “I want to be able to buy an apartment, but prices are high.” But he is far from alone in the way he uses his vote to address these issues.

Meanwhile, in South Tel Aviv, voters felt torn. On the one hand, their neighborhoods are economically depressed. Many residents might be drawn to the social agenda of the Labor Party. But on the other hand, there is intense resentment at the influx of thousands of African asylum seekers to the area, and a strong orientation toward the political right, which hurls rhetoric against the Africans, calls for their deportation and shows sympathy for the anger of the locals.

“There’s theft and all sorts of violence here, because of all the Sudanese,” claimed Eytan Levi, 19. Another local youngster, Liel Loni, said, “I’m scared to go out at night because of all of them.” They voted Likud and Shas, respectively, each believing that his chosen party will take the strongest line against the asylum seekers.

Watching large groups of Africans congregating as he emerged from a lottery store, Motti Ashkenazi, who is unemployed, spoke of his alarm at the change in his neighborhood. “These aren’t people who contribute to society,” he said, decrying what he said is a culture of crime and drugs. But as a 60-year-old who lives with his mother because he can’t afford an apartment, Ashkenazi decided to vote on social issues. He chose Labor.

In the notoriously divided city of Jerusalem, supporters of all parties found some common ground — the Jerusalem Mall. Blessed with a national holiday, residents of the city streamed to the shopping center, which by early afternoon was more packed than ever.

But retail therapy wasn’t enough to relax 50-year-old Magi Amar, a teacher. “I don’t want them to divide Jerusalem,” she said, referring to her fear that any politicians to the left of Netanyahu would do so. Amar, who voted for the Netanyahu-led Likud-Beiteinu party, wanted a leader who “stands up well to pressure from the United States.”

Nissim Masika, a 21-year-old yeshiva student, voted for the Haredi-run United Torah Judaism party “because the rabbi said so, nothing more than this.” He believes that one of the most important issues is to prevent plans for Haredim to be drafted into the army. He was unconcerned with economic issues because, he said, as someone who studies Torah full time, his understanding of this subject is “like kids of 12.”

The Haredi draft that Masika is so keen to avoid is exactly the policy that Joel Tessler, a software engineer in his 50s, wants to see enacted. “One of the important issues is the subject of the burden. I see it in my own family, where Haredi relatives aren’t serving while my sons are,” he said. The social protests, combined with the expiration of the law that exempts Haredim from national service, have given new impetus to the decades-old call for a Haredi draft.

The other issue that guided his vote — he chose Yesh Atid — was the peace process. “I realize there isn’t much to talk to on the other side,” he said, “but still I don’t think we’re doing enough.”

Many Jerusalemites spoke of their desire for peace. This ideal, and a desire to see Israel evacuate small settlements as soon as possible, led Yuval Iota, a public sector employee in his 40s, to vote for Likud-Beiteinu. “Who made peace with Egypt? Likud. And who made peace with Jordan? Likud. The left has just brought wars,” he said.

Social worker Asher Rahamim, who voted for the dovish party headed by ex-foreign minister Tzipi Livni, wanted to “strengthen the voice” for a negotiated peace. But he did not believe that any party would actually enter serious negotiations.

In the Etzion settlement bloc in the West Bank, Yoram Bagrish adamantly opposes any abandonment of settlements, though this is widely seen as a necessary part of any peace agreement with the Palestinians. But he believes evacuation of at least some settlements will take place despite his wishes.

“On settlement, it’s not a matter of what I want,” said Bagrish, a 46-year-old Orthodox-Zionist settler from Alon Shvut. “Everyone knows what’s going to be — two states.”

So, instead of voting based on his desire to see pro-settlement policies, Bagrish voted on religion, choosing United Torah Judaism, a Haredi party, because he believes in Israel having a strong religious character.

But Nadav Goldberger, a student in his 20s from the Karmei Tzur settlement, voted the Orthodox-Zionist party Jewish Home, which wants to annex part of the West Bank, based on its pro-settlement credentials. “I want there to be control of the Arabs, so that if someone throws a stone [at a settler], it will be dealt with,” he said.

Palestinians shopping at a supermarket outside Alon Shvut mostly declined to comment on the elections. Hassan Jabar, a Palestinian in his 40’s, said he doubted that the outcome would have any impact on Palestinians. Still, he added hopefully, “Maybe there will be something better.”