Is Sara Netanyahu the Erratic Power Behind Bibi’s Throne? 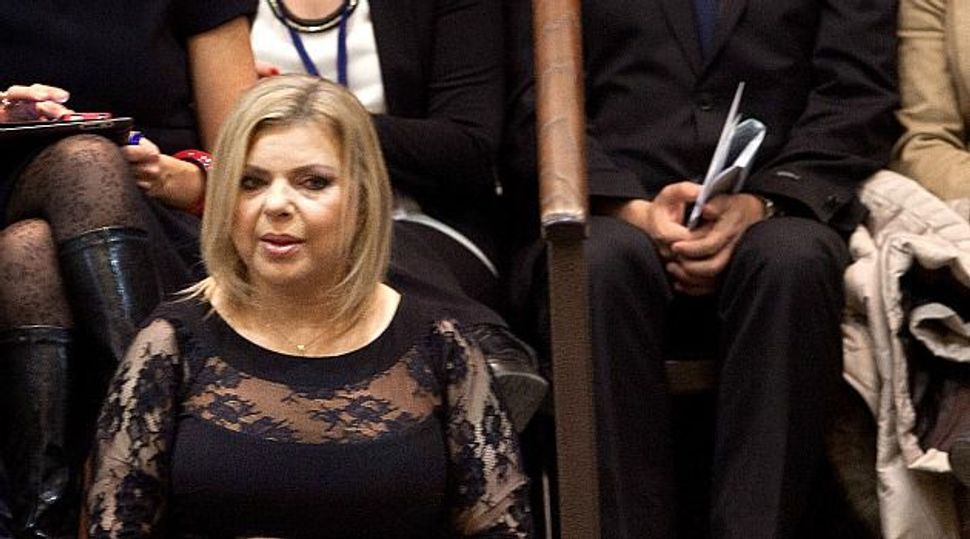 Bibi?s Svengali? Sara Netanyahu was pilloried over the dress she wore to the Knesset opening ceremony. But beyond gossip, critics voice serious concerns about the outsized role she plays in controlling her Prime Minister husband. Image by getty images

Of the many explanations for the long, drawn-out and chaotic coalition negotiations that have followed Israel’s recent election, the most intriguing is that they have more to do with Benjamin Netanyahu’s home life than with his political aspirations.

According to one of Israel’s top journalists, it is his wife’s publicly known antipathy toward one of his main potential coalition partners that pitched Netanyahu into the mire of complications in which his negotiations remained stuck as of the Forward’s print deadline.

“She’s a lot more powerful than him, because he’s afraid of her,” said Ben Caspit, author of an unauthorized biography of the prime minister and, until his recent departure from the Israeli news outlet Ma’ariv, one of its most prolific journalists. “He will never do anything without her approval. He can’t meet people without her approval.”

When the new Knesset was inaugurated February 5, the big headline was the dress that Sara Netanyahu, the prime minister’s wife, chose to wear. One fashion critic famously said that the dress, semi-transparent in parts, made the 54-year-old resemble an advertisement for Michelin tires.

It was a rare moment. She has, for a decade and a half, been treated by a large part of the Israeli public with disdain based on unconfirmed accounts of her erratic behavior, undue political influence and rumors about her personality. Now, suddenly, she was caught on camera.

Netanyahu’s documented offense was, at worst, a fashion crime, but it provided an outlet for frustrations about the many other aspects of her conduct that irk citizens.

“She’s what the media needs — she’s famous for doing stupid things, or things perceived to be unwise,” said Hebrew University political scientist Tamir Sheafer, who is an expert in political communication. “She’s perceived to be too powerful and too involved in the decision making.”

Others counter that such criticism of Netanyahu — a professional child psychologist — is unfair and say more about a misogynist media than about a woman who is the first prime minister’s wife to work outside the home.

Sometimes, suggestions about her influence have come from the prime minister himself — who said that she prompted him to make the deal to free Gilad Shalit, the soldier captured by Hamas whom Israel eventually freed by swapping 1,027 Palestinian prisoners. Sometimes the hints come from his aides. Orit Galili, a senior staff member, commented in 2011 that she is “a full partner in writing his speeches.”

The long-running Sara Netanyahu story started in 1997 with legal claims about her personal conduct. A nanny for the young Netanyahu boys sued her, claiming that she had withheld wages and reporting that she threw shoes at an assistant, complaining that they were cleaned poorly. A year later, a caregiver for Netanyahu’s father claimed that she was forced to work 24 hours a day, seven days a week.

As time has gone on, it has been suggested that Netanyahu’s demands send major ripples into her husband’s work life.

“The most delicate issues in a foreign visit are issues related to her,” a source in Israel’s Foreign Ministry told the Forward, speaking on condition of anonymity because of the subject’s sensitivity. “These are the most sensitive issues, researched to the finest details.” The source added that there is a general feeling in the Foreign Ministry that officials need to be at their “very best” for any component of a visit involving Netanyahu and to hope that if mistakes happen, they are not related to her requirements.

The relationship between the prime minister and his third wife is a source of major speculation in Israel. He reportedly met her when she was working as a flight attendant on El Al, the national airline. They married in 1991 after a short courtship. Two years later, he publicly confessed to having an extramarital affair, but she stood by him, giving rise to rumors of a pragmatic power-sharing pact that binds them to this day.

The idea of such a pact may seem farfetched, but what is clear is that Netanyahu is Israel’s first very public First Lady. Galia Golan, professor of politics at the Interdisciplinary Center in Herzliya, said that before Benjamin Netanyahu’s first stint as prime minister, from 1996 to 1999, prime ministers’ wives (only one had a husband) were far more low key. “It looked like he was importing the American political style of taking his wife everywhere,” she recalled. Today, there is a near-universal understanding in Israel that Sara Natanyahu is intensely involved in her husband’s political work. She is feared by many of his allies, who feel that their continued favor with the prime minister is contingent on currying favor with her.

The Israeli who has followed Netanyahu more than any other is Caspit. He is persona-non-grata to both Netanyahus nowadays, mostly because of his unauthorized biography of the prime minister. But in the past Caspit met with Benjamin Netanyahu despite his wife’s dislike for him. They convened in “safe houses not listed in [Netanyahu’s] itinerary” lest she find out, Caspit told the Forward.

He said: “I have been following this couple and this lady for around 20 years, and I have spoken to most if not all of the people who were there, working with this couple, probably hundreds.”

In Caspit’s account, Sara Netanyahu is the key to understanding one of her husband’s most perplexing missteps following the January 22 election. After the results came in, Netanyahu, whose Likud party won a plurality and the opportunity to form a government, hesitated on the main coalition deals for weeks. Most strikingly, he failed to close a deal with his natural allies, the Jewish Home and Yesh Atid parties. Some observers said that he waited because he wanted to wear them down on their refusal to enter into a coalition that included ultra-Orthodox factions; others said that he wanted to play hardball on ministerial appointments.

Caspit says it was all about Netanyahu herself.

Jewish Home leader Naftali Bennett was Benjamin Netanyahu’s chief of staff from 2006 to 2008 and left following a public falling-out with his boss’s wife. Just before the election, he joked that he and Sara Netanyahu had participated in “a terrorism course together.” Then, after the election, the prime minister kept Bennett, whose party came in third, waiting for a meeting as a parade of other, less crucial factions got appointments. Even Zahava Gal-On, the leader of the tiny dovish party Meretz, who had sworn not to enter the coalition, got in before Bennett.

On February 10, Bennett apologized for his pre-election remark about Sara Netanyahu; on February 11 he was finally granted a meeting.

Caspit commented: “The whole nature of the crisis in coalition building is because she decided [Bennett] is not ‘in.’”

The irony, Caspit added, is that her personal dislikes weakened her husband. In Caspit’s analysis, were it not for Netanyahu’s boycott of Bennett, Benjamin Netanyahu could have quickly built a coalition of Jewish Home and several ultra-Orthodox parties, leaving Yesh Atid in opposition. But Jewish Home knew that she would not let this happen, so it made an alliance with Yesh Atid to stick together — an alliance that, once Yesh Atid’s demands were factored in, ultimately made coalition building difficult.

Some see suggestions of such broad influence as slurs. Sara Netanyahu, they point out, is the first prime minister’s wife to work while her husband is in office. Her defenders say that she is focused on her two sons and on her profession as a child psychologist for the Jerusalem Municipality. If she takes an interest in her husband’s activities, they say, it is only natural.

Others challenge the news media’s portrayal of her personality. Shelly Hoshen, founder of the children’s charity Yad B’Yad, which Netanyahu chaired during her husband’s first term as prime minister in the late 1990s, told the Forward of her kindness, saying that she was “a very good volunteer and open to helping the children.”

Haaretz columnist Kobi Niv blamed the media for their negative portrayal of Netanyahu. “The repeated media attacks on the prime minister’s wife don’t teach us a thing about how the country is managed,” he wrote in February. “But they do teach us a lot about the cowardly, pitiful, misogynist behavior of the Israeli media.

“So leave Sara in peace. She’s not the prime minister. Her husband is.”

Is Sara Netanyahu the Erratic Power Behind Bibi’s Throne?