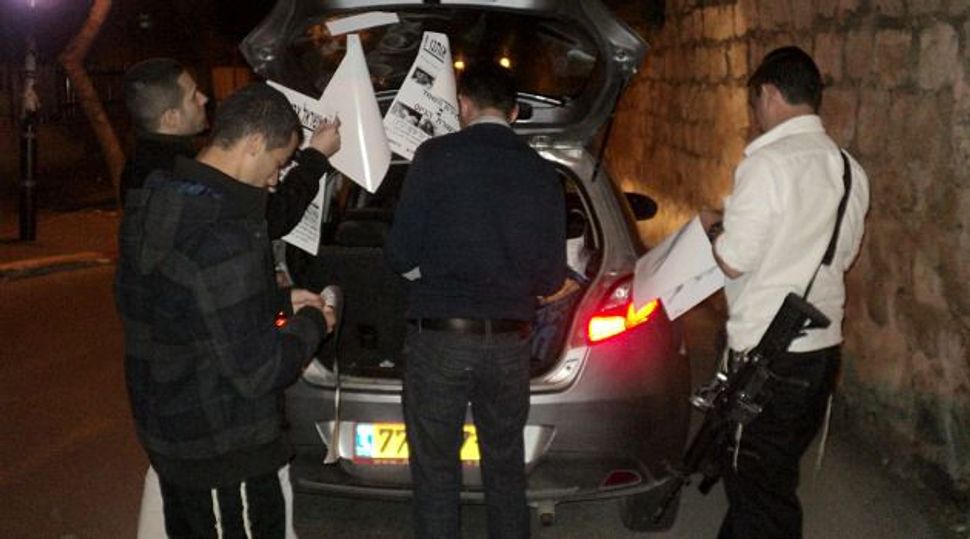 Rebels in the Dark: Ultra-Orthodox youths who support drafting Haredi youth into the Israeli military use traditional ?pashkevil? posters to make their point. Image by nathan jeffay

Dressed in black pants and a white shirt, with an army-issued gun slung over his shoulder and a gun barrel that lines up with his tzitzit, Yehuda does not look like a typical Haredi youth. It’s also true that nice Haredi boys don’t order hard liquor in Jerusalem cafes at midnight. So the 19-year-old asks for ice cream instead and devours it hungrily.

Right now, Yehuda is in need of something to settle his stomach. He is preparing to plunge into a subversive dead-of-night operation in the Haredi community. More than two months after an election dominated by the issue of military enlistment for Haredi men in Israel, the controversy has reached a fever pitch. Negotiations continue over the shape of Israel’s next government, which may decide what policy the country will adopt toward the virtually blanket exemption the Haredim receive from mandatory national military service.

But for all the buzz, there is no national discourse. Instead, there are two almost entirely separate discourses on the issue. And Yehuda means to change that.

In secular society and the secular media, the subject is called the “sharing of the burden.” In highly insular Haredi society and in Haredi media, it is referred to as the “decree of destruction.”

Now, Yehuda and a year-old cloak-and-dagger cell of 20 activists have managed to accomplish what a frenzy of research and proposals by think tanks and Knesset members has failed to do. His group, which calls itself Haredim for Jewish Unity, has raised the pro-draft viewpoint in the heart of the Haredi community, in its own language and using its own unique means of communicating ideas.

In this story, the names of Yehuda and the Haredim in his group have been changed, at their request, to ensure their privacy due to the retaliation they fear they might otherwise suffer.

Parked near the cafe where he eats his ice cream, Yehuda and three allies sit in a hired car with a trunk full of pashkevils — wall posters through which rabbinic judgments and other important information are publicized among Haredim. In a community where the Internet is banned, the pashkevil is the closest thing to a Facebook message.

Like the messages on its digital counterpart, the pashkevils, too, are posted on walls and quickly devoured by the public. But while pashkevils normally declaim the edicts of rabbinic leaders, those in this car trunk brazenly challenge their pronouncements by advocating army service.

“The Jewish People needs us,” one of the notices declares, presenting army service as a mitzvah, or a religious commandment. Another notice simply has a picture of servicemen and a quote from the Mishna, which says that in times of a religiously sanctioned war, “everybody goes, even a groom from under his wedding canopy.” The only contact information is a mobile phone number, which the activists answer without revealing their identities.

The aim of Haredim for Jewish Unity is to pressure leading rabbis to come out in favor of army service and to start breaking the taboo on Haredim even considering service. Yehuda and his comrades hope to increase Haredi recruitment and even to make it a significant trend.

Their goals may seem ambitious, but they say that they are far more realistic than the mainstream politicians who live in their own dream world, believing they can bring about the change through legislation.

“The law is nothing unless there’s an agreement,” Yehuda said confidently. “Rabbis will escort [draft refusers] to prisons. One hundred percent, no question about it, they’ll be heroes.”

It is 1 a.m. by the time the activists reach their first neighborhood of the night, the Haredi stronghold of Zichron Moshe in central Jerusalem. They identify a pashkevil wall, stop the car and affix the posters. There is nobody around, so the posters may stay up until early morning before they are torn down, as they always are. But like wall messages on Facebook, a few hours is all it takes to have a strong impact. After the group’s last postering exchange in the winter, some eight people took the ultimate step of enlisting after getting in touch with the group, Yehuda reports.

Not all the stops are so simple. In the neighborhood of Geulah, the activists stick up posters, drive up a road to turn the car around, and by the time they return find angry Hasidic students from a nearby yeshiva tearing down the posters. Standing near the activists’ car, they express their objections, saying that this is Gur turf and they have no right to place the posters. The exchange is heated, but nothing compared with what comes later in the night.

Just before 2 a.m. in a different part of Geulah, posters are being stuck, when a member of the Boyaner Hasidic community appears and politely asks for copies of them. The activists believe that he is interested in their campaign. He walks in the same direction as they drive, and appears again at their next stop. “You’ll pay for this with your life and your soul,” he suddenly shouts, telling them that he has arranged for Hasidim to remove the posters. “The Zionists want to do nothing except take our religion away.”

Learning that three of the activists are serving soldiers, the Boyaner Hasid yells, “Leave the army and tell them we’re Jews, not goyim.” He tells them: “Do you know why [Israel’s enemies] are not killing us now? Because we’re learning in yeshiva, only because of that.”

After this encounter, the activists worry that the Boyaner may have tipped off residents of Mea Shearim to be vigilant against them. That could mean a dangerous, even physical confrontation. Instead of leaving the car and putting up posters there, they decide to drop the posters out of their car windows while driving through that most hard line of neighborhoods.

As they travel between the pashkevil walls, the activists discuss what motivates them. Mordechai, 22, speaks of the double life he leads, residing in a flat in Jerusalem and going about his military duties, and then returning on weekends to his family home in the Haredi settlement of Modi’in Illit, where he does not speak of his service. His father is a respected rabbi and head of a kollel, or communal Talmud study center, where hardly anybody knows of his son’s secret. The ultimate fear among the small number of Haredim serving, says Mordechai, is that service brings disrepute on families and makes it hard for any members to arrange marriages, or shidduchim.

One of nine children in his family, Mordechai said sadly, “In every family…[enlistment] causes problems for shidduchim…. I have several friends [who enlisted] who can’t go back to their parents, and their parents don’t want to talk by phone — they even sat shiva.”

After initially shunning service due to family and community pressure, Mordechai became a combat soldier a year-and-a-half ago, after he encountered some youngsters serving in a Haredi battalion. But the army, soon realizing the potential that his background and his drive gave him, moved him to a recruitment office.

He views every Haredi soldier signed up now as a tool to achieve a sea change. He predicts that once a critical mass enlists — and the soldiers remain Haredi — the community’s fears will start to recede. “If I marry and I send my children to Haredi schools and then to the army, I will be proving it is doable,” he said.

For David, 24 and also from Modi’in Illit, activism in Haredim for Jewish Unity is a way of coming to terms with his own failure to enlist. “I’m the oldest, and my father said don’t go, and I love my family so I didn’t,” he said. But with encouragement from him, two of David’s brothers resisted parental pressure and signed up. One of his sisters, who is living at home, is of marriage-age, and is now worried about her shidduch prospects. David has no regrets. Having encouraged his brothers, he now wants to encourage others.

Yehuda oozes so much confidence to effect change that it is difficult to believe that he is only 19 — and not even Israeli by nationality. He is from London and serving as a paratrooper with the Mahal program, which allows Diaspora Jews to complete army service before making aliyah.

Educated at a Haredi high school in London, he went to study at a yeshiva in Bnei Brak, an ultra-Orthodox town near Tel Aviv, at 17. A year later, he says that he matured and understood the “obligation” incumbent on him. He decided to sign up for the army.

Yehuda believes that Haredi opposition to army service stems from political, not religious, considerations. Based on his personal encounters, he says that top rabbis “will disagree with me in public but in private they will agree that [service is] intrinsically a mitzvah.” He said that he is determined, through the campaign, to “turn a private yes to a public yes.”