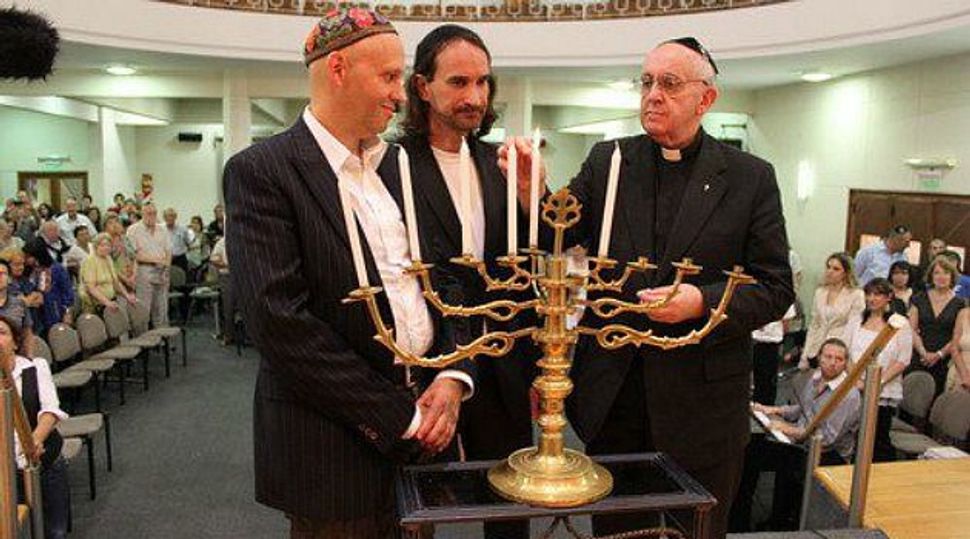 Within hours of the selection of Pope Francis I as the new pontiff, newspapers quoted the heads of the major Jewish agencies saying that Cardinal Jorge Mario Bergoglio was committed to building bridges to the Jewish community. Jewish leaders said they expected to have a fruitful relationship with him.

As a bishop and then cardinal, the pope participated in many interfaith meetings. He was praised by the Jewish community for his compassionate response to the 1994 bombing in Buenos Aires of a seven-story building housing the Argentine Jewish Mutual Association and the Delegation of the Argentine Jewish Association. As a cardinal, he has preached in a synagogue twice, spoken at holocaust commemorations and has visited Israel.

Remarkably, almost no attention has been paid to the fact that the only book written by the Pope currently in print is a dialogue in Spanish between the then-cardinal Bergoglio and a rabbi.

“Sobre El Cielo Y La Tierra (Regarding Heaven and Earth)” is structured as a transcript of a conversation between then-Cardinal Jorge Mario Bergoglio and Rabbi Abraham Skorka, the rector of the Seminario Rabínico Latinoamericano.

The sweeping book skips quickly from discussions of God, fundamentalism, sin, homosexuality, capitalism, money, the poor and many other topics. The future pontiff addresses the role of the Catholic Church in the Holocaust, Argentina’s so-called dirty war and the Mideast conflict in an unscripted, eye-opening way that couldn’t be further from the carefully crafted messages that usually emerge from the Vatican

Because of its important insights into the new pope, ‘Sobre El Cielo Y La Tierra’ has shot to the No. 1 slot for books on religion on Amazon.com.

The most intriguing aspect for Jews may be that the first words the world may read by the new leader of the 1.2-billion member church is a constructive conversation with a rabbi, in which both men encourages interfaith amity. The Pope also shows his familiarity with Judaism and Jewish authors, especially the works of Abraham Joshua Heschel.

The cardinal takes pains to discuss the Holocaust and its impact on the Catholic church in great detail. Bergoglio says that the great question we must all ask about the Holocaust is not “Where was God? But where was man?”

“The great powers just washed their hands — they knew much more than they said they did,” Francis says.

Universalizing the tragic period, the Cardinal declares: “The shoah is a genocide like the other genocides of the 20th century.” But at the same time he acknowledges that “There is something special about an idolatrous construction against the Jewish people.”

The cardinal says Nazism hold a special place in the annals of totalitarianism because of its emphasis on racial purity and its placement of race on a higher plane than the divinity.

“The ideals of a pure race are the idols upon which the Nazis formed themselves … Every Jew that was killed is a strike against the living God in the name of the idols,” he says. “The devil was present in the idols which eased the human conscience.”

When Skorka asks the cardinal about the church during the Holocaust years, the cardinal praises the activities of Pius XI who wrote an encyclical on the eve of the war against racism and anti-Semitism.

Francis is more circumspect about Pius XII, the Nazi-era pope whom some have criticized for failing to take a strong enough stand against the Holocaust. The cardinal reminds readers that Pope Pius XII was praised by Golda Meir and notes the mixed feelings many Jews and Catholics alike have to this day.

“The Church did not say everything that they could have said,” Francis acknowledges. But he then backtracks by offering a defense of the pontiff: “Others say, ‘They could not say more.”

The cardinal agrees wholeheartedly with the need to open up the church’s archives of the wartime years and unequivocally stresses the importance of clarifying the historical record. If Pope Francis follows up on his clearly stated desire, it may help Jewish organizations push for a speedy opening of the Vatican archives, which some have resisted up to now.

“Opening the archives of the shoah seems reasonable,” the future pope says. “Let them be opened and let everything be cleared up. Let it be seen if they could have done something [to help] and until what point they could have helped. If they made a mistake in any aspect of this we would have to say, ‘We have erred.’ We don’t have to be scared of this- the truth has to be the goal.”

The cardinal also discusses the role of anti-Semitism in his homeland of Argentina. He concedes that he had less contact with Jews than others, but insists that bigotry and anti-Semitism has decreased markedly over the years.

“I did not have the same experience as John Paul II of having half of my friends as Jewish, but I have Jewish friends,” he says.

“Yes, there were some anti-Semitic Catholics and today there also are some,” he adds. “But not with the virulence of the 1930’s when there were some ecclesiastic anti-Semitism. Today, the politics of the Argentinian church is clear: inter-religious dialogue.”

The future pontiff is not as direct about the Middle East conflict. In a chapter devoted to the topic, Bergoglio becomes long winded and seeks to deflect political questions into universal discussions.

“At times human relations can be resolved if you have people who can find pathways,” he says, before veering into confusing religious rhetoric. “Conflict is essential to the Bible” going back to Adam, and Eve, then Cain.

On interfaith relations, he is clear and decisive that he not only allows but seeks non-Catholics’ participation in religious events. He urges the active participation of those of other faiths who attend formal events like the instillation of a bishop so that they should not just stand “like dolls in an exhibition case.”

As cardinal, the future pope delivered a synagogue sermon twice and invited the rabbi to speak to Catholic seminary students. He also reached out to evangelical Christians and even the Mapuche, an indigenous South American tribal religion of the spirits.

The cardinal is less than plain-spoken about the role of the Catholic church during the Argentinian military dictatorship of the 1970s. In the book, the so-called ‘dirty war’ is euphemistically referred to as “problems.” Skorka’s synagogue under Rabbi Marshall T. Meyer was a strong critic of the military government.

“What did the Church do in those years?” the rabbi asks.

“(The church) did what an organization which has saints and sinners does. There were some men who combined both of these characteristics,” the cardinal replies. “For me it is one of the most tearful moments that weigh upon our nation.”

The cardinal compared the Argentine church to Chile’s church, which took a much more forceful stance against the Augusto Pinochet dictatorship.

“The way you wanted the Argentinian church to act was the way the Chilean church acted,” the cardinal tells the rabbi. “In Chile the church advocated a decided path, in which they took actions and made pronouncements.”