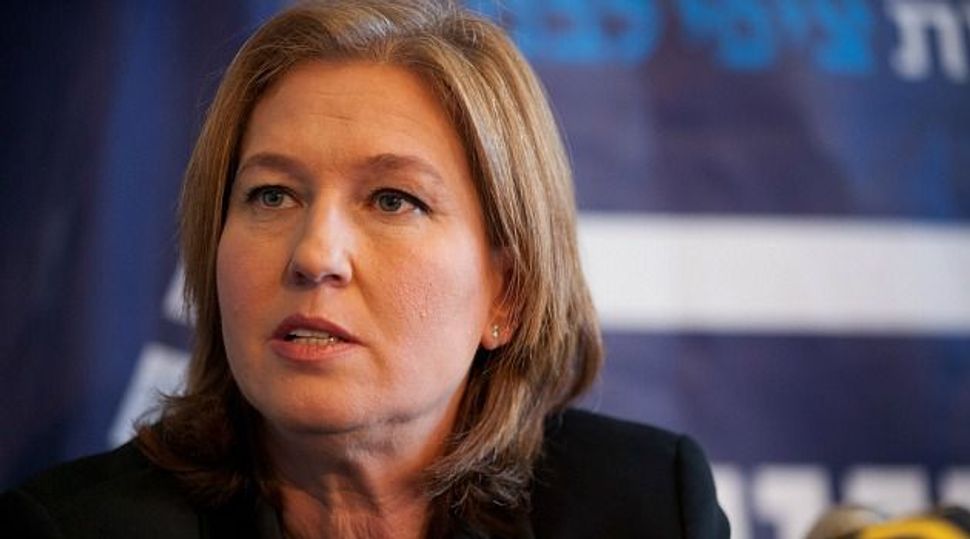 Lonely Voice: Tzipi Livni is a respected moderate in the Israeli coalition government and is supposed to be spearheading peace talks. What future does she have when most of her coalition partners oppose a settlement with the Palestinians? Image by getty images

When U.S. Secretary of State John Kerry visited Israel in early April, he waxed optimistic about getting the Israeli-Palestinian peace process back on track. But even as Israeli leaders smiled in public alongside him, a stubborn reality went unacknowledged: Of the main parties in the new government, only one actually championed restarting the peace process and achieving Washington’s goal of a two-state solution as an urgent national priority.

That Hatnua, also known as the Tzipi Livni Party, is in the coalition government at all is a matter of legitimate puzzlement. In 2009, its leader, Tzipi Livni, who then led the much larger Kadima party, stubbornly refused the entreaties of Likud party leader Benjamin Netanyahu to join his ruling coalition. Her reason for staying out then was precisely the lack of commitment she saw in Netanyahu and his party to the goal of achieving a Palestinian state alongside Israel.

Now, after a stint as opposition leader during which she failed to make an imprint and was subsequently ousted as leader of Kadima, Livni is the junior partner in Netanyahu’s government. She now heads a much smaller party with just six Knesset seats. Yet Livni said her turnaround was necessary to save the two-state solution.

“The other choice was to look from the outside and give to others to make decisions that I believe don’t represent the interests of the State of Israel,” she told the Forward. “My campaign and the reason for me to come back to politics was to fight for an agreement between Israel and the Palestinians.”

Asked what changed between February 2009 and today to make serving under Netanyahu palatable, she pointed to Netanyahu’s July 2009 speech in which he cautiously accepted, despite the misgivings of many in his party, the two-state solution.

But lately, Netanyahu’s 2009 speech notwithstanding, the prospects for achieving a two-state solution look bleaker than ever. On April 14, Salam Fayyad, the prime minister of the Palestinian Authority, whose policies are credited by many Western governments as having laid a practical groundwork for Palestinian statehood, resigned. Many blamed intransigence by the Netanyahu government for having discredited Fayyad and the moderate, pro-diplomacy path he upheld. Livni, however, refused to comment on-the-record about his departure.

The development only underlined the challenge Livni faces. Formally, Livni would seem well placed to advance her cause. She is responsible for the government’s negotiations with the Palestinians, as well as holding the justice minister portfolio.

But it seems doubtful that she has the political clout. Her party is by far the smallest in a government. And her coalition partners include the 12-seat Jewish Home, which opposes a Palestinian state and wants to annex much of the West Bank, and the 31-seat Likud-Beiteinu, in which lawmakers’ attitudes range from skeptical to antagonistic. The 19-seat Yesh Atid party supports a two-state solution but gives it little play. Its priority is domestic issues.

“I don’t think there is any room for optimism with Tzipi Livni,” said Shaul Arieli, a former member of Israeli negotiating teams. Today he is a leader of the Geneva Initiative peace proposal. In his view, Livni simply “doesn’t have the power to push this government.”

The Hebrew University of Jerusalem political scientist Shlomo Avineri noted that from 2006 to 2009, Livni and Ehud Olmert, as foreign minister and prime minister, respectively, were unable to make a peace deal, though both professed a strong commitment to the peace process. “Even if she would be prime minister today, I cannot see how she would be more successful,” he told the Forward, adding, “She isn’t going to do something that is mission impossible.”

Livni ducked when asked if she herself was optimistic about her chances. “This is the only alternative that can preserve the values of the State of Israel as a Jewish democratic state,” she said, “so it’s not whether I’m optimistic or pessimistic. It is more about what needs to be done. What are the interests of the State of Israel? … We believe that maybe there is an opportunity there.”

One limited area where Livni may advance a dovish agenda is on the issue of unauthorized Jewish settlement outposts in the occupied West Bank. “Part of being the justice minister is to enforce law and order,” she said when asked how she would approach them. “This is part of my job.”

In June 2004, Israeli Prime Minister Ariel Sharon promised President George W. Bush to start removing unauthorized outposts — wildcat settlements built without state approval — within 60 days. But only a handful of them have been demolished. Netanyahu’s last government tried hard to avoid action against them. In fact, his right-leaning justice minister, Yaakov Neeman, actually began the process of retroactively legalizing 11 outposts.

“In the last two to three years, the Netanyahu government has placed a lot of pressure on the attorney general and on [state] lawyers,” said Michael Sfard, the human rights lawyer who represents Palestinian landowners and Israeli nongovernmental organization in most outpost-related cases.

In Sfard’s view, “the role of the minister of justice is to be a shield from such pressures,” and Neeman didn’t live up to this, but he is upbeat about his successor. “I hope that Livni will be more of a shield to such pressures; it seems she’s more respectful of the attorneys in her office.”

Beyond the peace process and outposts, Livni’s legal philosophy remains unclear. A wide spectrum on the left criticized Neeman for his moves to strengthen parliament at the expense of the courts. For example, he initiated a push for a new Basic Law — the closest thing Israel has to articles of a constitution — that would have allowed 65 of the Knesset’s 120 lawmakers to revive any law that the Supreme Court throws out as illegal.

Yoram Shachar, a law professor at the Interdisciplinary Center in Herzliya, said that he expects Livni to be preoccupied mostly with efforts on the peace process and to invest little energy in the Justice Ministry — and no energy in changing the balance of power between legislature and the courts. On the other hand, he added: “Would she further weaken the courts? The answer is an absolute no.”