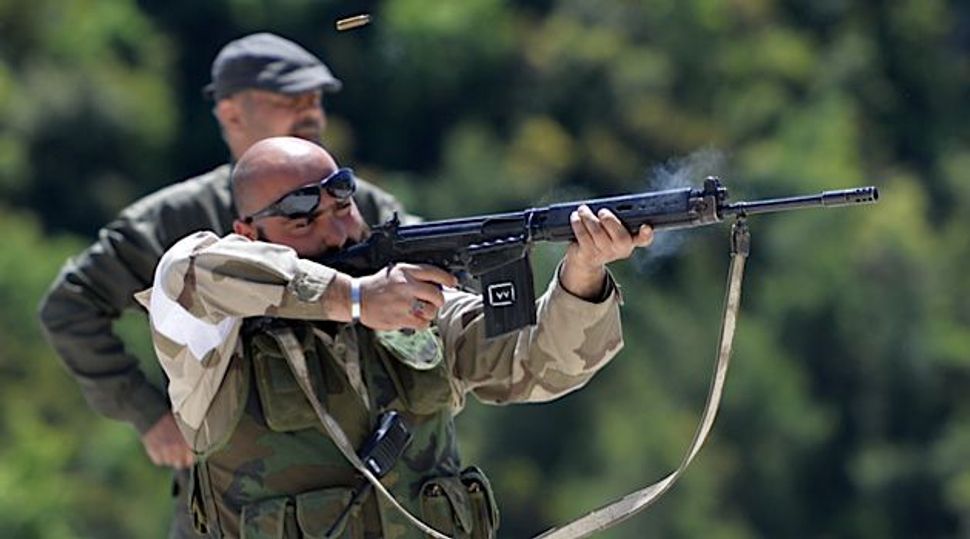 Tough Fight: Syrian rebels are pressing their fight against the Damascus regime. Despite concerns, pro-Israel advocates are staying neutral on the question of whether the U.S. should arm the rebels. Image by Getty Images

Israel and its supporters in the United States are so far not challenging proposals to send ammunition and even light artillery to some Syrian opposition groups, despite fears that those arms could end up in the hands of fighters committed to global jihad.

An official with the American Israel Public Affairs Committee, the largest pro-Israel lobby, said the group has not taken a position on proposed legislation calling for the arming of certain opposition groups, or on the broader issue of arming the Syrian opposition.

Meanwhile, in Israel, a government official explained that Jerusalem is focused only on arms capable of changing the regional balance — a concern that leads Israel to worry more about the Syrian government’s arms build-up as it battles to put down the opposition.

The weapons that worry Israel include Russian-made S-300 anti-aircraft systems that could pose a threat to Israeli air superiority. Russia recently agreed to send these weapons to Syria despite Israeli entreaties.

Israel is also determined to block advanced surface-to-surface missiles from being transferred to Hezbollah from Iran via Syria.

“Bullets and mortars,” the Israeli official said, “are for internal fighting” and therefore are not of great concern to Jerusalem.

Recent events on the ground further highlighted Israel’s focus on Syria’s military, not on potential future threats from armed opposition groups. On May 21, forces loyal to Syrian President Bashar al-Assad fired at an Israeli military vehicle patrolling the border in the Golan Heights. Israel responded with gunfire directed at a Syrian army outpost and with a stern warning from its armed forces chief of staff, Benny Gantz, that Assad will “bear the consequences” of any escalation along the border.

Israeli officials, however, have made clear that they will not intervene in the Syrian civil war, including by taking a position regarding American military aid to opposition forces.

That could make the work of Syrian opposition representatives in Washington somewhat easier.

With no end in sight to the carnage in Syria’s civil war, activists from opposition groups are lobbying the administration and Congress to begin arming the rebels with American-made weapons.

The move, they say, could tip the balance in favor of the opposition and hasten Assad’s departure — an outcome Washington publicly supports — without requiring American boots on the ground or an expensive and dangerous air raid campaign.

“Arming the rebels may be the least expensive option,” said Louay Sakka, co-founder of Syrian Support Group, the only organization permitted under American law to provide direct support to Syrian rebel groups.

Sakka argued that those who fear that introducing more arms into the already bloody civil war would just worsen the situation are hiding their heads in the sand. “It’s very comfortable when nobody wants to get involved,” he said. “Are you protecting the minorities [in Syria] by not getting involved?”

But in Washington, many fear a scenario in which American weapons eventually end up in the hands of jihadist groups that will use them against the United States and its allies in the region, which include not only moderate Sunni countries, but also Turkey and Israel.

“Once the weapons are inside Syria, what we’ve seen is that they are fungible,” said Jeffrey White, defense fellow at the Washington Institute for Near East Policy. “They move to different groups; they move around the country; they’re sold; people use them to gain influence, trade influence.”

In Syria, the situation on the ground appears deadlocked amid heavy fighting and widespread carnage. Recently, government forces have even been gaining back some lost ground. While opposition fighters possess enthusiasm and significant support from the Syrian public, forces loyal to Assad have the strength and the stockpiles of weapons and ammunition from the Syrian army on their side.

“What I noticed when I was in Syria is how hugely significant the lack of ammunition and of a reliable stream of weapons was,” said Elizabeth O’Bagy, who recently joined the Washington-based Syrian Emergency Task Force as political director. “Rebel forces faced situations in which they ran out of ammunition in the middle of a battle.”

O’Bagy, a former researcher at the Institute for the Study of War, who focused on Syria, is now trying to convince policymakers and elected officials in Washington to step up military support for the Syrian opposition, primarily by supplying ammunition and arms.

“People on the Hill tell me that the rebels don’t really need anything,” she said of the chilly response her appeals receive on Capitol Hill at times.

Still, Congress has been more forthcoming than the administration. A bipartisan bill written by the top members of the Foreign Relations Committee is on its way to the Senate floor after clearing the committee May 21.

The bill, co-sponsored by Democratic Chairman Robert Menendez and ranking Republican Bob Corker, would supply the opposition with weapons but place limitations on the types of arms they could receive and establish strict criteria for groups that could receive them. The administration would be required to carefully vet groups receiving arms from the United States to ensure that they do not violate American positions on human rights, terrorism and nonproliferation. The legislation would also prohibit shipping to the opposition advanced anti-aircraft systems, which could threaten Israel.

According to Foreign Relations Committee staff members, pro-Israel activists were aware of the details of the bill and did not lobby against it.

Nevertheless, experts question whether the process outlined in the Senate bill can ensure that weapons are not transferred to other militias or otherwise obtained by jihadist groups.

Officials in the United States fear in particular that American weapons could end up in the hands of such groups as the Salafist front Jabhat al-Nusra, which is affiliated with Al Qaeda, or Ahrar al-Sham, a local jihadist organization. These groups and others, some homegrown and some consisting of foreign fighters who entered Syria after the civil war began, could lead Syria on a route to extremism and anti-American policy after Assad is toppled, say critics of the proposed arms transfers, and they could make use of American-made arms to reach that end.

Opposition supporters in the United States have been urging the administration to take a different approach, one that does not emphasize vetting each and every group and individual. “If you empower a system, a structured organization, then you have a solution,” Sakka said. “But if it’s not empowered to become a solution, you’re just thinking about Abu Muhammad and Abu Ali and where is he from and what’s his background, and this will not help.”

By “empowering,” opposition activists mean funneling American weapons through one single structure, turning it into the main fighting force and thus making it attractive to supporters. Currently, they claim, Syrians who wish to fight the Assad regime join whichever militia they feel is most effective, thereby giving an advantage to small and at times extreme groups that enjoy generous funding from Gulf countries.

The Syrian opposition representatives in Washington would like to see the Obama administration direct its support to the Supreme Military Council, which, headed by Salim Idris, has emerged as the umbrella organization for many of the non-jihadist opposition groups.

Activists also seek to assuage concerns from the United States about the types of weapons needed. All they need in order to give the opposition an advantage, they say, is a steady and reliable supply of ammunition and of 120 mm mortar shells to fight off Assad’s forces in and outside population centers. They’d also like shoulder-launched anti-aircraft launchers, commonly known as MANPADs, to deter Assad from using his air force against rebels.

Opposition representatives and experts agree that this relatively short shopping list, made up of weapons that cannot threaten Israel, could make a world of difference on the ground.

“Establishing a sure logistic system and providing them with some additional weapons,” White said, “should give the rebels enough, provided we also provide the ammunition, to change the balance.”